Comments (0)
Add to wishlistDelete from wishlist
Cite this document
Summary
Counseling prisoners involves multiple ethical and therapeutic choices and risks. Prison environments emphasize external control and security. Thus, work in such settings challenges the role of the counselor as a facilitator of client responsibility for independent decision making."1 This was no less true of me as I sat down to talk to a prisoner about his situation.
…
Download full paperFile format: .doc, available for editing
HIDE THIS PAPERGRAB THE BEST PAPER91.7% of users find it useful 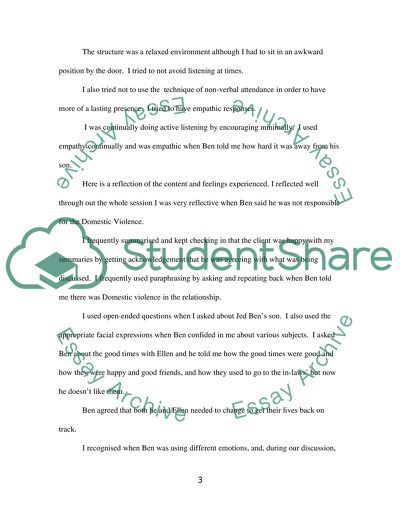 CHECK THESE SAMPLES OF Observation and Reflective Feedback Worksheet

... not only to people borrowing the money and lenders, but the community in general. Some of consequences borrowers suffer from this are: moving costs, family separation, and problems getting credit loans later on. Creditors are faced with the problem of the deficit between the sales price and the stability of the mortgage and its costs. Frame (2010) described that the general impact to the society reflects properties being reduced in price and costs to the community such as increasing delinquency activity, particularly to vacant homes. To explain the surge of foreclosures, Tatom (2009) had written that in the last quarter in 2006, this foreclosure problem was first noticeable. The foreclosure rate was pretty stable at about 1% in 2005...
1 Pages(250 words)Essay

Initial therapy is without the use of DAF, where the stutterer is trained to use a s...

...Observation Paper on STRESS at a Local High School Football Game Football is a high quality game which necessitates a lot of potentiality and management of various kinds of stress associated with the game. Stress can be defined as the organism’s total response to a particular environmental demand or pressure. Physical, and psychological( emotional and mental) pressures play vital roles in a high school football game as the players, the parents, other spectators, officials, coaches, and referees have to undergo a great amount of stress as the game is in progress. This large amount of stress can affect the normal behavior pattern of all the people involved in the game and people tend to be aggressive and pressure ridden, depending upon...
10 Pages(2500 words)Assignment

...Reflective ment Content Reflective ment Introduction 3 Experience 4 Thought 5 Feeling 6 Reflection 7 Putting theory into practice 8 1. Professional development action plan 9 Overall objective 10 Key area of focus 10 Breaking down of tasks 10 Time schedule 11 Resource identification and methodology 11 Measurement review 12 Reference 13 Reflective statement Introduction I have come from Georgia to UK for my Masters Degree in International Management. I have primarily opted for this stream of management because the study is highly relevant in the contemporary environment of rapid globalization. The world is fast moving towards a multicultural environment...
7 Pages(1750 words)Personal Statement

...Business Process Management Reflective Analysis Table of Contents Business Strategy & Value Chain Analysis 3 Enterprise Architecture and Business Strategy 4 Process Modelling – Introduction to BPMN 7 References 9 Business Strategy & Value Chain Analysis The word ‘strategy’ has been one of the most significant words in the world of business over the past century. The term is originated from the word ‘Strategos’ which is a Greek word (Strecker, 2009). Effective strategies are the key to success for any organization in the present competitive business scenario. Several definitions of ‘strategy’ are available in both academic as well as business arena. According to Chandler’s opinion, strategy refers to “the determination of the basic...
6 Pages(1500 words)Research Paper

Teacher’s accent was British but he tried to sound as neutral as possible. There was more enunciation in his words.

The teacher explained to the students that the second handout contained multiple choice questions and true & false statements. After reading the picture stories, they had to fill in the spaces on question papers with the correct answers.

After filling in the question paper the teacher asked the students to practice reading aloud from an English storybook. He did not invite any particular student, the rule was the student sitting in the last row furthest away from the teacher was to read first; just one paragraph. The second was to be read by the next student and so on.

An Alternative Approach to an Epistemology of Observation

To a large part, these two categories of the means by which humans are able to engage the world around them and determine useful inference are largely true; however, there are a few notable exceptions to this. Rather than merely glossing over these exceptions and emphasizing upon the broad applicability of this particular determination of human thought and knowledge acquisition, it will be the express intent of this particular analysis to define the ways in which this statement is correct – as well as define the way in which this statement is incorrect and ultimately misses the mark of understanding the human experience and the means by which knowledge is obtained/achieved. Though such a careful deconstruction of the above s...
7 Pages(1750 words)Assignment

A Reflective Summary of the English 131 Class

In addition to the systematic course approach, I have also learned a lot from self-reflection allowed by assigned writing projects. Most importantly, I have come to appreciate the notion that, irrespective of the actual writing project and format applied, understanding proper techniques that make for good writing can enable one to create properly crafted and understandable work. The essays compiled in this portfolio demonstrate the progress I have made thus far, and I believe that the subsequent critical analysis of the four writing outcomes illustrates this improvement as well.
In consideration of the first outcome, I was expected to showcase knowledge of various strategies that writers make use of, in different contexts of...
9 Pages(2250 words)Assignment

...Reflection This paper offers my reflection on the teaching experience using two different versions of lesson plan with my peer. The reflection is about the experience of vocabulary teaching to the upper intermediate English language learners that I shared with my partner. We selected the task-based method to teach vocabulary. It was a student-centered approach that required the students to work in groups and practice together. Version 1 had three stages; pre-task, the cycle, and post-task and it was conducted by my partner. In the pre-task, she introduced a lesson to the students and asked them a set of questions drawing upon vocabulary. To achieve this, she used a cover book’s picture in the text. The objective of this exercise...
7 Pages(1750 words)Scholarship Essay
sponsored ads
Save Your Time for More Important Things
Let us write or edit the case study on your topic "Observation and Reflective Feedback Worksheet" with a personal 20% discount.
GRAB THE BEST PAPER

Let us find you another Case Study on topic Observation and Reflective Feedback Worksheet for FREE!