Comments (0)
Add to wishlistDelete from wishlist
Cite this document
Summary
According to the American National Institute of Health, obesity is defined as "an excess of body fat that frequently results in a significant impairment of health." Clinically, its definition is based on the ratio between the Body Mass Index (BMI) and the square of body's height in meters…
Download full paperFile format: .doc, available for editing
HIDE THIS PAPERGRAB THE BEST PAPER98.1% of users find it useful 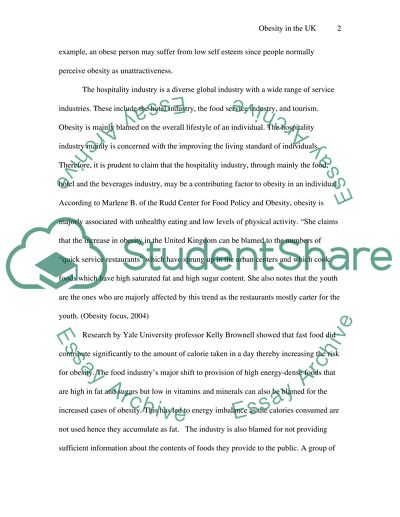 Extract of sample "Obesity in UK"

Download file to see previous pages (Obesity Focused (2001) According to the obesity society, an estimated 200 million adults and 18 million under the age of five were obese in 1995. It also estimates that over 300 million individuals are currently obese in the world (WHO, 2004).
In the United Kingdom, about 46% of men and 32% of women are overweight (with a BMI of 25-30) while an amazing 17% of men and 21% of women are obese. It also reports that, in the developing world alone, currently more than 115 million individuals are obese. Obesity is majorly attributed to poor eating habits, unchecked lifestyles, insufficient sleep, smoking, use of medication, pregnancy, family history, among other factors. Its health risks cannot be undermined as it causes a wide range of diseases such as diabetes mellitus, hypertension, stroke, cardiovascular diseases and certain types of cancers. Other risks include mechanical disabilities like varicose veins, metabolic disorders like Gall stones, and even decreased life expectancy. It is also likely to cause a number of psychological and social problems within an individual. For example, an obese person may suffer from low self esteem since people normally perceive obesity as unattractiveness.
The hospitality industry is a diverse global industry with a wide range of service industries. These include the hotel industry, the food service industry, and tourism. Obesity is mainly blamed on the overall lifestyle of an individual. The hospitality industry mainly is concerned with the improving the living standard of individuals. Therefore, it is prudent to claim that the hospitality industry, through mainly the food, hotel and the beverages industry, may be a contributing factor to obesity in an individual.
According to Marlene B. of the Rudd Center for Food Policy and Obesity, obesity is majorly associated with unhealthy eating and low levels of physical activity. "She claims that the increase in obesity in the United Kingdom can be blamed to the numbers of "quick service restaurants" which have sprung up in the urban centers and which cook foods which have high saturated fat and high sugar content. She also notes that the youth are the ones who are majorly affected by this trend as the restaurants mostly carter for the youth. (Obesity focus, 2004)
Research by Yale University professor Kelly Brownell showed that fast food did contribute significantly to the amount of calorie taken in a day thereby increasing the risk for obesity. The food industry's major shift to provision of high energy-dense foods that are high in fat and sugars but low in vitamins and minerals can also be blamed for the increased cases of obesity. This has led to energy imbalance as the calories consumed are not used hence they accumulate as fat. The industry is also blamed for not providing sufficient information about the contents of foods they provide to the public. A group of obesity activists in the United Kingdom is claiming that the menu should be labeled with information that would help individuals control their choices of food, thereby enabling them to limit or avoid those foods that would increase the chances of them being obese. This they propose, is to be done by making it mandatory for restaurants to include in their menus a data showing the calorie count of respective foods. They claim that this would enlighten consumers as they order meals. Most people in the society do not understand effects of the foods ...Download file to see next pagesRead More
Share:
Tags
Cite this document
(“Obesity in UK Essay Example | Topics and Well Written Essays - 2250 words”, n.d.)
Retrieved from https://studentshare.org/miscellaneous/1508264-obesity-in-uk

CHECK THESE SAMPLES OF Obesity in UK

Increase in Obesity in UK

...Outline Introduction 2. Obesity Problems i. Definition ii. Statistical Results iii. Impact on Health 3. Causes of Obesity a. Behavior Dimensions i. Unhealthy Food ii. Advertising and Fast Food Industry b. Lack of Physical Activities 4. Prevention of Obesity a. Nutrition Solutions b. Physical Activities c. Promotion of Healthy Life Style d. Dietary Supplements: Chitosan 5. Conclusion Increase in Obesity in UK Introduction Eating is one of the most essential processes in human life which supplies human body with energy and mineral elements. Every epoch nation creates its own values and standards towards eating and eating habits based on cultural and economic perspectives. The beginning of the 21st century is marked...
10 Pages(2500 words)Essay

...1. Assess the key macro factors that have influenced the UK grocery retailing industry since the early 1960s. The concept of organisational change is inherently intertwined with external threats and opportunities, which businesses must adapt to as part of strategic planning to continue long term growth. Senior and Fleming argue that the concept of organisational change has many faces, namely “convergent changes and transformational change that is organisation wide and characterised by radical shifts in strategy, mission values and associated changes of structures and systems” (In Thompson & Martin, 2005, p.41). Moreover, Johnson et al highlight that external macro-economic factors intrinsically impact strategy management and without...
13 Pages(3250 words)Assignment
sponsored ads
Save Your Time for More Important Things
Let us write or edit the essay on your topic "Obesity in UK" with a personal 20% discount.
GRAB THE BEST PAPER

Let us find you another Essay on topic Obesity in UK for FREE!