Comments (0)
Add to wishlistDelete from wishlist
Cite this document
Summary
The merge between Oracle and PeopleSoft will help the consumers in the long run because both companies are leaders in the industry and their cooperation will result in better products and cheaper prices for the end users. After reading the first article, the impression that Oracle wants to merge with PeopleSoft for any cost raises some hesitation whether the company takes into account the needs of consumers or is willing to extend its operations and gain market share through elimination of one of the major competitors…
Download full paperFile format: .doc, available for editing
HIDE THIS PAPERGRAB THE BEST PAPER91.9% of users find it useful 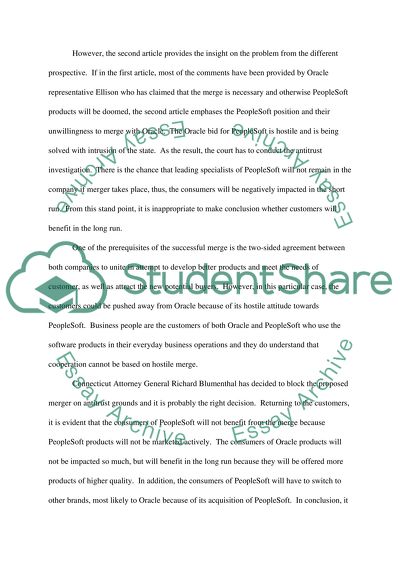 The merge between Oracle and PeopleSoft will help the consumers in the long run because both companies are leaders in the industry and their cooperation will result in better products and cheaper prices for the end users. After reading the first article, the impression that Oracle wants to merge with PeopleSoft for any cost raises some hesitation whether the company takes into account the needs of consumers or is willing to extend its operations and gain market share through elimination of one of the major competitors. However, PeopleSoft producers the specialized software programs for managing human resources while Oracle has a different specialization. So why would Oracle need this merge
As Ellison has noted, Oracle will continue supporting and improving PeopleSoft products if acquisition takes place. However, further he adds that the PeopleSoft products will not be integrated into Oracle offerings and PeopleSoft programmers would have to rewriter the most important functions from the scratch as part of the new Oracle software. Following these two contradicting claims, the conclusion can be made that Oracle just wants to eliminate the dangerous competitor while the interests of PeopleSoft customers are not taken into account at all.
In addition, Ellison has claimed that mergers with other smaller rivals are of no interest for Oracle, probably because they do not present the threat for Oracle market standing. Nevertheless, in the long run the merge will prove to be beneficial for the consumers because the company will be able to use specialists of PeopleSoft as the tool to develop new programs aimed at making data easier to manage. Both Oracle and PeopleSoft focus on stand-alone products and probably would not survive and meet growing demands of customers. The PeopleSoft have limited offerings and merge with Oracle provides the opportunity to become the team within the larger structure and accelerate the consolidation among the vendors. Customers will benefit from improved products.
However, the second article provides the insight on the problem from the different prospective. If in the first article, most of the comments have been provided by Oracle representative Ellison who has claimed that the merge is necessary and otherwise PeopleSoft products will be doomed, the second article emphases the PeopleSoft position and their unwillingness to merge with Oracle. The Oracle bid for PeopleSoft is hostile and is being solved with intrusion of the state. As the result, the court has to conduct the antitrust investigation. There is the chance that leading specialists of PeopleSoft will not remain in the company if merger takes place, thus, the consumers will be negatively impacted in the short run. From this stand point, it is inappropriate to make conclusion whether customers will benefit in the long run.
One of the prerequisites of the successful merge is the two-sided agreement between both companies to unite in attempt to develop better products and meet the needs of customer, as well as attract the new potential buyers. However, in this particular case, the customers could be pushed away from Oracle because of its hostile attitude towards PeopleSoft. Business people are the customers of both Oracle and PeopleSoft who use the software products in their everyday business operations and they do understand that cooperation cannot be based on hostile merge.
Connecticut Attorney General Richard Blumenthal has decided to block the proposed merger on antitrust grounds and it is probably the right decision. Returning to the customers, it is evident that the consumers of PeopleSoft will not benefit from the merge because PeopleSoft products will not be marketed actively. The consumers of Oracle products will not be impacted so much, but will benefit in the long run because they will be offered more products of higher quality. In addition, the consumers of PeopleSoft will have to switch to other brands, most likely to Oracle because of its acquisition of PeopleSoft. In conclusion, it is unreasonable to make assumption about the long run benefits of the merge; while the short run the consumers of both companies will be impacted differently.
Works Cited
Bank, David. "States to Investigate Oracle Bid; Attorneys General Agree To Cooperate, Share Costs To Review PeopleSoft Offer." Wall Street Journal. (Eastern edition) 1 Aug 2003: A2.
Menn, Joseph. "Ellison Talks Tough on Bid for PeopleSoft; Oracle's CEO says only antitrust regulators would deter him from pursuing the rival software maker." Los Angeles Times 10 July 2003: C.1 Read More
Share:
Tags
Cite this document
(“Market Structure Essay Example | Topics and Well Written Essays - 500 words”, n.d.)
Market Structure Essay Example | Topics and Well Written Essays - 500 words. Retrieved from https://studentshare.org/miscellaneous/1508067-market-structure

CHECK THESE SAMPLES OF Market Structure

..., there is a decrease in the consumer surplus as they are charged more for every unit purchased. The increase in the producer surplus is usually high for mergers but the decrease in the consumer surplus is higher than the increase in the producer surplus. As a result, there is a dead weight loss in the market. In case of efficiency, as mentioned above, this is not the case. The market structure of mergers also means that there are increased barriers to entry. The mergers in order to retain their market share increase the barriers to entry so that it is difficult for new firms to enter. This again affects the overall efficiency of the market and the...
6 Pages(1500 words)Essay
sponsored ads
Save Your Time for More Important Things
Let us write or edit the essay on your topic "Market Structure" with a personal 20% discount.
GRAB THE BEST PAPER

Let us find you another Essay on topic Market Structure for FREE!