Comments (0)
Add to wishlistDelete from wishlist
Cite this document
Summary
India is the third largest economy in the world according to the measures of purchasing power parity with a GDP of 1 trillion USD as measured in 20071. It is one of the fastest growing economies of the world after China and posted a GDP growth rate of around 9.4% in the fiscal year 2006-07…
Download full paperFile format: .doc, available for editing
HIDE THIS PAPERGRAB THE BEST PAPER92.2% of users find it useful 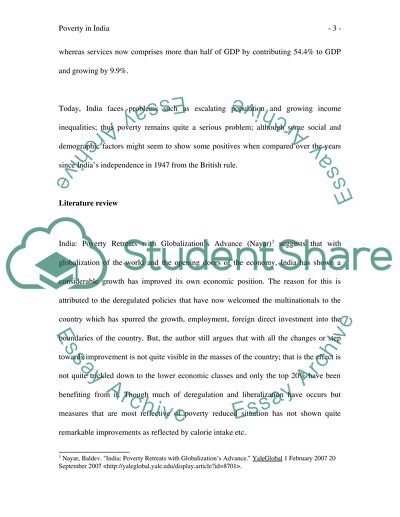 Extract of sample "Poverty in India"

Download file to see previous pages About 29% of the population lives below the national poverty line; other estimates2 that are the indication of the current situation of India which will be used for further analysis of the situation include the infant mortality rate is 62 per 1000 births; child malnutrition for under 5 years old is 47%; around 86% people have access to an improved water source, and literacy is supposed to be around 61%.
India was basically an agriculture based economy, in the year 2005, agriculture's proportion to GDP has been declining as the economy is progressing and agriculture was 18.3% of GDP and showed a growth was 6% year on year basis, industries' contribution was 27.3% and it posted a growth of 9.4% in which manufacturing grew at a rate of 9.1% whereas services now comprises more than half of GDP by contributing 54.4% to GDP and growing by 9.9%.
Today, India faces problems such as escalating population and growing income inequalities; thus poverty remains quite a serious problem; although some social and demographic factors might seem to show some positives when compared over the years since India's independence in 1947 from the British rule.
India: Poverty Retreats with Globalization's Advance (Nayar)3 suggests that with globalization of the world and the opening doors of the economy, India has shown a considerable growth has improved its own economic position. The reason for this is attributed to the deregulated policies that have now welcomed the multinationals to the country which has spurred the growth, employment, foreign direct investment into the boundaries of the country. But, the author still argues that with all the changes or step towards improvement is not quite visible in the masses of the country; that is the effect is not quite trickled down to the lower economic classes and only the top 20% have been benefiting from it. Though much of deregulation and liberalization have occurs but measures that are most reflective of poverty reduced situation has not shown quite remarkable improvements as reflected by calorie intake etc.
Strategies for Combating Poverty in India, as mentioned earlier that the biggest challenge countries like India are facing today are to combat poverty; this article also highlights the same issue and discusses some of the ways poverty can be tackled in India. The article pinpoints that it is the policies of the government, and its priorities that are irrational and misplaced respectively; therefore, government over these last many years has failed to get rid of such a menace from the country. According to the author is important that the government should channel national resources in the right manner and to the desired objectives; first recommendation relates to unemployment, and suggestion is made regarding the law which should guarantee employment to be enacted, and if the state fails to provide employment then minimum wages in lieu should be paid to the unemployed too. Next, it suggests that for people it is necessary to develop skills, increase their productivity in areas including, health, education, agriculture, infrastructure, technology etc. because according to the author poor are poor because they lack such skills and there is no focus on their skill development.
Poverty in India (Jaya)4 states the measures of poverty in India. The article points out that the most popular estimate of poverty measure is by making use of household consumer ...Download file to see next pagesRead More
Share:
Tags
Cite this document
(“Poverty in India Research Paper Example | Topics and Well Written Essays - 2750 words”, n.d.)
Retrieved from https://studentshare.org/miscellaneous/1507818-poverty-in-india

CHECK THESE SAMPLES OF Poverty in India

Can E-Commerce and Alleviate Poverty in the Developing World

On the other hand, this research is rather indicative of the first trends characterized by the expansion of e-commerce globally. E-commerce has become today the main ‘tool’ for the development of business activities even for companies that were traditionally related to specific regions or companies that have rejected primarily the e-commerce as a ‘tool’ for the increase of their performance. On the other hand, it should be admitted that the USA is the country where is e-commerce has been chosen as a primary tool of the trade for business activities. Other countries around the world are also participating actively in the use of e-commerce as a valuable entrepreneurial strategic tool. It should be noticed how...
15 Pages(3750 words)Assignment

HIV/AIDS with Particular Emphasis on Poverty

“Several years of experience in addressing the HIV/AIDS epidemic have confirmed that the promotion and protection of human rights constitute an essential component in preventing transmission of HIV and reducing the impact of HIV/AIDS”3 “It is trite to say that law cannot be a panacea for all social ills… the use of criminal law will not be counter-productive, and it will not do more harm than good.4” Hence, special attention should be given to the principle of non-discrimination and equality, and the principle of due process, of international human rights norms, when crafting legislation or policy related to HIV/AIDS, in the light of past and ongoing discrimination and stigma against people living wi...
9 Pages(2250 words)Assignment

The Republic of India found South of Asia is by far the world’s most populous democracy and ranks seventh largest in terms of geographical area (Brown, 1994). India is also the second most highly populated country in the world. The country has a rich culture with four major religions having originally emerged from it; Sikhism, Buddhism, Hinduism, and Jainism. The Indian Republic consists of seven union territories and 28 states and ranks twelfth la...
8 Pages(2000 words)Case Study
sponsored ads
Save Your Time for More Important Things
Let us write or edit the research paper on your topic "Poverty in India" with a personal 20% discount.
GRAB THE BEST PAPER

Let us find you another Research Paper on topic Poverty in India for FREE!