Comments (0)
Add to wishlistDelete from wishlist
Cite this document
Summary
It is after profound consideration and deep introspection that I have decided to write a few lines to clarify, nay elucidate a fundamental, vital and critical issue, about science being beneficial to common man or science being an instrument of pure elitist pleasure…
Download full paperFile format: .doc, available for editing
HIDE THIS PAPERGRAB THE BEST PAPER94.8% of users find it useful 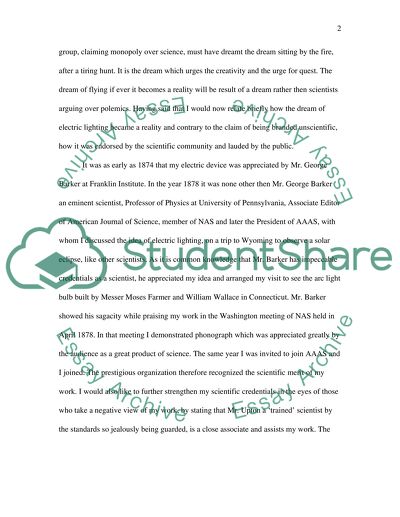 Download file to see previous pages In my estimation, A scientist trained in the formal disciplines of Physics or Chemistry, engaged in academic activity can not claim superiority over a Scientific Man who by using his gifted faculties is able to translate his informal knowledge of science in to products of common use which actually are the raison-de-etre of science.
I would like to pose a question that, what is the reason that prompts us to engage ourselves in the quest to understand what exists around us My answer is to seek benefit for humanity. A quest for knowledge cannot be and should not be an end in itself but should be aimed and directed at transmitting benefits to the people. The allegation that ideas conceived by some 'scientists' earlier are picked up by someone not formally trained in Scientific Disciplines are made in to products which can be used by ordinary people requires a response. I would like to argue that nothing can be termed as purely original, human mind has been thinking and dreaming since eons. We are specie of dreamers; God has granted us this unique ability, rather a superior ability among other animals. If a scientist thinks of a theory, I am sure someone not belonging to the select group, claiming monopoly over science, must have dreamt the dream sitting by the fire, after a tiring hunt. It is the dream which urges the creativity and the urge for quest. The dream of flying if ever it becomes a reality will be result of a dream rather then scientists arguing over polemics. Having said that I would now relate briefly how the dream of electric lighting became a reality and contrary to the claim of being branded unscientific, how it was endorsed by the scientific community and lauded by the public.
It was as early as 1874 that my electric device was appreciated by Mr. George Barker at Franklin Institute. In the year 1878 it was none other then Mr. George Barker an eminent scientist, Professor of Physics at University of Pennsylvania, Associate Editor of American Journal of Science, member of NAS and later the President of AAAS, with whom I discussed the idea of electric lighting, on a trip to Wyoming to observe a solar eclipse, like other scientists. As it is common knowledge that Mr. Barker has impeccable credentials as a scientist, he appreciated my idea and arranged my visit to see the arc light bulb built by Messer Moses Farmer and William Wallace in Connecticut. Mr. Barker showed his sagacity while praising my work in the Washington meeting of NAS held in April 1878. In that meeting I demonstrated phonograph which was appreciated greatly by the audience as a great product of science. The same year I was invited to join AAAS and I joined. The prestigious organization therefore recognized the scientific merit of my work. I would also like to further strengthen my scientific credentials in the eyes of those who take a negative view of my work, by stating that Mr. Upton a 'trained' scientist by the standards so jealously being guarded, is a close associate and assists my work. The very fact that he, a man of science is working with me demonstrates that what I do is nothing but Science.
It has also been alleged that I do not adhere to the accepted norms of scientific scholarship. The particular allegation that I have in mind is the reference made to my reporting the scientific findings that I make, to the newspapers, which the public reads. My assertion is that; ...Download file to see next pagesRead More
Share:
Tags
Cite this document
(“Applied Science Personal Statement Example | Topics and Well Written Essays - 750 words”, n.d.)
Retrieved from https://studentshare.org/miscellaneous/1507774-applied-science

CHECK THESE SAMPLES OF Applied Science

Medical knowledge consists of three issues. Knowledge gained at the medical college, knowledge gained in the practical field in real-life situations in dealing with the patients and above all the self-confidence of the doctor to put into practice his latent skill. A confident doctor does not hesitate to tell the truth. Atul Gawande (2003) writes “There are surgeons who will see faults everywhere except in themselves. They have no questions and no fears about their abilities. As a result, they learn nothing from their mistakes and know nothing of their limitations.” (p.61)Such a doctor lacks loyalty to the professional ethical principles. A lie told has to be remembered all the times, but truth has no such problems. Gaw...
7 Pages(1750 words)Book Report/Review
sponsored ads
Save Your Time for More Important Things
Let us write or edit the personal statement on your topic "Applied Science" with a personal 20% discount.
GRAB THE BEST PAPER

Let us find you another Personal Statement on topic Applied Science for FREE!