Comments (0)
Add to wishlistDelete from wishlist
Cite this document
Summary
One of the most widely held notions of self-deception is that of Donald Davidson which makes the effort to elucidate the paradox through the view that there are simultaneous divisions within the mind itself …
Download full paperFile format: .doc, available for editing
HIDE THIS PAPERGRAB THE BEST PAPER95.3% of users find it useful 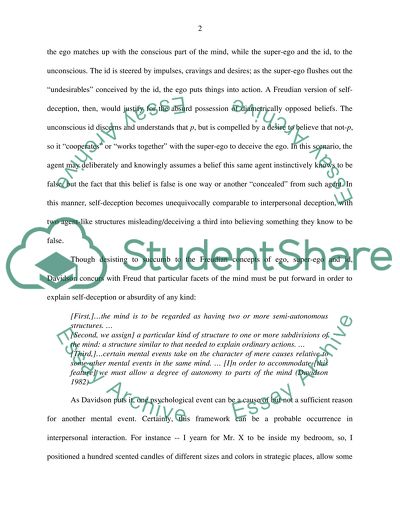 Download file to see previous pages Such event, according to the theory, will "permit" the idea that an individual may at any given time cling to incongruous viewpoints and ambiguous judgments about her/him or about a given state of affairs. The concept, Davidson contends, is that if parts of the mind are, to some degree or level, independent, we can comprehend how they are able to entertain and embrace inconsistencies, contradictions and variations, and to intermingle and cooperate on a causal level. This, I beg to disagree. If we take a cursory glimpse, Davidson's account offers a fascinating depiction of self-deception. It seemed to naturally and readily settle the absurdity and the irony of the concept. Nonetheless, if we investigate seriously the sketch of this phenomenon on the "divided-mind" paradigm, grave doubts and opposing protestations will come to our mind.However, before explicitly elucidating my disagreement, let me first discuss another angle that runs parallel to Davidson's idea of the divided-mind occurrence - Freud's embodiment of the human mind consisting of an ego, super-ego, and id. To the Freudian picture, the ego matches up with the conscious part of the mind, while the super-ego and the id, to the unconscious. The id is steered by impulses, cravings and desires; as the super-ego flushes out the "undesirables" conceived by the id, the ego puts things into action. A Freudian version of self-deception, then, would justify for the absurd possession of diametrically opposed beliefs. The unconscious id discerns and understands that p, but is compelled by a desire to believe that not-p, so it "cooperates" or "works together" with the super-ego to deceive the ego. In this scenario, the agent may deliberately and knowingly assumes a belief this same agent instinctively knows to be false, but the fact that this belief is false is one way or another "concealed" from such agent. In this manner, self-deception becomes unequivocally comparable to interpersonal deception, with two agent-like structures misleading/deceiving a third into believing something they know to be false.
Though desisting to succumb to the Freudian concepts of ego, super-ego and id, Davidson concurs with Freud that particular facets of the mind must be put forward in order to explain self-deception or absurdity of any kind:
[First,]the mind is to be regarded as having two or more semi-autonomous structures.
[Second, we assign] a particular kind of structure to one or more subdivisions of the mind: a structure similar to that needed to explain ordinary actions.
[Third,]certain mental events take on the character of mere causes relative to some other mental events in the same mind. [I]n order to accommodate [this feature] we must allow a degree of autonomy to parts of the mind (Davidson 1982)
As Davidson puts it, one psychological event can be a cause of but not a sufficient reason for another mental event. Certainly, this framework can be a probable occurrence in interpersonal interaction. For instance -- I yearn for Mr. X to be inside my bedroom, so, I positioned a hundred scented candles of different sizes and colors in strategic places, allow some erotic music to reverberate inside the room and open the door a few inches apart just enough for Mr. X to have a wondrous peek of what's inside and what he can expect if he gets in. As he saw what's in store for him inside that room, he then craves to enter and will want to ...Download file to see next pagesRead More
Share:
Tags
Cite this document
(“A critical response to Donald Davidsons views of self-deception Essay”, n.d.)
A critical response to Donald Davidsons views of self-deception Essay. Retrieved from https://studentshare.org/miscellaneous/1507713-a-critical-response-to-donald-davidsons-views-of-self-deception

“A Critical Response to Donald Davidsons Views of Self-Deception Essay”, n.d. https://studentshare.org/miscellaneous/1507713-a-critical-response-to-donald-davidsons-views-of-self-deception.
Comments (0)
Click to create a comment or rate a document

...Please indicate Self Assessment: Conflict Management Style The assessment on conflict management that I took suggests that I am the type of person who tends to cooperate and work with people to achieve a desirable outcome. It suggests that when I am faced with a conflicting situation, although I listen and consider other viewpoints included in the discussion, I carefully evaluate and analyse every detail in accordance to my own. It depicts that I welcome other ideas or arguments but not easily swayed by them for I tend to make my point be heard and accepted as well, creating a really interesting discussion that in turn promotes a win-win situation. Furthermore, the assessment also indicated that second to collaborating attitude, I also...
7 Pages(1750 words)Essay
sponsored ads
Save Your Time for More Important Things
Let us write or edit the essay on your topic "A critical response to Donald Davidsons views of self-deception" with a personal 20% discount.
GRAB THE BEST PAPER

Let us find you another Essay on topic A critical response to Donald Davidsons views of self-deception for FREE!