Comments (0)
Add to wishlistDelete from wishlist
Cite this document
Summary
The struggle for power involves us in a daily battle f influencing, persuading, commanding or, when all else fails, forcing people to do what we want while, at the same time, preventing them from exerting their will over us. But power extends beyond this mosaic f interpersonal struggles…
Download full paperFile format: .doc, available for editing
HIDE THIS PAPERGRAB THE BEST PAPER97.4% of users find it useful 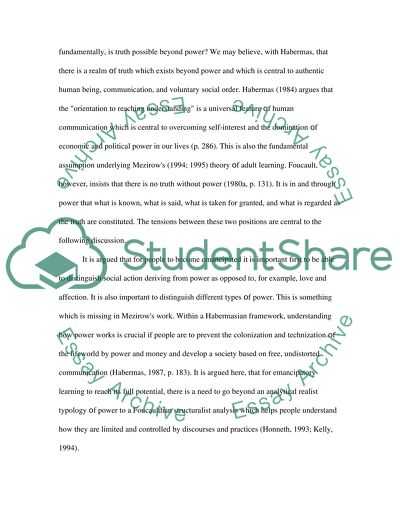 Download file to see previous pages "It is never localized here or there, never in anybody's hands, never appropriated as a commodity or piece f wealth" (1980a, p. 98).
Although discourse and practice pre-exist us, we learn to harness them to our own end. The notion f power being located within rules and regulations which are continually adopted and transformed by individual agents is central to Giddens' structuration theory f power (1984,p. 14). Foucault is known for his work analyzing changes in the discourse and practice f discipline and punishment, particularly in relation to education (1977a) but, with the exception f Dwyer's (1995) study f post-compulsory education in Australia, his theories have not had any major impact in adult education (Westwood, 1992).
To understand the notion f empowerment and emancipation, we must begin with an analysis f power. This leads immediately to a fundamental problem: If power dictates or produces truth, how do we recognize true statements about power More fundamentally, is truth possible beyond power We may believe, with Habermas, that there is a realm f truth which exists beyond power and which is central to authentic human being, communication, and voluntary social order. Habermas (1984) argues that the "orientation to reaching understanding" is a universal feature f human communication which is central to overcoming self-interest and the domination f economic and political power in our lives (p. 286). This is also the fundamental assumption underlying Mezirow's (1994; 1995) theory f adult learning. Foucault, however, insists that there is no truth without power (1980a, p. 131). It is in and through power that what is known, what is said, what is taken for granted, and what is regarded as the truth are constituted. The tensions between these two positions are central to the following discussion.
It is argued that for people to become emancipated it is important first to be able to distinguish social action deriving from power as opposed to, for example, love and affection. It is also important to distinguish different types f power. This is something which is missing in Mezirow's work. Within a Habermasian framework, understanding how power works is crucial if people are to prevent the colonization and technization f the lifeworld by power and money and develop a society based on free, undistorted communication (Habermas, 1987, p. 183). It is argued here, that for emancipatory learning to reach its full potential, there is a need to go beyond an analytical realist typology f power to a Foucauldian structuralist analysis which helps people understand how they are limited and controlled by discourses and practices (Honneth, 1993; Kelly, 1994).
The central tenet f this paper is that empowerment involves people developing capacities to act successfully within the existing system and structures f power, while emancipation concerns critically analyzing, resisting and challenging structures f power. The first section begins with an analysis f empowerment. Empowerment used to be associated with a wide variety f radical social movements (Bookman, 1988; Davis, 1988; Hanks, 1987; Inglis, 1994; Kieffer, 1984; O'Sullivan, 1993; Solomon, 1976; Villerreal, 1988). In more recent years, however, it has been appropriated by organizational ...Download file to see next pagesRead More
Share:
Tags
Cite this document
(“Sociology can be a potent tool for the emancipatory youth worker Essay”, n.d.)
Sociology can be a potent tool for the emancipatory youth worker Essay. Retrieved from https://studentshare.org/miscellaneous/1507576-sociology-can-be-a-potent-tool-for-the-emancipatory-youth-worker-discuss

“Sociology Can Be a Potent Tool for the Emancipatory Youth Worker Essay”, n.d. https://studentshare.org/miscellaneous/1507576-sociology-can-be-a-potent-tool-for-the-emancipatory-youth-worker-discuss.
Comments (0)
Click to create a comment or rate a document

Especially in these Modern times, being a leader is by no means an easy task. It calls for a lot of sacrifices and hard work because the youth of today are not the youth of a few centuries ago. Human beings are like institutions that undergo various changes throughout their lifespan. In the beginning, they are filled with vigor and vitality, but over a period of time, due to lack of proper guidance or laxity on the part of its leaders, monotony sets in and one loses their interest. Hence one of the vital...
6 Pages(1500 words)Thesis

A local area of Ofsted provides this organization with a perfect opportunity to inspect children and young people and contribute much to develop social networks. The concept of social capital is a key concept, which determines the Coalition Government’s aspirations for a Big Society development. It is relevant to distribute power "from the state to society; from the center to local communities, giving people the opportunity to take more control over their lives" (An investigation into the delivery of Integrated Youth Support Services (IYSS) in England: Headline findings from quantitative data collection, July 2010). Youth organization works in three main directions: participation in education, employment, and training. Young...
6 Pages(1500 words)Coursework
sponsored ads
Save Your Time for More Important Things
Let us write or edit the essay on your topic "Sociology can be a potent tool for the emancipatory youth worker discuss" with a personal 20% discount.
GRAB THE BEST PAPER

Let us find you another Essay on topic Sociology can be a potent tool for the emancipatory youth worker discuss for FREE!