Comments (0)
Add to wishlistDelete from wishlist
Cite this document
Summary
The Great Depression 2" This is how the current economic status of this country has been described (Captain Hook, 2008). How have we got to a point where people are saying that our country's economy is falling below and beyond even that of the 1930's depression The Banks in the United States and the UK in the past few years appeared to have adopted "High Risk Appetite" as the way of doing business as they perceived to have high competencies and track record of Risk Management to launch riskier products to achieve high returns…
Download full paperFile format: .doc, available for editing
HIDE THIS PAPERGRAB THE BEST PAPER94.1% of users find it useful 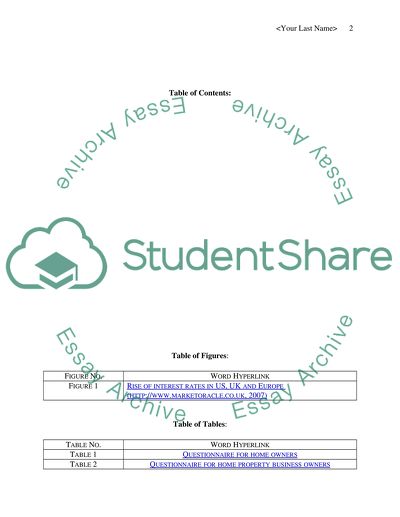 Download file to see previous pages They perceived to have transferred the risks by practising dependency on unregulated investors through mechanisms like Special Purpose Vehicles and Special Investment Vehicles (SPVs & SIVs). The current economic crisis thus occurred as the result of exposure to Market Risks due to such risk transfer mechanisms that caused many loopholes in the Credit & Liquidity Risk Management. The entire disaster happened in the lending to Sub-Prime customers in home mortgage markets, which are individuals or companies not having clean credit history or regular source of income. The banks lend loans to Sub-Prime customers to avail the benefits of higher interest rates and used the mechanism of "Securitization" to secure themselves that essentially is the mechanism of distributing the risk of the lending to the investors outside the Banking system through a process called "Conduiting". The process of "Securitization" gave confidence to banks in this risky business and hence resulted in the boom of Credit Derivative Market. The money was believed to be flowing through these "conduits" directly from "investors to the borrowers" through the SPV and SIV system. The risk assessors never imagined that the underlying collaterals (houses) will face a crash in prices to a global level that would be uncontrollable by even the governments. Even the external rating agencies couldn't predict the Sub-Prime crisis because the Securitization Process was extremely complex and the dependency of valuations was upon scattered and unreliable data inside as well as outside the core banking system. This system expanded uncontrollably and the market competitiveness increasing exponentially resulting in banks sanctioning loans bypassing essential procedures as if there was "no time for risk management". The actual risks got covered under hyped data and fair valuation became a matter of joke to be cracked. [Schmitz, Michael. C and Forray, Susan J. pp28-30; Clerc, Laurent. 2008. pp1-7]
Objective of the Research
The following are the main objectives of my research:
1. Find out what the cause/s of the current financial crisis is/are;
2. Find out what effect the crisis is having on the United Kingdom, for example in terms of monetary power, and;
3. How individuals and businesses are affected;
4. Conclude what is being done, and what can be done about our current ...Download file to see next pagesRead More
Share:
Tags
Cite this document
(“Financial Crisis The Great Depression Coursework”, n.d.)
Retrieved from https://studentshare.org/miscellaneous/1507426-financial-crisis-the-great-depression

CHECK THESE SAMPLES OF Financial Crisis The Great Depression

In the story, one symbolism used to represent the sensitivity and weakness of women is the chrysanthemums themselves. The chrysanthemums are described as having stems that are too small and easy for Elisa’s energy, and this is basically the same as her character. As a weak and sensitive woman, she easily becomes prey to the kindness displayed by the stranger. Just like the chrysanthemums that need to be constantly transplanted and regularly cut, women like Elisa easily believe what men tell them although this is not necessarily true. Moreover, the chrysanthemums are somehow ridiculed by Harvey when he tells Elisa, “Some of those yellow chrysanthemums you had this year were ten inches across…I wish you’d wo...
7 Pages(1750 words)Literature review
sponsored ads
Save Your Time for More Important Things
Let us write or edit the coursework on your topic "Financial Crisis The Great Depression" with a personal 20% discount.
GRAB THE BEST PAPER

Let us find you another Coursework on topic Financial Crisis The Great Depression for FREE!