Comments (0)
Add to wishlistDelete from wishlist
Cite this document
Summary
Ella Cara Deloria, during her lifetime, was a combination of several traits in one person. She was an educator, anthropologist, ethnographer, linguist, and novelist of the Yankton Sioux background. Her perspectives, expressed through her work, brought her to limelight, though most of her these were not fully comprehended during her lifetime…
Download full paperFile format: .doc, available for editing
HIDE THIS PAPERGRAB THE BEST PAPER96.1% of users find it useful 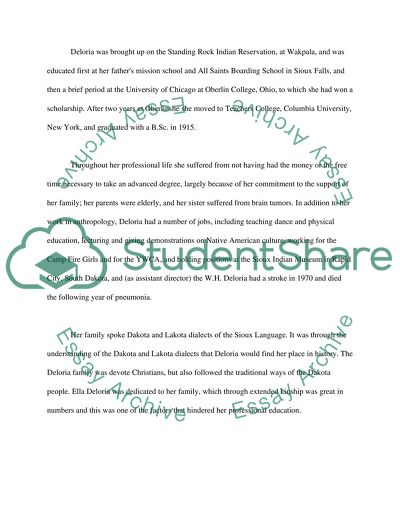 Download file to see previous pages Ella Cara Deloria is best known for her linguistic and ethnographic work on the Sioux Nation. Though not formally trained as anthropologist, since she was a trained as a teacher, she gained a reputation in the field. She brought a new perspective on her work, as she was born on the Yankton Sioux Reservation and part of a traditional Dakota Sioux family.
Deloria was born in the White Swan district of the Yankton Indian Reservation, South Dakota. Her parents were Mary Sully Bordeau Deloria and Philip Deloria, the family having Yankton Sioux, Irish, and French roots. Her father was one of the first Sioux to be ordained as an Episcopalian priest. Although Ella was the first child to the couple, they each had two daughters by previous marriages; her parent had three more children after her.
Deloria was brought up on the Standing Rock Indian Reservation, at Wakpala, and was educated first at her father's mission school and All Saints Boarding School in Sioux Falls, and then a brief period at the University of Chicago at Oberlin College, Ohio, to which she had won a scholarship. After two years at Oberlinshe she moved to Teachers College, Columbia University, New York, and graduated with a B.Sc. in 1915.
Throughout her professional life she suffered from not having had the money or the free time necessary to take an advanced degree, largely because of her commitment to the support of her family; her parents were elderly, and her sister suffered from brain tumors. In addition to her work in anthropology, Deloria had a number of jobs, including teaching dance and physical education, lecturing and giving demonstrations on Native American culture, working for the Camp Fire Girls and for the YWCA, and holding positions at the Sioux Indian Museum in Rapid City, South Dakota, and (as assistant director) the W.H. Deloria had a stroke in 1970 and died the following year of pneumonia.
Her family spoke Dakota and Lakota dialects of the Sioux Language. It was through the understanding of the Dakota and Lakota dialects that Deloria would find her place in history. The Deloria family was devote Christians, but also followed the traditional ways of the Dakota people. Ella Deloria was dedicated to her family, which through extended kinship was great in numbers and this was one of the factors that hindered her professional education.
Waterlilly was perhaps the highest of Deloria's achievement; it can be described as a book that guides the outsider into the mental as well as the historical world of the nineteenth century Sioux. Deloria was more focused on kinship, tribal structure, and the role of women in her traditional society and this greatly shaped her work. From a feminist perspective, Deloria's work appears to demonstrate the strength of the women in a traditional structure that is greatly misunderstood.
In her efforts to research traditional culture and structure, Deloria conducted vast number of interviews with elders, women and tribal historians. She spent 1962-1966 working at the University of South Dakota, where she did her research, lectured, consulted and continued writing that she became an authority on the Dakota and Lakota Sioux. These, to a large extent, defined the content and perspective of her novel - Waterlilly. Through her extensive research work, ...Download file to see next pagesRead More
Share:
Tags
Cite this document
(“Review of Ella Delorias Waterlily Feminist Perspective Essay”, n.d.)
Review of Ella Delorias Waterlily Feminist Perspective Essay. Retrieved from https://studentshare.org/miscellaneous/1507417-review-of-ella-delorias-waterlily-feminist-perspective

Validity of Electronic Contracts from an Islamic Perspective

... in different countries. This study is mainly restricted to the formation and application of electronic contract laws in the developed world i.e. the United States as well as the European Union. For a better review of the diverse policies adopted by countries world-wide the electronic contract laws adopted and implemented by other countries around the world would have provided a better perspective on the issue. 5. Conclusion Electronic contract have the ability to significantly transform the pace, scope and extent of business transactions since it affords the parties to the contract the ability to cater to the markets beyond their physical geographical boundaries. As the growth and development in the field of Information Technology...
38 Pages(9500 words)Research Paper

The Romanticized Perspective of the Bonnie and Clyde Story

Bonnie and Clyde, pictured below personified the hard-edged image that Bonnie and Clyde earned for their 1930s crime spree. It is an assortment of posed photographs that set the stage for the mythology that rose up involving the life, times, and crimes of the famous and infamous Bonnie and Clyde. Clyde, a violent, gun-toting ex-con with a long criminal past, which frivolously killed without remorse along the way and Bonnie who was his loyal and active accomplice, who also, flippantly fired guns, committed
crimes, they detail that the two were just about America’s most memorable villains (Federal Bureau of Investigation). She perceived as being a hard, harsh, and criminally violent woman. These two had become one the &ld...
6 Pages(1500 words)Case Study

The Feminist View on the Ideology of Separate Sphere

In this thesis, I intend to delve into a detailed perspective with regards to intricacies of public and private life contexts of a woman’s life as illustrated throughout the popular literature “Little Women” and influence of these separate spheres on each other in contrast to the popular notion that these are completely independent entities with no direct influence on each other.
The thesis of this research, therefore, is the societal depiction of a woman as secure, confident and trusted in handling private, family and home-related matters. On the flip side, it offers a stark contrast when it comes to the perception of her ability to handle public responsibilities.
In analyzing the feminist view on the...
11 Pages(2750 words)Case Study
sponsored ads
Save Your Time for More Important Things
Let us write or edit the essay on your topic "Review of Ella Delorias Waterlily Feminist Perspective" with a personal 20% discount.
GRAB THE BEST PAPER

Let us find you another Essay on topic Review of Ella Delorias Waterlily Feminist Perspective for FREE!