Comments (0)
Add to wishlistDelete from wishlist
Cite this document
Summary
Cutting behaviour is self-mutilating, and this is a type of self-harm behaviour. This is known to occur among a subgroup of individuals with eating disorders. From a clinical perspective, SHB among those with eating disorders has been associated with early histories of abuse, dissociation, multi-impulsivity, personality disorder, and borderline personality disorders (Sansone & Levitt, 2002)…
Download full paperFile format: .doc, available for editing
HIDE THIS PAPERGRAB THE BEST PAPER93.2% of users find it useful 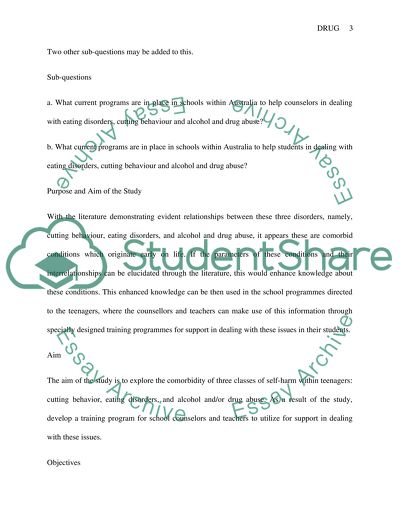 Extract of sample "Drug and Alcohol Abuse in Teenagers"

Download file to see previous pages Some researchers have maintained that in the society, the percentage of cutters and percentage of individuals with eating disorders are similar. Compared with non-mutilators, self-mutilating teenagers were significantly more likely to have an eating disorder, and about 61% of the self-injurers may report current or past eating disorders. In a study of 2525 Australian teenagers Patton et al. (1997) found psychiatric comorbidity to be the clearest factor associated with extreme dieting with 62% of extreme dieters reporting high levels of both anxiety and depression.
With the literature demonstrating evident relationships between these three disorders, namely, cutting behaviour, eating disorders, and alcohol and drug abuse, it appears these are comorbid conditions which originate early on life. If the parameters of these conditions and their interrelationships can be elucidated through the literature, this would enhance knowledge about these conditions. This enhanced knowledge can be then used in the school programmes directed to the teenagers, where the counsellors and teachers can make use of this information through specially designed training programmes for support in dealing with these issues in their students.
Aim
The aim of the study is to explore the comorbidity of three classes of self-harm within teenagers: cutting behavior, eating disorders, and alcohol and/or drug abuse. As a result of the study, develop a training program for school counselors and teachers to utilize for support in dealing with these issues.
Objectives
Identify the relationship between cutting behaviour, eating disorders and alcohol/drug abuse.
Increase awareness and understanding between the relationship between cutting behaviour, eating disorders and alcohol/drug abuse.
Develop an innovative training program with the aim of improving client outcomes.
Evaluate the effectiveness of school counselors as a method of support to those who self harm and have eating disorders.
Review of Literature
Strategy
Methodology is important to fill in the intellectual vacuum that may be associated with a research question, and therefore, there is a need to pinpoint the context of a research within the existing knowledge base. Since there is a considerable body of existing literature depicting the studies in several areas of science and practice, while performing a literature review, it is pertinent and important to perform the review in a systematic ...Download file to see next pagesRead More
Share:
Tags
Cite this document
(“Drug and Alcohol Abuse in Teenagers Research Paper”, n.d.)
Drug and Alcohol Abuse in Teenagers Research Paper. Retrieved from https://studentshare.org/miscellaneous/1507407-drug-and-alcohol-abuse-in-teenagers

“Drug and Alcohol Abuse in Teenagers Research Paper”, n.d. https://studentshare.org/miscellaneous/1507407-drug-and-alcohol-abuse-in-teenagers.
Comments (0)
Click to create a comment or rate a document

CHECK THESE SAMPLES OF Drug and Alcohol Abuse in Teenagers

The above equation is a natural exponential equatio...

...Counseling and Methadone in Treatment of Substance Abuse 2008 Counseling and Methadone in Treatment of Substance Abuse Introduction Substance abuseis currently one of the most challenging and disturbing health issues in the US. Almost 100 thousand of US citizens die annually as a result of illicit drug and alcohol abuse, and approximately 12 thousand more die of AIDS, which is strongly related to substance abuse. An estimated 14 million people in the US either have been diagnosed with or currently continue to abuse alcohol, drugs and other illicit substances (Austin, 2005). The almost epidemic situation with substance abuse and dependency has negative health consequences and impressive economic costs. Substance abuse, including tobacco...
10 Pages(2500 words)Term Paper

The statistics also indicate that the total number of deaths was 12,941 with the white population encompassing 11,595 and the black 1 162. These statistics show that the rate of birth is higher than the rate of deaths i.e. 10.4% to 9.7%.
The county government enhances the health of the residents, including the youth through collaborating with the health care providers and other organizations involved in catering for the welfare of the community. According to CityData.com (2012), some of the health care services provided by hospitals to the county residents include Acute Care, Proprietary, emergency service, and veterans administration. The social welfare is enhanced by non-governmental organizations, especially those involved...
6 Pages(1500 words)Coursework
sponsored ads
Save Your Time for More Important Things
Let us write or edit the research paper on your topic "Drug and Alcohol Abuse in Teenagers" with a personal 20% discount.
GRAB THE BEST PAPER

Let us find you another Research Paper on topic Drug and Alcohol Abuse in Teenagers for FREE!