Comments (0)
Add to wishlistDelete from wishlist
Cite this document
Summary
As a science, social epidemiology follows different research methods and employs different techniques which meet its scientific needs and research requirements. Observational and experimental methods have different purposes and allow researches to investigate different sides of a problem or a research issue…
Download full paperFile format: .doc, available for editing
HIDE THIS PAPERGRAB THE BEST PAPER93.8% of users find it useful 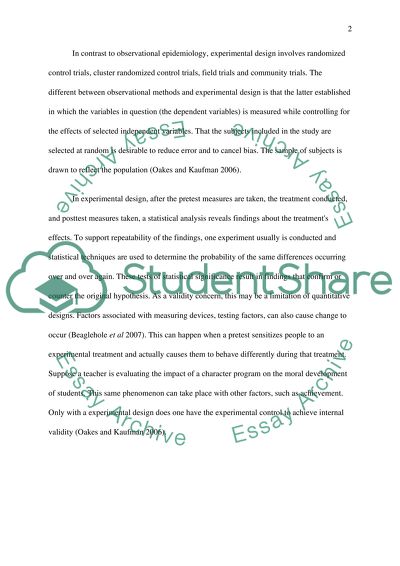 Research Methods for Social Epidemiology As a science, social epidemiology follows different research methods and employs different techniques whichmeet its scientific needs and research requirements. Observational and experimental methods have different purposes and allow researches to investigate different sides of a problem or a research issue. In epidemiology, observation is the most frequent data-collection method used in qualitative research. Face validity is a low-level estimate of validity, appropriate only as a last resort or when no other validity estimates can be obtained, for three reasons (Beaglehole et al 2007). Observational research involves descriptive and analytical studies. First, participant observation (in which the observer is obvious to and involved with the subjects) is less valid than a questionnaire would be for sensitive data. Second, the observer's expectations affect what he or she sees and reports, reducing the validity of the data. Validity is thus diminished when the observer reports seeing either "everything" or "nothing." In its turn, observational epidemiology involves the following types of research: descriptive studies, ecological studies fallacy, cross sectional studies and cohort studies (Oakes and Kaufman 2006).
In participant observation, the researcher is a regular participant in the activities being observed; while in non-participant observations, the researcher is not a participant in the ongoing activities being observed. Second, structuring the observation increases validity by focusing the attention of the observers on certain characteristics and events. Third, placing the observation on a scientific foundation by stating a hypothesis up front increases validity by avoiding distortion. Using observation only for studying those epidemiological phenomena that are appropriate to this method (e.g., nonverbal behaviors and social interactions) increases validity (Beaglehole et al 2007).
In contrast to observational epidemiology, experimental design involves randomized control trials, cluster randomized control trials, field trials and community trials. The different between observational methods and experimental design is that the latter established in which the variables in question (the dependent variables) is measured while controlling for the effects of selected independent variables. That the subjects included in the study are selected at random is desirable to reduce error and to cancel bias. The sample of subjects is drawn to reflect the population (Oakes and Kaufman 2006).
In experimental design, after the pretest measures are taken, the treatment conducted, and posttest measures taken, a statistical analysis reveals findings about the treatment's effects. To support repeatability of the findings, one experiment usually is conducted and statistical techniques are used to determine the probability of the same differences occurring over and over again. These tests of statistical significance result in findings that confirm or counter the original hypothesis. As a validity concern, this may be a limitation of quantitative designs. Factors associated with measuring devices, testing factors, can also cause change to occur (Beaglehole et al 2007). This can happen when a pretest sensitizes people to an experimental treatment and actually causes them to behave differently during that treatment. Suppose a teacher is evaluating the impact of a character program on the moral development of students. This same phenomenon can take place with other factors, such as achievement. Only with a experimental design does one have the experimental control to achieve internal validity (Oakes and Kaufman 2006).
Bibliography
Beaglehole, R. Bonita, R. Kjellstrom T. 2007, Basic Epidemiology. WHO; 2nd ed edition.
Oakes, J. M., Kaufman, J. S. 2006, Methods in Social Epidemiology: Research Design and
Methods (Public Health/Epidemiology and Biostatistics). Jossey Bass; 1 edition. Read More
Share:
Tags
Cite this document
(“Research Methods for Social Epidemiology Essay Example | Topics and Well Written Essays - 500 words”, n.d.)
Research Methods for Social Epidemiology Essay Example | Topics and Well Written Essays - 500 words. Retrieved from https://studentshare.org/miscellaneous/1507118-research-methods-for-social-epidemiology

CHECK THESE SAMPLES OF Research Methods for Social Epidemiology

The efficient market hypothesis states that securities are typically in equilibrium and that they are fairly priced in th...
8 Pages(2000 words)Article
sponsored ads
Save Your Time for More Important Things
Let us write or edit the essay on your topic "Research Methods for Social Epidemiology" with a personal 20% discount.
GRAB THE BEST PAPER

Let us find you another Essay on topic Research Methods for Social Epidemiology for FREE!