Comments (0)
Add to wishlistDelete from wishlist
Cite this document
Summary
This chapter will be divided into 3 parts. The first part will focus on the final forecast parameters. Then it will be followed by a presentation of the company's pro forma financial statements(McQuaig, 1997). This chapter will followed by a presentation on the financial ratios of the company.
…
Download full paperFile format: .doc, available for editing
HIDE THIS PAPERGRAB THE BEST PAPER97.9% of users find it useful 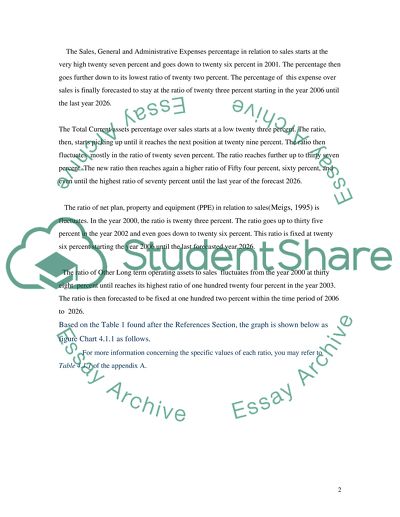 Download file to see previous pages We have put together 5 financial parameters(Matz, 1980) in Chart 4.1.1. The 5 parameters are Cost of Good Sold as a percentage of Sales ("CGS%S"); Selling, General, and Administrative Expenses as a percentage of Sales ("SGA%S"); Operating Current Asset as a percentage of Sales ("OCA%S"); Property, Plant, and Equipment as a percentage of Sales ("PP&E%S"); and Other Intangible Assets as a percentage of Sales ("OIA%S").
The percentage of Cost of Goods Sold in relation to the total Sales is ranges from the start in the year 2000 at forty eight percent and fluctuates every year until it reaches its highest percentage of fifty seven percent in the year 2005. The cost of goods sold percentage in relation to Sales then is fixed at fifty six percent starting the following year, 2006, until the last year 2026.
The Sales, General and Administrative Expenses percentage in relation to sales starts at the very high twenty seven percent and goes down to twenty six percent in 2001. The percentage then goes further down to its lowest ratio of twenty two percent. The percentage of this expense over sales is finally forecasted to stay at the ratio of twenty three percent starting in the year 2006 until the last year 2026.
The Total Current assets percentage over sales starts at a low twenty three percent. The ratio, then, starts picking up until it reaches the next position at twenty nine percent. The ratio then fluctuates mostly in the ratio of twenty seven percent. The ratio reaches further up to thirty seven percent. The new ratio then reaches again a higher ratio of Fifty four percent, sixty percent, and even until the highest ratio of seventy percent until the last year of the forecast 2026.
The ratio of net plan, property and equipment (PPE) in relation to sales(Meigs, 1995) is fluctuates. In the year 2000, the ratio is twenty three percent. The ratio goes up to thirty five percent in the year 2002 and even goes down to twenty six percent. This ratio is fixed at twenty six percent starting the year 2006 until the last forecasted year 2026.
The ratio of Other Long term operating assets to sales fluctuates from the year 2000 at thirty eight percent until reaches its highest ratio of one hundred twenty four percent in the year 2003. The ratio is then forecasted to be fixed at one hundred two percent within the time period of 2006 to 2026.
Based on the Table 1 found after the References Section, the graph is shown below as figure Chart 4.1.1 as follows.
For more information concerning the specific values of each ratio, you may refer to Table 4.1.1 of the appendix A.
Chart 4.1.1 Trend of 5 financial ratios from 2000 to 2026
To conclude this section, we would like to discuss the Dividend Payout Ratio ("DPOR"). From the chart, we may observe that the company had high DPORs in late 2000 till 2005. Indeed, the Company is among the top food and beverage companies in the United States and around the world both in giving out Dividend to its shareholders(Meigs, 1992) and filling the demands of its discriminating clients. Dividend Pay ...Download file to see next pagesRead More
Share:
Tags
Cite this document
(“Financial Statement forecast for General Mills Essay”, n.d.)
Retrieved from https://studentshare.org/miscellaneous/1507032-financial-statement-forecast-for-general-mills

CHECK THESE SAMPLES OF Financial Statement forecast for General Mills

The first paper is about International Banking Regulation. For banks that may want to spread across borders, the study gives an explanation of how the various policies and laws may affect its operations. The second paper in the study gives the various restrictions on the development of Pan-European bank mergers. It shows how regional liquidity shocks limit cross-border bank mergers. Thirdly, the study shows the various methods banks use in risk assessment when lending to less developed countries’ sovereign governments. It gives a topology that can help banks efficiently assess risks. An explanation of the multi-nationalization that is given in this paper comes with a model showing how applicable the profit maximization hypot...
8 Pages(2000 words)Literature review
sponsored ads
Save Your Time for More Important Things
Let us write or edit the essay on your topic "Financial Statement forecast for General Mills" with a personal 20% discount.
GRAB THE BEST PAPER

Let us find you another Essay on topic Financial Statement forecast for General Mills for FREE!