Comments (0)
Add to wishlistDelete from wishlist
Cite this document
Summary
This paper argues that religion and slavery are in conflict based on Frederick Douglass’ Narrative of the Life of Frederick Douglass, An American Slave…
Download full paperFile format: .doc, available for editing
HIDE THIS PAPERGRAB THE BEST PAPER97% of users find it useful 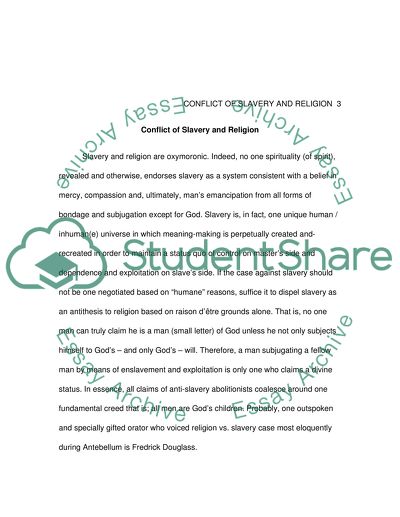 Extract of sample "Conflict of Slavery and Religion"

CONFLICT OF SLAVERY AND RELIGION Conflict of Slavery and Religion [Insert Your First and s] [Insert of CONFLICT OF SLAVERY AND RELIGION 2
Abstract
This paper argues that religion and slavery are in conflict based on Frederick Douglass' Narrative of the Life of Frederick Douglass, An American Slave.
CONFLICT OF SLAVERY AND RELIGION 3
Conflict of Slavery and Religion
Slavery and religion are oxymoronic. Indeed, no one spirituality (of spirit), revealed and otherwise, endorses slavery as a system consistent with a belief in mercy, compassion and, ultimately, man's emancipation from all forms of bondage and subjugation except for God. Slavery is, in fact, one unique human / inhuman(e) universe in which meaning-making is perpetually created and-recreated in order to maintain a status quo of control on master's side and dependence and exploitation on slave's side. If the case against slavery should not be one negotiated based on "humane" reasons, suffice it to dispel slavery as an antithesis to religion based on raison d'tre grounds alone. That is, no one man can truly claim he is a man (small letter) of God unless he not only subjects himself to God's - and only God's - will. Therefore, a man subjugating a fellow man by means of enslavement and exploitation is only one who claims a divine status. In essence, all claims of anti-slavery abolitionists coalesce around one fundamental creed that is; all men are God's children. Probably, one outspoken and specially gifted orator who voiced religion vs. slavery case most eloquently during Antebellum is Fredrick Douglass.
In his Narrative of the Life of Frederick Douglass, An American Slave, Douglass employs a set of rhetorical as well as narrative strategies by which he not only dispels slavery as an antithesis to religion but also reclaims slavery discourse as an African American meaning-making universe par excellence.
CONFLICT OF SLAVERY AND RELIGION 4
Indeed, Douglass' Narrative is a bible unto itself against slavery and for man's ultimate liberation as realized by an attachment to God's own words - as opposed to slaveholders' - worthy of an African American made free.
Of particular interest is Douglass' relationship with his former master, Captain Auld, whom he qualifies as "cruel". In a context speaking to an ex-slave who finds refuge and solace in religion as a meaning maker and a vehicle for salvation and ultimate liberation, Douglass appears detached from himself as he reflects on his master's Slaveholding Christianity as opposed to Christianity of Christ:
Prior to his conversion, he relied upon his own depravity to shield and sustain him in his savage barbarity; but after his conversion, he found religious sanction and support for his slaveholding cruelty. He made the greatest pretensions to piety. (Douglass, 1845, Chap. IX, para. 2)
Thus, Christianity is made Masters' (in capitals) religion, a Slaveholder's religion from which lesser beings are excluded and hence a justified cruelty.
In fact, "cruel" echoes deep in all Douglass' narrative(s). Unsurprisingly, Douglass' emphatic defense of (Christ's) religion as a belief in values of mercy and compassion ushers in his whole set of arguments against slavery as an antithesis to religion. For example, in his speech at Finsbury Chapel, Moorfields, London, Douglass is no clearer about his conception of religion and slavery as he
CONFLICT OF SLAVERY AND RELIGION 5
sets about to dismantle slavery as experienced by him and fellow brethren and to reconstruct religion, slaveholder's religion, as practiced in his home country in his audience's minds lashing at underlying hypocrisies all along. Most notably,
I need not do more than state the general fact, that slavery has existed under the droppings of the sanctuary of the south, for the last 200 years, and there has not been any war between the religion and the slavery of the south. (Douglass, 1846, para. 33)

CHECK THESE SAMPLES OF Conflict of Slavery and Religion

Therefore borders can be termed as anything the separates between two geographical entities which may be defined by a political entity or...

The social implications of polygamy are more intricate and complex as there are obvious variations in the literature regarding the nature of relationships among co-wives in a polygamous marriage. It is also difficult to differentiate whether it is entirely good or is it entirely bad for women. The Mormons are an exceptional case...

The foundation of the Jewish State is the...

The bakery organization failed to resolve the matter but eventually secured the services of a third party that helped separate one of the parties from the factory. As it has been pointed, the intimate relationship at the workplace was doing the company no harm until the unification came under strain (The Breakup at the Bakery, N. d). Intimate relationships aside, professional associations between workers can similarly develop into conflicts. That highlights the actuality that the workplace is stalled with an array of conflicting challenges. For a group to succeed, it must satisfactorily control conflicts within it. As the bakery case points, the management must have failed in moving swiftly to contain the situation and this was af...
7 Pages(1750 words)Assignment

...Opinion paper The Declaration of Helsinki by the WHO clearly s that in clinical trials involving humans the wellbeing of the should be of prime importance than the interest of science or society. This has been stated because at times in order to achieve the objectives of a study the investigators might overlook the welfare of the trial subjects thus jeopardizing their health in the process. According to ethical rules while comparing two treatment options the control group of the study must receive the best known treatment available while the study subjects are given a potential newer treatment. Only when there is no effective treatment available a placebo-controlled group can be used for the study. There have been several trials... paper The...
7 Pages(1750 words)Essay
sponsored ads
Save Your Time for More Important Things
Let us write or edit the essay on your topic "Conflict of Slavery and Religion" with a personal 20% discount.
GRAB THE BEST PAPER

Let us find you another Essay on topic Conflict of Slavery and Religion for FREE!