The project chosen for the is the house construction - Assignment Example

Comments (0)
Add to wishlistDelete from wishlist
Cite this document
Summary
The project chosen for the assignment is the house construction. This project required the completion of following activities that needed the duration specified according to the nature of tasks involved in each of them.
Foundation: This is the primary work in the whole process…
Download full paperFile format: .doc, available for editing
HIDE THIS PAPERGRAB THE BEST PAPER97.3% of users find it useful 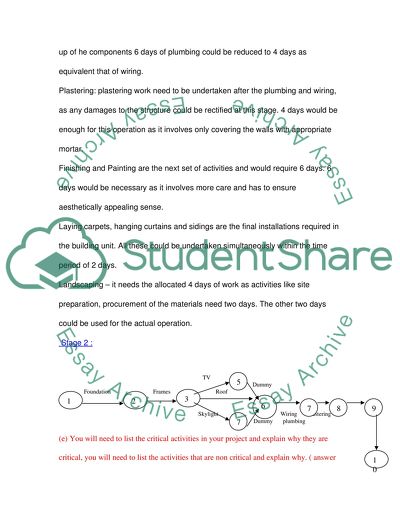 Download file to see previous pages The time required is only 8 days. The time allocated was 10, which would be on a higher estimation. The major activity is only the fixing the roof components to the wall frames and placing the skylights. The necessary designs for the skylights could be prepared and fabricated early. Placing this could be undertaken along with the roof work. And the attaching the TV antenna shall also be undertaken along with this.
Plumbing and wiring: The plumbing and wiring could be simultaneously undertaken and requires 4 days each for this activity. As the it involves only fixing up of he components 6 days of plumbing could be reduced to 4 days as equivalent that of wiring.
Plastering: plastering work need to be undertaken after the plumbing and wiring, as any damages to the structure could be rectified at this stage. 4 days would be enough for this operation as it involves only covering the walls with appropriate mortar.
Foundation:, Frames: 14 December 2008, Roof: 22 December 2008, Skylight: 25 December 2008, TV antenna - 28 December 2008, Plumbing and wiring: 30 December 2008; Plastering: 3 January 2009; Finishing: 7 January 2009, Painting: 7 January 2009; Carpets, curtains and sides: 13 January 2009 and landscape: 15 January 2009.
The critical activities that would effect the shorted time required to complete the project are foundation, frames, roof,...
The other two days could be used for the actual operation.
Stage 2 :
TV
Dummy
Foundation Frames Roof
Skylight Wiring Plastering
Dummy plumbing

“The Project Chosen for the Assignment Is the House Construction”, n.d. https://studentshare.org/miscellaneous/1506901-the-project-chosen-for-the-assignment-is-the-house-construction.
Comments (0)
Click to create a comment or rate a document

“Nathaniel’s passivity and indolence appeared especially unmanly in the presence of Robert Manning’s energetic capabilities, not only to the uncle but to the boy himself. The resulting self-distrust was to be permanently in conflict with Hawthorne’s innate pride” (Erlich, 1984). His family’s Puritan past would weigh heavily upon him throughout his life and would be strongly reflected within his writings. Although he was strongly encouraged to take up the family trade and become a merchant marine, Hawthorne had decided, by age 17, that he wanted to be a writer.

Hawthorne’s official education started at the Samuel H. Archer School as preparation for college at the age of 15 and th...

... not allocate the loss proportionally was the crux of the issue. (Blackler 2008). Hence, in Camford University project work, I wish to advise that it is wise to follow the decision made in the City Inn case and to grant time extension to the contractor. 2. Antiquities It is better to add clauses in JCT contract as regards to contractual provision concerning with the finding antiquity objects during the course of a contract work for varied reasons. One has to be careful in regard to antiquity object as disturbance or removal of such antiquity from their original site may deteriorate their value. For instance, during the construction of a very expensive and large project in London, Shakespeare’s Globe theatre was found and this had delayed...
13 Pages(3250 words)Essay
sponsored ads
Save Your Time for More Important Things
Let us write or edit the assignment on your topic "The project chosen for the assignment is the house construction" with a personal 20% discount.
GRAB THE BEST PAPER

Let us find you another Assignment on topic The project chosen for the assignment is the house construction for FREE!