Describe the concept of professionalism, responsibilty, and accountability of the nurse as a RESEARCHER - Research Proposal Example

Comments (0)
Add to wishlistDelete from wishlist
Cite this document
Summary
The role of a nurse as a researcher should instill latest standards of professional caring, sense of responsibilities and due accountability, both to the institution where (s)he works and also to the patient community,carers or surrogates of the patient.
The profession of nursing has undergone sea changes since the time of its pioneering advocate, Florence Nightingale and her indefatigable and selfless services provided to the wounded soldiers during the Crimean War in 1854…
Download full paperFile format: .doc, available for editing
HIDE THIS PAPERGRAB THE BEST PAPER93.7% of users find it useful 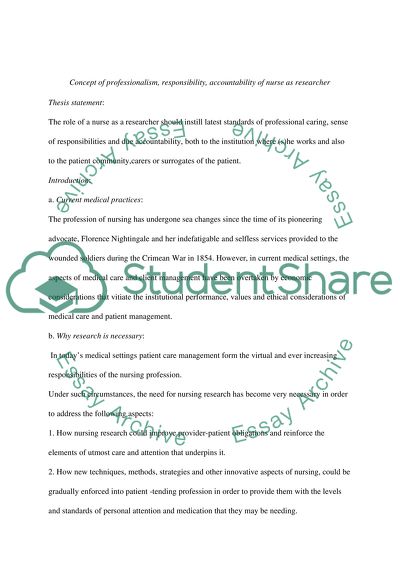 Extract of sample "Describe the concept of professionalism, responsibilty, and accountability of the nurse as a RESEARCHER"

Download file to see previous pages How new techniques, methods, strategies and other innovative aspects of nursing, could be gradually enforced into patient -tending profession in order to provide them with the levels and standards of personal attention and medication that they may be needing.
5. How research could enhance nursing efficiencies and contribute to a healthier, happier and harmonious social and community setting with enhanced benefits for all - the leaders, promoters, providers, patients and their careers and surrogates.
It is seen that the system which was developed in the 1970's as a teaching tool has now transformed into a major decision making and authoritative source for the practice of nursing. In the application of Neurman's Model, it is believed that there are mainly three stress causing aspects that may emanate from "intra personal, inter personal" or "extra personal" reactions to environmental stress. (Andrist, Nicholas & Wolf, 2006, p.245).
In the context of nursing research, it is believed that introduction of new techniques or processes of heath care or introduction of new medication or interventions may provoke such reactions among patients, especially the older ones. This would in turn test the professionalism, responsibility and accountability of health care providers.
However by use of Nueman's model there are benefits to be derived It propagates a system model propagated for optimum patient welfare and delivery of maximum beneficial health services. In the context of nursing research, this model believes that good health, sense of well being and integrated fitness are fundamental to the teaching of nursing student education.
Para.2. Translating nursing research into action:
Research entails pursuit of knowledge and understanding to be translated into action for the betterment of patients and careers. Research in the context of ...Download file to see next pagesRead More
Share:
Tags
Cite this document
(“Describe the concept of professionalism, responsibilty, and Research Proposal”, n.d.)
Describe the concept of professionalism, responsibilty, and Research Proposal. Retrieved from https://studentshare.org/miscellaneous/1506874-describe-the-concept-of-professionalism-responsibilty-and-accountability-of-the-nurse-as-a-researcher

“Describe the Concept of Professionalism, Responsibilty, and Research Proposal”, n.d. https://studentshare.org/miscellaneous/1506874-describe-the-concept-of-professionalism-responsibilty-and-accountability-of-the-nurse-as-a-researcher.
Comments (0)
Click to create a comment or rate a document

CHECK THESE SAMPLES OF Describe the concept of professionalism, responsibilty, and accountability of the nurse as a RESEARCHER

.... Measurements utilized are nominal, ordinal, interval, and ratio levels of measurement while the statistics used range from frequency distribution, percentage distribution, analysis of variance, chi-square and others. Nurse X humbly told the author that as a novice, she had to undergo a lot of trainings and professional developments in order to become an expert in the field of clinical research. Aside from the minimal qualifications of registered nurse preparations, basic life support certification, and recent acute care experiences, Nurse X underwent trainings related to the enhancement of core competencies in terms of research process, evidence-based nursing, Institutional Regulatory Board policies, interpersonal and communication skills...
1 Pages(250 words)Assignment

The aims of this paper are the following: to clarify the concept of the nurse practitioner as it is defined and understood in Au...
11 Pages(2750 words)Case Study

These verses express the importance of karma in guiding the Buddhists in th...
6 Pages(1500 words)Assignment
sponsored ads
Save Your Time for More Important Things
Let us write or edit the research proposal on your topic "Describe the concept of professionalism, responsibilty, and accountability of the nurse as a RESEARCHER" with a personal 20% discount.
GRAB THE BEST PAPER

Let us find you another Research Proposal on topic Describe the concept of professionalism, responsibilty, and accountability of the nurse as a RESEARCHER for FREE!