Comments (0)
Add to wishlistDelete from wishlist
Cite this document
Summary
The truck can be designed around the Panasonic MX-70 8-input SDI production switcher because of its powerful features and small form factor. It has a 8'x10' control room, space is a primary consideration. …
Download full paperFile format: .doc, available for editing
HIDE THIS PAPERGRAB THE BEST PAPER94.3% of users find it useful 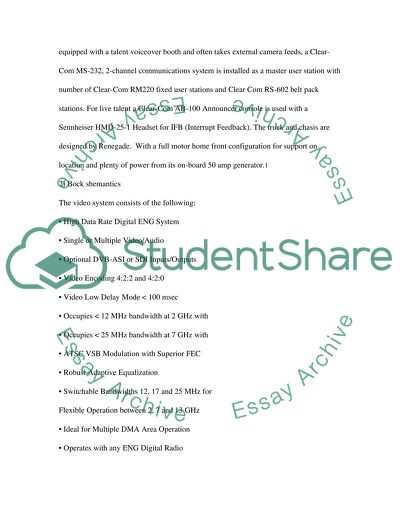 Download file to see previous pages The truck can be designed around the Panasonic MX-70 8-input SDI production switcher because of its powerful features and small form factor. It has a 8'x10' control room, space is a primary consideration. To accommodate monitoring all switcher inputs and on air elements Miranda Kaliedo Alto screen splitter feeding a Panasonic 50" Professional Series HD Plasma Display can be selected. Because of limited production schedules and some very expedited editorial needs, the system design includes an Apple X-Serve Raid, disk array supplying real time SDI video in and out of the switcher.At the front end of this Apple system, are three Final Cut Pro HD workstations for all the pre and post editorial, networked with Apple X-Serve and Xsan policing file management. This SAN configuration allows all the workstations to share files in real-time and drive SDI video to the switcher live and back to the X-Serve Raid. For b-rolls and live to tape two Panasonic AJ-SD93 DVCPRO 50 VTR's are selected.In addition, the truck is outfitted with a Sony J30-SDI so Amp'd can roll-in betacam formats as well. Because of the nature of the live events Amp'd shoots, a Doremi two-channel, SDI, MPEG 2, 4:2:2, 3-hour video server, was installed for instant playback and record with slow-mo. The audio of for Amp'd #1 starts from the embedded SDI external source, de-embedded and then is routed throughout the truck in analog pairs. A Mackie 1604-VLZ Pro, 16-channel analog mixer then handles the final mix. The Genelec 8020a's near field audio monitors handle program audio. Because this truck is also equipped with a talent voiceover booth and often takes external camera feeds, a Clear-Com MS-232, 2-channel communications system is installed as a master user station with number of Clear-Com RM220 fixed user stations and Clear Com RS-602 belt pack stations. For live talent a Clear-Com AB-100 Announcer console is used with a Sennheiser HMD-25-1 Headset for IFB (Interrupt Feedback). The truck and chasis are designed by Renegade. With a full motor home front configuration for support on location and plenty of power from its on-board 50 amp generator.1
2) Bock shemantics
The video system consists of the following:
- High Data Rate Digital ENG System
- Single or Multiple Video/Audio
- Optional DVB-ASI or SDI Inputs/Outputs
- Video Encoding 4:2:2 and 4:2:0
- Video Low Delay Mode < 100 msec
- Occupies < 12 MHz bandwidth at 2 GHz with
- Occupies < 25 MHz bandwidth at 7 GHz with
- ATSC VSB Modulation with Superior FEC
- Robust Adaptive Equalization
- Switchable Bandwidths 12, 17 and 25 MHz for
Flexible Operation between 2, 7 and 13 GHz
- Ideal for Multiple DMA Area Operation
- Operates with any ENG Digital Radio
- Small, Compact and Low Cost.
Advantages of the VSB Modem:
- High Data Rates over 12 MHz BW
- Data Rates to 80 Mbps
- Multiple Video Channels over a
Single ENG Microwave Link
- Ideal for Component HDTV
- Low Cost and Small Size
- Resilient to Multi-Path
Block Diagram of the Three Video ENG System
The audio system would consist of the following:
As technologies continue to advance, audio is no exception. Surround sound, audio effects, descriptive video, and multiple languages or maybe combinations of these are required, thereby increasing the number audio channels. In the analogue days, each audio signal required a balanced pair of wires and an XLR connector. This is no longer practical for multiple audio channels, and at least with AES/EBU digital audio, we can accommodate stereo on one coax cable. (Even in Europe, where engineers traditionally use balanced digital audio, most outside broadcast facilities are adopting coax cables for unbalanced AES audio).
Surround sound comes in different flavors, the most popular being 5.1. This means Left, Center, Right, Left Back, ...Download file to see next pagesRead More
Share:
Tags
Cite this document
(“Media Technology Essay Example | Topics and Well Written Essays - 1750 words”, n.d.)
Media Technology Essay Example | Topics and Well Written Essays - 1750 words. Retrieved from https://studentshare.org/miscellaneous/1506636-media-technology

CHECK THESE SAMPLES OF Media Technology

New and complex issues have arisen which demanded fresh understanding and handling of cases involved them. This has resulted in the enhanced development of specialized laws e.g. cyber laws and interpretation of those laws. The same is true with Media Laws. Media has developed much in the last half-century. As it evolved as a profession and more people started to join it, there arose the levels of money involved in it. With this grew the contractual obligations on the parts of parties and concerned laws e.g. patent laws, privacy laws, and copyrights laws, etc. also started to play their parts. With these issues, the role of law in the media industry also reached a new height.
Mathew Fisher, the appellant, joined a band with Mr...
6 Pages(1500 words)Assignment
sponsored ads
Save Your Time for More Important Things
Let us write or edit the essay on your topic "Media Technology" with a personal 20% discount.
GRAB THE BEST PAPER

Let us find you another Essay on topic Media Technology for FREE!