Comments (0)
Add to wishlistDelete from wishlist
Cite this document
Summary
On the balance sheet of a company in the assets section, we normally see representations of plants, machineries, and miscellaneous assets kept for running every day chores. We might come across Goodwill especially if the statements are consolidated. Creditors might specially want to focus on liquidity ratios of a company by analyzing their Receivables section and if the Inventory is drastically rising and whether there are being enough sales to reduce inventory levels…
Download full paperFile format: .doc, available for editing
HIDE THIS PAPERGRAB THE BEST PAPER93.9% of users find it useful 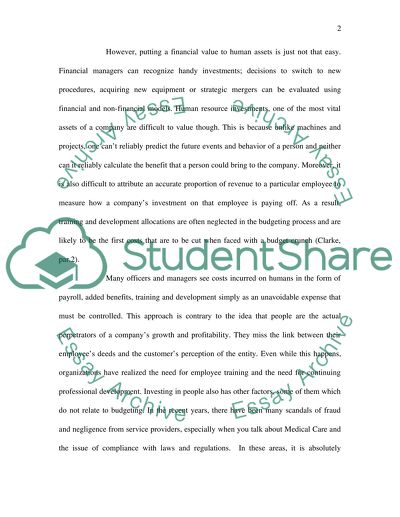 Download file to see previous pages Human capital is the stock of skills and knowledge possessed by individuals that eventually helps to perform labor, generating economic value ("Human Capital," par.1). Labor not only refers to the physical work done in the production phase (which is replaceable), but also encompasses all work done by an employee in course of his job for the entity. Ultimately, it is the ingenuity and hard work of the people that profits the business. Rating people as real investment is a very viable argument since they are using their skills to work for prosperity of the entity. It makes sense to invest more in training and development of the human assets in an organization, to conduct workshops and to offer them motivational incentives as in the long run, the money spent on them is expected to give a return easily in access of the incurred expense.
However, putting a financial value to human assets is just not that easy. Financial managers can recognize handy investments; decisions to switch to new procedures, acquiring new equipment or strategic mergers can be evaluated using financial and non-financial models. Human resource investments, one of the most vital assets of a company are difficult to value though. This is because unlike machines and projects, one can't reliably predict the future events and behavior of a person and neither can it reliably calculate the benefit that a person could bring to the company. Moreover, it is also difficult to attribute an accurate proportion of revenue to a particular employee to measure how a company's investment on that employee is paying off. As a result, training and development allocations are often neglected in the budgeting process and are likely to be the first costs that are to be cut when faced with a budget crunch (Clarke, par.2).
Many officers and managers see costs incurred on humans in the form of payroll, added benefits, training and development simply as an unavoidable expense that must be controlled. This approach is contrary to the idea that people are the actual perpetrators of a company's growth and profitability. They miss the link between their employee's deeds and the customer's perception of the entity. Even while this happens, organizations have realized the need for employee training and the need for continuing professional development. Investing in people also has other factors, some of them which do not relate to budgeting. In the recent years, there have been many scandals of fraud and negligence from service providers, especially when you talk about Medical Care and the issue of compliance with laws and regulations. In these areas, it is absolutely necessary to make sure the employees understand their responsibilities and know to whom they, and the organization as a whole is accountable. This is more important for organizations involved in HealthCare to view their staff as investments because heavy expenditure must be incurred to make sure the staff is compliant with standards and hygiene and competency standards as their actions would directly affect people that place reliance on the organization. Investment in this regard could save organizations millions of ...Download file to see next pagesRead More
Share:
Tags
Cite this document
(“Investment in human assets and the effect of the human behavior to the Essay”, n.d.)
Retrieved from https://studentshare.org/miscellaneous/1506633-investment-in-human-assets-and-the-effect-of-the-human-behavior-to-the-auditing-process

This work arrived at conclusions, by establishing the binding nature of the UDHR on the member states. The UDHR was rendered binding...
8 Pages(2000 words)Case Study
sponsored ads
Save Your Time for More Important Things
Let us write or edit the essay on your topic "Investment in human assets and the effect of the human behavior to the auditing process" with a personal 20% discount.
GRAB THE BEST PAPER

Let us find you another Essay on topic Investment in human assets and the effect of the human behavior to the auditing process for FREE!