Comments (0)
Add to wishlistDelete from wishlist
Cite this document
Summary
A contract consists in an actionable promise and promises. Every such promise involves two parties, a promiser and promise and an expression of a common intention and of expectations as to the act or forbearance promised (1).But question is, if there is a promise made by one party to do something, parallel to the main contract, to other party, then what will be the consequence of performance of that pre existing duty and how does the law consider the same…
Download full paperFile format: .doc, available for editing
HIDE THIS PAPERGRAB THE BEST PAPER91.1% of users find it useful 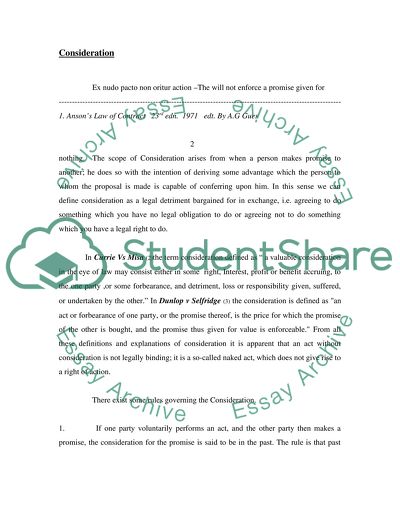 CHECK THESE SAMPLES OF Law of Contract, Case Law

...Contract Law Section A Question a) This issue where Igor advertised to sell his favourite guitar concerns the rules of offer and acceptance. An offerand acceptance is one of the essential elements of a valid contract. On the other hand, a contract may be defined as an agreement between two or more persons which is intended to create legally binding obligation. For this case, there was a contract that was made between Igor and Jonquil since there was an offer that was made through advertisement by Igor that was accepted by Jonquil through the post. 1 An offer may be made to a specific person or to any member of a group of Persons or to the world at large, but it cannot form the basis of a contract until it has been accepted by ascertained...
4 Pages(1000 words)Case Study

...Contract Law and Case Law Contract Law and Case Law The Effect of Williams V Roffey Bros & Nicholls (Contractors) Ltd [1989] EWCA Civ 5 on the English Contract law approach to Consideration Over the course of legal history, a large number of common law doctrines have been created to aid in the determination of whether a given contract is legally enforceable or if it was concluded in what can be perceived to be a valid manner. One of these doctrines is the requirement that contracts need to be supported by consideration. In contract law, a consideration is described as somethingof considerable value that has been given by the parties involved in a contract to aid in motivating them to agree to enter into the intended agreement...
8 Pages(2000 words)Coursework

The contract consists of an actionable promise and promises. Every such promise involves two parties, a promiser and promise and an expression of a common intention and of expectations as to the act or forbearance promised

It is what a party objectively demonstrates, not what a party may subjectively be thinking. Mutual assent is manifested in an offer, acceptance, and consideration. An offer is an indication by one party, offeror of a willingness to enter into a contract with another party, offered on some specific terms. A valid offer creates a power exclusively in the hands of the offeree such that all that is needed to form a contract is accepted. If one or more of the terms are missing from the offer, a court...

According to the present law of contract, claim for money is either for ‘payment of an agreed sum’, or for damages for breach of contract. In the 19th century, these two ideas made the common law to sanction full freedom and purity of...

..., but the contract Administrator CU Architects has vaguely talked about the fact that there could be circumstances for extensions of time for: After giving careful considerations about the points raised by you over the phone on various issues of the project, I wish to bring to your kind attention the following legal provisions under JCT contract provisions. 1. Inclement weather A contractor’s privilege to avail an extension of time due to concurrent delays can be found in (Henery Boot vs Malmaison 1. In this case, Mr. Justice Dyson in 1999 cited an illustration in a work site where standstill of work was caused due to labor shortages, which was not a relevant event especially during phases of extraordinarily inclement weather...
13 Pages(3250 words)Essay
sponsored ads
Save Your Time for More Important Things
Let us write or edit the essay on your topic "Law of Contract, Case Law" with a personal 20% discount.
GRAB THE BEST PAPER

Let us find you another Essay on topic Law of Contract, Case Law for FREE!