The objectives of the Justice Policy Institute - Essay Example

Comments (0)
Add to wishlistDelete from wishlist
Cite this document
Summary
Sending offenders to jail is costing a lot. It is said to be taking great tolls on the states. There are alternatives being offered among which is the one undertaken by the Justice Policy Institute. Criminals are humans. They change for the better or maybe for the worse…
Download full paperFile format: .doc, available for editing
HIDE THIS PAPERGRAB THE BEST PAPER92.4% of users find it useful 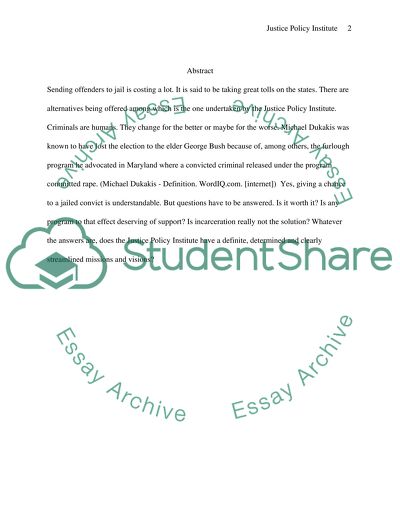 Extract of sample "The objectives of the Justice Policy Institute"

Download file to see previous pages [internet]) Yes, giving a chance to a jailed convict is understandable. But questions have to be answered. Is it worth it Is any program to that effect deserving of support Is incarceration really not the solution Whatever the answers are, does the Justice Policy Institute have a definite, determined and clearly streamlined missions and visions
With its objectives focused on offering or proposing alternatives to incarceration, the Justice Policy Institute, a non-profit organization, believes that the options incorporated in its goals and missions are safe, effective and fair and these are achieved, among others, through researching into the roots and outcomes of incarceration. (Schiraldi, Vincent Schiraldi, Jason Colburn and Eric Lotke. An Examination of the Impact of Three Strikes Laws. THREE STRIKES AND YOU ARE OUT. [internet].) It also is a proponent of changing the perceptions of the public regarding the issue of jailing. Furthermore, it commits to assist the government and the communities along that line. Interestingly, the organization, even giving it the benefit of the doubt that it has the sincerity in proposing alternatives better and more worthwhile than prisons, the goals it has outlined seem to be overshadowed by the attendant vagueness. It even takes serious issue on the so-called three strikes laws which increase the penalties of three-time offenders stating that the subsequent infractions are usually non-violent and, therefore, there is really not much necessity of added punishment.
The Arguments of the Proponents
The institute defines its mission as one to rally the promotion of solutions allegedly more effective than reliance on incarceration or imprisonments in fixing social problems. The proponents and advocates of the Justice Policy Institute further claim that, as a matter of fact, the United States of America has had remarkable rise in the numbers of prisoners and that its rates of incarceration top world statistics. They also criticize political hyperboles regarding declarations of getting tough on crimes. The institute leadership further raises the issue that social predicaments such as mental health and substance abuse can better be addressed by sending the patients not behind bars but in some other places where they can instead be better taken cared of. The institute stresses that the country is paying for more than two million incarcerated people. Owing to those dynamics, the leaders of the group advance the idea that better solutions are at hand and need to be applied. Such approaches as supportive of treatment and other options involving the communities are claimed to promote safety and save money. The organization expresses the view that there are wiser ways to rehabilitate criminals. It says more work must be done. (Our Mission. Justice Policy Institute. [internet])
Going over its website postings, one can see the activities of the institute: the reports it renders opposing development in the prison system, the researches it makes on jail statistics and other seemingly relevant items. One issue tells of ...Download file to see next pagesRead More
Share:
Tags
Cite this document
(“The objectives of the Justice Policy Institute Essay”, n.d.)
The objectives of the Justice Policy Institute Essay. Retrieved from https://studentshare.org/miscellaneous/1506077-the-objectives-of-the-justice-policy-institute

CHECK THESE SAMPLES OF The objectives of the Justice Policy Institute

... up of EU and the functioning of EUs institutions and policies and the satisfactory continuation of the EUs growth. The enlargement is an ongoing process. EU is now handling the cases of prospective members. In this context, the situation and prospectus of the candidature of Turkey is entirely different. This is the most toughest one the EU has ever faced and it is still under consideration. It is the biggest country to apply for membership and some member states have serious reservations about its candidature being ever accepted. Cyprus question is the main cause of dispute and puts a mark on the candidature of Turkey. The accession negotiations began in 2005 and it still continues. Many members put forth the argument—granted Turkey...
9 Pages(2250 words)Case Study
sponsored ads
Save Your Time for More Important Things
Let us write or edit the essay on your topic "The objectives of the Justice Policy Institute" with a personal 20% discount.
GRAB THE BEST PAPER

Let us find you another Essay on topic The objectives of the Justice Policy Institute for FREE!