Comments (0)
Add to wishlistDelete from wishlist
Cite this document
Summary
Scandals hovering around public figures have been engaging the attention of the people recently and a rich medley of articles, research papers and books are churned out on the subject. The present public engagement, discussed on all forums, on the subject might give the false impression that this is a new phenomenon…
Download full paperFile format: .doc, available for editing
HIDE THIS PAPERGRAB THE BEST PAPER92.3% of users find it useful 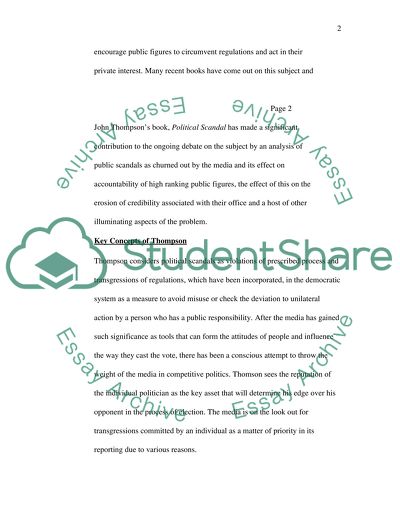 Download file to see previous pages This is because there was no perception of accountability to the public in many societies in the past. Moreover the dissemination of scandals far and wide, and as frequently as is possible, is made possible by the development of a plethora of media now available. This has resulted in lots of unearthing of covert actions of people in power. There are some people who look at the media coverage of scandals as a form of entertainment available to the people. However many consider the role of media as that of vigilant watch dog that unearths the wrongs in society and brings remedial action and plugs in all loopholes that encourage public figures to circumvent regulations and act in their private interest. Many recent books have come out on this subject and
John Thompson's book, Political Scandal has made a significant contribution to the ongoing debate on the subject by an analysis of public scandals as churned out by the media and its effect on accountability of high ranking public figures, the effect of this on the erosion of credibility associated with their office and a host of other illuminating aspects of the problem.
Thompson considers political scandals as violations of prescribed process and transgressions of regulations, which have been incorporated, in the democratic system as a measure to avoid misuse or check the deviation to unilateral action by a person who has a public responsibility. After the media has gained such significance as tools that can form the attitudes of people and influence the way they cast the vote, there has been a conscious attempt to throw the weight of the media in competitive politics. Thomson sees the reputation of the individual politician as the key asset that will determine his edge over his opponent in the process of election. The media is on the look out for transgressions committed by an individual as a matter of priority in its reporting due to various reasons.
While some media report these transgressions merely to enhance their readership or viewer ship others may be committed to their role as watchdog
Page 3
in a healthy democracy. In addition to this, in competitive politics, the motive may be to tarnish the reputation of the opponent by constant bombardment of the opponent by targeting weakest points. In this tendency Thompson sees the dangers of dragging political non-issues related to the personal conduct of public figures into vortex of media reporting. In many democracies, including some of the old and celebrated ones, the narrow-minded struggle for power heavily draws on the repertoire of sex scandals real or concocted to deal a deathblow to the reputation of the other. The mud slinging campaigns and personal vituperation that appear so blatantly in the media, Thompson, warns will undermine the social trust of the democratic system (p.251).
The exposure of political scandals if undertaken responsibly, Thompson believes, can strengthen the democratic institutions. What he calls power scandals are those that contravene or seek to circumvent the rules, laws and established procedures that govern the exercise of political power (P.196). In a democratic set up power is to be exercised openly and the role of the media as a watchdog makes the exercise of the power an openly done task and hence accountable. However Thompson does not think ...Download file to see next pagesRead More
Share:
Tags
Cite this document
(“Central Concerns in John Thompsons Political Scandal Essay”, n.d.)
Central Concerns in John Thompsons Political Scandal Essay. Retrieved from https://studentshare.org/miscellaneous/1505980-central-concerns-in-john-thompsons-political-scandal

In the nineteenth century, the term democracy still had uncomplimentary connotations, most of the time; some understand it as a system of mob rule. Now, however, we are all democrats. Liberals, conservatives, socialists, communists, anarchists, and even fascists are all eager to proclaim the virtues of democracy and to demonstrate their own democratic credentials. Indeed, as the major ideological systems faltered and collapsed in the late twentieth century, the flames of democracy appear to burn yet more strongly (Huth & Allee, 2003). As the pull of socialism paled, and the intrinsic worth of capitalism has been called into query, democracy appeared as possibly the single unwavering and lasting principle in the postmodern poli...
6 Pages(1500 words)Assignment

...Political communication: Today, voters no longer make decisions based only on personal opinion but view most issues through the eyes and ears of the media. Most options arise from interpretation of the symbols obtained from mass media. Political advertising is a prominent media for reaching voters. Political advertisements aim at increasing issue knowledge, influencing perceptions of the candidate’s character, altering attitudes and affecting candidate preference. In most political advertisements, politicians essentially promote themselves, their thoughts, beliefs, values, image and political propaganda. These advertisements can have a rather persuasive influence on voters. Political ads can convey both positive and negative feelings...
6 Pages(1500 words)Essay
sponsored ads
Save Your Time for More Important Things
Let us write or edit the essay on your topic "Central Concerns in John Thompsons Political Scandal" with a personal 20% discount.
GRAB THE BEST PAPER

Let us find you another Essay on topic Central Concerns in John Thompsons Political Scandal for FREE!