Comments (0)
Add to wishlistDelete from wishlist
Cite this document
Summary
Youth gang members incarceration predicts a number of concerns about their influences on juvenile detention facilities, undermining of programs, and the compromise of institutional security and public safety…
Download full paperFile format: .doc, available for editing
HIDE THIS PAPERGRAB THE BEST PAPER94.4% of users find it useful 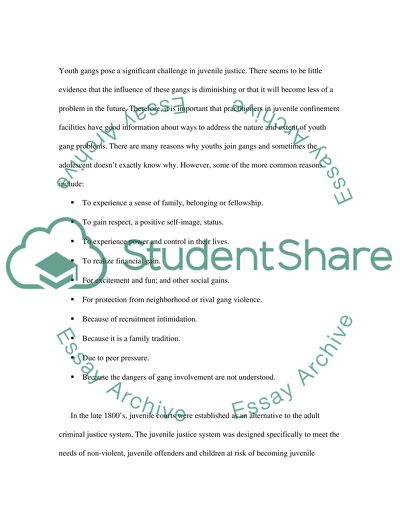 Download file to see previous pages The question whether convicted youth gang members should be treated like other juvenile delinquents including status offenders is very crucial in very many states. This resource manual strives to address this question. As a starting point, this paper will look at the evolvement of gangs and the background of juvenile justice system. There is no one accepted or straightforward definition of a gang. The public and media use the term ‘gang’ more loosely than those in the criminal justice system. A youth gang is commonly thought of as a self-formed association of peers having a gang name and recognizable symbols, identifiable leadership, a geographic territory, a regular meeting pattern, and collective actions to carry out illegal activities. Most gang members define their gang along one or two basic definitional lines which are involvement in crime and the affiliation and cultural aspects of gang membership that make it like a family in the eyes of many members. The youth gang problem in many states has become an important policy issue largely because of the increasing youth gang violence and the apparent proliferation of youth gangs throughout all sectors of the nations.
Youth gangs pose a significant challenge in juvenile justice. There seems to be little evidence that the influence of these gangs is diminishing or that it will become less of a problem in the future. Therefore, it is important that practitioners in juvenile confinement facilities have good information about ways to address the nature and extent of youth gang problems. There are many reasons why youths join gangs and sometimes the adolescent doesn't exactly know why. However, some of the more common reasons include:
To experience a sense of family, belonging or fellowship.
To gain respect, a positive self-image, status.
To experience power and control in their lives.
To realize financial gain.
For excitement and fun; and other social gains.
For protection from neighborhood or rival gang violence.
Because of recruitment intimidation.
Because it is a family tradition.
Due to peer pressure.
Because the dangers of gang involvement are not understood.
In the late 1800's, juvenile courts were established as an alternative to the adult criminal justice system. The juvenile justice system was designed specifically to meet the needs of non-violent, juvenile offenders and children at risk of becoming juvenile delinquents. Historically, juvenile crimes were considered "youthful indiscretions," warranting lenient treatment and rehabilitative responses. Unlike the offense-based adult system, the juvenile justice system is offender based, focusing on rehabilitation rather than punishment. Recently, many states have attempted to strike a balance among system and offender accountability, offender competency development and community protection.
According to the United Nations Convention on the Rights of the Child ("U.N. Child Convention"), which the General Assembly adopted and formally ratified in 1998, Children and adults should not be treated equally under the international human rights regime. Before proceeding, it is necessary to examine the special rights of children enumerated in the same. Anti-gang legislation was a sudden shift in the legal trajectory that could be traced for the treatment of juvenile delinquents. Previously, implementation of significant reforms including specialized procedures and legal norms for the treatment of juveniles in conflict with the law was encouraged. This exceptional process, however, was revoked under anti-gang legislation resulting in recognition and treatment of juve ...Download file to see next pagesRead More
Share:
Tags
Cite this document
(“Youth Gang Members Essay Example | Topics and Well Written Essays - 1250 words”, n.d.)
Youth Gang Members Essay Example | Topics and Well Written Essays - 1250 words. Retrieved from https://studentshare.org/miscellaneous/1505734-youth-gang-members

Youth is a period when they have to acquire new tools to become part of the workforce and assume responsibilities in the world. Youth can no longer be defined in terms of formal education or on the basis of age. They are a heterogeneous group consistently unstable and undergoing the process of evolution. The concept of youth has changed as modern societies have evolved. It is the transition from childhood to adulthood and the youth are tossed from one state to another either through the condition of their own mind or by the norms of the society. Ironically, this is precisely the age when they need the right guidance to channel their energies in the right direction. While they are full of vigor and energy they also undergo an inner...
7 Pages(1750 words)Term Paper

Especially in these Modern times, being a leader is by no means an easy task. It calls for a lot of sacrifices and hard work because the youth of today are not the youth of a few centuries ago. Human beings are like institutions that undergo various changes throughout their lifespan. In the beginning, they are filled with vigor and vitality, but over a period of time, due to lack of proper guidance or laxity on the part of its leaders, monotony sets in and one loses their interest. Hence one of the vital...

... within the gang. In order to look back for a moment, the larger structure which is society which we are universally taught to function in, is not only the higher power anymore but is also an enemy. A prospering economy which adopts a night life like so many other states and countries, is only patronizing the enemy, from the pseudo-moral code of a gang member and his/her gang family. It goes without saying that refraining from disrupting said economy, is in everyone’s best interest which is of course on a level higher than the hierarchy of the gang. Gang activity and profit is propelled through violence and terror. By terrorizing such a macrocosm is viewed by gangs as an enemy or a rival even but never an authority...
12 Pages(3000 words)Term Paper

Additionally, evidence shows the affects an unstable family environment can have psychologically and behav...

A local area of Ofsted provides this organization with a perfect opportunity to inspect children and young people and contribute much to develop social networks. The concept of social capital is a key concept, which determines the Coalition Government’s aspirations for a Big Society development. It is relevant to distribute power "from the state to society; from the center to local communities, giving people the opportunity to take more control over their lives" (An investigation into the delivery of Integrated Youth Support Services (IYSS) in England: Headline findings from quantitative data collection, July 2010). Youth organization works in three main directions: participation in education, employment, and training. Young...
6 Pages(1500 words)Coursework

The Impact of Media on the Youth

The objective of this paper is to present a debate on the impact of media on youth. The question that this research paper attempts to answer is whether media is reshaping the attitude, actions, and ideals of the youth in a negative manner? For this, both sides of the debate would be considered. This paper claims that media is gaining too much power in today’s world and thus developing the wrong ideals and values in the young generation.
One of the most alarming effects of media on the youth is the way it exposes them to violence. According to Bar-on (2000), an average child is exposed to 12,000 acts of violence through media each year. The research revealed that 61% of the content available on television is violent in...
8 Pages(2000 words)Case Study

... Youth in Cuban Anti-Revolution Approximately half a century has gone by since the beginning of the revolution in Cuba as it carries on to incite strong reactions, continuous mentions and opposing elucidations. The Sixties are equally controversial, as the historical heroes are challenged by researchers from the modern age group, who have a very cloudy commemoration of that era but still have went on to research and argue about the happenings in that historical time. The key factors that consolidate and connect the island of Cuba and the decade of the Sixties are matters surrounding the youth. The youth, the decade of 1960 and the Cuban Revolution are triple coordinates that this research will mainly focus on. However there will be focus...
8 Pages(2000 words)Case Study

Japans Subculture and How Youth Creates Its Own Alternative Markets

... Otaku: Japan’s Subculture and How Youth Creates Its Own Alternative Markets Introduction Within a fluid-like nature of the contemporary society, a section of the Japanese youths has crystallized what scholars would refer to a kind of a subculture, popularly known as Otaku. Scholars have noted that this is one of the fast growing and so forms one of the largest subcultures in contemporary Japan. In a movie directed by Jeffrey Clark, a good representation of the postmodern society with the impact of Otaku subculture is presented (True Otaku Documentary). This subculture that was once disregarded has got the global attention and has hit the economic headlines with a fast growing competitive market share. The paradox that scholars have since...
14 Pages(3500 words)Case Study
sponsored ads
Save Your Time for More Important Things
Let us write or edit the essay on your topic "Youth Gang Members" with a personal 20% discount.
GRAB THE BEST PAPER

Let us find you another Essay on topic Youth Gang Members for FREE!