Comments (0)
Add to wishlistDelete from wishlist
Cite this document
Summary
Terrorism has affected our lives and there are no two ways about it, the impact it has left on the people who have lost their near and dear ones cannot be put across in words. There should be a no non-sense policy which should be followed by the government of the countries when it comes to terrorism…
Download full paperFile format: .doc, available for editing
HIDE THIS PAPERGRAB THE BEST PAPER94.2% of users find it useful 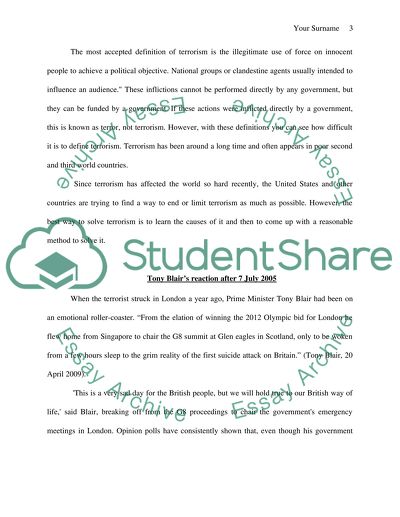 Download file to see previous pages As contemporary issue for the purpose of this foreign policy brief, terrorism refers "to any violent act directed against noncombatants and carried out by an organized group rationalizing such behavior with political and religious arguments."(Davidson, 20 April 2009)
Terrorism is the issue on every one's mind these days. It is global disorder that we have been fighting, and probably will be fighting for many years to come. What is terrorism The word refers different things to different people at different times and the same is very evident. "Violent activity at one point in time may be called terrorism, while the same action may be deemed war, liberation, or crime at another time in history." (Chossudovsky, 24 April 2009)
The most accepted definition of terrorism is the illegitimate use of force on innocent people to achieve political objective. National groups or clandestine agents usually intended to influence an audience." These inflictions cannot be performed directly by any government, but they can be funded by government. If these actions were inflicted directly by government, this is known as terror, not terrorism. However, with these definitions you can see how difficult it is to define terrorism. Terrorism has been around long time and often appears in poor second and third world countries.
Since terrorism has affected the world so hard recently, the United States and other countries are trying to find way to end or limit terrorism as much as possible. However, the best way to solve terrorism is to learn the causes of it and then to come up with reasonable method to solve it.
Tony Blair's reaction after 7 July 2005
When the terrorist struck in London year ago, Prime Minister Tony Blair had been on an emotional roller-coaster. "From the elation of winning the 2012 Olympic bid for London he flew home from Singapore to chair the G8 summit at Glen eagles in Scotland, only to be woken from few hours sleep to the grim reality of the first suicide attack on Britain." (Tony Blair, 20 April 2009).
'This is very sad day for the British people, but we will hold true to our British way of life,' said Blair, breaking off from the G8 proceedings to chair the government's emergency meetings in London. Opinion polls have consistently shown that, even though his government has been buffeted by many a scandal and internal squabbling, many Britons feel secure with Blair's 'sure touch' on terrorism.
"Unlike US President George W Bush, who initially hesitated to return to Washington after the attacks, and Spanish leader Jos Maria Aznar, who by blaming the separatist movement ETA turned the 2004 Madrid bombings into an instant political football, Blair showed leadership in crisis, analysts believe." (Tony Blair, 24 April 2009).
'His initial response showed that he was very much in touch with the British public,' said Frederick Fors, Swedish author of the study Bombings in London: Terrorism and institutionalized crisis management.
Fors, from Crisis mart, the National Center for Crisis Management Research and Training of the Swedish National Defense College in Stockholm, believes that Britain's long experience with Irish Republican Army (IRA) terrorism, and Blair's conviction that Britain would become target after 9/11, helped prevent an 'overreaction' to July 7.
'Given the scale of events in London, it might have ...Download file to see next pagesRead More
Share:
Tags
Cite this document
(“Terrorism and Human Rights Essay Example | Topics and Well Written Essays - 1250 words”, n.d.)
Retrieved from https://studentshare.org/miscellaneous/1505571-terrorism-and-human-rights

CHECK THESE SAMPLES OF Terrorism and Human Rights

...Hello, I have read this and thinks it’s perfect I have slight amendments which are highlighted in red. thanks Universal Declaration of Human Rights Introduction Human rights are defined as, the basic standards by which we can identify and measure inequality and fairness. These rights are specified in the Universal Declaration of Human Rights.1 The United Nations adopted the Universal Declaration of Human Rights (UDHR) on the 10th of December 1948. It consists of a number of civil, cultural, economic, political, and social rights. Although, it is not legally binding, it provides an authoritative interpretation of several articles of the UN Charter; and the latter is binding on the member states of the United Nations.2 There are several...
8 Pages(2000 words)Case Study
sponsored ads
Save Your Time for More Important Things
Let us write or edit the essay on your topic "Terrorism and Human Rights" with a personal 20% discount.
GRAB THE BEST PAPER

Let us find you another Essay on topic Terrorism and Human Rights for FREE!