Comments (0)
Add to wishlistDelete from wishlist
Cite this document
Summary
Pythagorean triplets are integer solutions to the Pythagorean Theorem. Pythagoras lived around 500 BC, but Pythagorean triplets were first recorded as far back as 1700-1800 BC in Babylonia, inscribed on a clay tablet, known as Plimpton 322. A large number of integer pairs (a,c) for which there is an integer b satisfying Pythagoras' equation were systematically listed on it.
…
Download full paperFile format: .doc, available for editing
HIDE THIS PAPERGRAB THE BEST PAPER97.7% of users find it useful 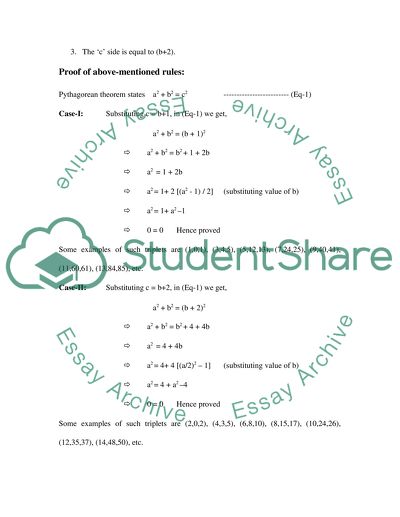 CHECK THESE SAMPLES OF Pythagorean triplets

...Ionian and Pythagorean views The first Greek philosophers who laid the foundation of the recorded and well-known philosophical works of Plato and Aristotle were the Ionians and the Pythagorean. They also influence the works of succeeding revolutionary scientists such as Galileo, Copernicus, Newton and even Einstein in the modern period. Their scientific philosophies also underpin the theoretical and basic methodological approaches of current scientific practice. It can be said that the Ionian School with its naturalist approach in observing the world and phenomena provided the empirical or inductive method that is seen as one way of arriving at scientific knowledge. The Pythagoreans on the other hand, with their basic conception...
4 Pages(1000 words)Case Study

Napier was one of the first, if not the first, to use the decimal point in expressing decimal fractions in a systematic way and according to the modern system of decimal notation[1].
The first tables of logarithms were published independently by the Scottish mathematician John Napier in 1614 and the Swiss mathematician Justus Byrgius in 1620. The first table of common logarithms was compiled by the English mathematician Henry Briggs [1]. Henry Briggs (1561-1630) was born at Warley Wood, near Halifax at Yorkshire and educated at St. John's College, in Cambridge. He is notable for changing Napier's logarithms into common/Brigessian Logarithms [2]. In the year 1616, Henry Brigss visited John Napier in his home in Edinburgh t...
5 Pages(1250 words)Essay

...THE PYTHAGOREAN THEOREM [Source: http www.arcytech.org/java/pythagoras/preface.html] April 30, 2008 The Pythagorean Theorem In mathematics, the Pythagorean Theorem is a relation in Euclidean geometry among the three sides of a right triangle. The theorem is named after the Greek mathematician Pythagoras who lived in the 6th century B.C. The theorem is as follows: "In any right angle triangle, the area of the square of the side opposite the right angle i.e. whose side is the hypotenuse is equal to the sum of the areas of the squares of the two sides that meet at a right angle i.e. whose sides are the two legs" In other words The square on the hypotenuse is equal to the sum of the squares on the other two sides Geometric...
14 Pages(3500 words)Essay

Theorem of Pythagoras in Mathematics

... the pair ascribed to Pythagoras, are amicable.They are the perfect, deficient, and abundant numbers.A number is perfect if it is the sum of its proper divisors; deficient if it exceeds the sum of its proper divisors, and abundant if it is less than the sum of its proper divisors.So God created the world in six days, a perfect number, since 6= 1 + 2 + 3". (12) "People those times told fortunes with that number and they used an amulet to avert evils, the figulate numbers were found by the Pythagorean. These numbers, considered as the number of dots in certain geometrical configurations, represented a link between geometry and arithmetic". (13) Fig 1.4 (14) "As a last and very remarkable discovery about numbers, made by the Pythagoreans...
12 Pages(3000 words)Math Problem

...PYTHAGOREAN TRIPLES The Pythagorean Theorem is probably one of the first principles learned in a Trigonometry It is about a property of all right triangles showing a relationship between their sides given by the equation c2 = a2 + b2; that is, the square of the longest side is equal to the sum of the squares of the remaining two sides (Knott 2009). Hence, given any two sides of a right triangle (triangle with a 90-degree angle) the unknown side can always be solved by algebraically manipulating the equation presented above. A special case of such triangles is when all the three sides, a, b and c, are integers, thus generating a Pythagorean Triple (Bogomolny 2009). The most popular example of which is the 3-4-5 triangle, the triple...
2 Pages(500 words)Essay

...Pythagorean Theorem and Quadratic Equation Introduction Discovered and developed by scientist and mathematician, Pythagoras (c. 570 BC – c. 495 BC),‘Pythagorean Theorem’ is a widely applied mathematical statement which illustrates the relation of the three sides of a right triangle that consists of two legs and a longest side, known as the hypotenuse. In equation, it is given by -- c2 = a2 + b2 where the variables ‘a’ and ‘b’ refer to the length measures of the right triangle’s legs while the variable ‘c’ pertains to the hypotenuse. Applications of Pythagorean Theorem are recognized in various fields of maths such as algebra, trigonometry, and calculus. Problem 98: Buried Treasure Ahmed has half of a treasure map...
1 Pages(250 words)Speech or Presentation

... Pla One of History’s Greatest Contributors The dictionary typically defines philosophy as “the love of or search for wisdom or knowledge” or “as the theory or logical analysis of the principles underlying conduct, thought, knowledge and the nature of the universe” (Neufeldt, Goralnik, 1994, p. 1015). With such a general definition, one might begin to understand the complexities involved in studying philosophy as it seems to encompass just about all knowledge pursuits. Perhaps part of the confusion in trying to define the term can be found in the early days of the science when it applied almost universally to all avenues of knowledge in ancient Greece. The term itself derives from an ancient Greek word that translates to “love... Pla One...
12 Pages(3000 words)Case Study
sponsored ads
Save Your Time for More Important Things
Let us write or edit the essay on your topic "Pythagorean triplets" with a personal 20% discount.
GRAB THE BEST PAPER

Let us find you another Essay on topic Pythagorean triplets for FREE!