Comments (0)
Add to wishlistDelete from wishlist
Cite this document
Summary
HISTORICAL ANALOGY: "Analogy is both the cognitive process of transferring information from a particular subject (the analogue or source) to another particular subject (the target), and a linguistic expression corresponding to such a process. In a narrower sense, analogy is an inference or an argument from a particular to another particular, as opposed to deduction, induction, and abduction, where at least one of the premises or the conclusion is genera"…
Download full paperFile format: .doc, available for editing
HIDE THIS PAPERGRAB THE BEST PAPER97.9% of users find it useful 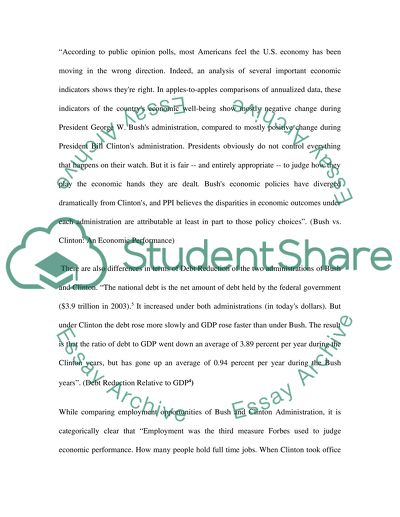 Extract of sample "Bush vs. Clinton: An Economic Performance"

Download file to see previous pages "According to public opinion polls, most Americans feel the U.S. economy has been moving in the wrong direction. Indeed, an analysis of several important economic indicators shows they're right. In apples-to-apples comparisons of annualized data, these indicators of the country's economic well-being show mostly negative change during President George W. Bush's administration, compared to mostly positive change during President Bill Clinton's administration. Presidents obviously do not control everything that happens on their watch. But it is fair -- and entirely appropriate -- to judge how they play the economic hands they are dealt. Bush's economic policies have diverged dramatically from Clinton's, and PPI believes the disparities in economic outcomes under each administration are attributable at least in part to those policy choices". (Bush vs. Clinton: An Economic Performance)
There are also differences in terms of Debt Reduction of the two administrations of Bush and Clinton. "The national debt is the net amount of debt held by the federal government ($3.9 trillion in 2003).5 It increased under both administrations (in today's dollars). But under Clinton the debt rose more slowly and GDP rose faster than under Bush. The result is that the ratio of debt to GDP went down an average of 3.89 percent per year during the Clinton years, but has gone up an average of 0.94 percent per year during the Bush years". (Debt Reduction Relative to GDP4)
While comparing employment opportunities of Bush and Clinton Administration, it is categorically clear that "Employment was the third measure Forbes used to judge economic performance. How many people hold full time jobs. When Clinton took office there were 109 million jobs in the U.S. Three-and-a-half years later, there were 120 million, or a net growth of 11 million jobs. In raw numbers, this is the most prodigious record of job creation in modern history. In percentage terms, it trails only Jimmy Carter's accomplishment of adding 10 million jobs in the late seventies.
Bush's record on employment is equally legendary though for the opposite reason. When he took office, there were 132 million jobs in the U.S. Today, more than three-and-a-half years later, there are just over 131 million for a net loss of one million jobs. The standard-and truthful-rebuke is that Bush has been the first president since Herbert Hoover to have presided over a net loss of jobs. As with GDP, Bush is now out trying to claim heroic results for a recent short period but the odium of the larger failure, especially when put into historical context, is inescapable. Clinton 3; Bush 0" (Evaluating Bush's Economic Performance: A Field Guide for the Perplexed)
"When it comes to inflation, Bush faced a huge increase in worldwide oil prices, but Clinton did not. In the consumer price index that excludes energy prices, inflation averaged 2.1 percent in the past four years, down from 2.9 percent in 1993-96.
When calculating real incomes, however, nominal increases in wage and benefits are reduced by total inflation, including higher energy prices. This would seem to put the past four year ...Download file to see next pagesRead More
Share:
Tags
Cite this document
(“Bush vs. Clinton: An Economic Performance Essay”, n.d.)
Bush vs. Clinton: An Economic Performance Essay. Retrieved from https://studentshare.org/miscellaneous/1505391-bush-vs-clinton-an-economic-performance

“Bush Vs. Clinton: An Economic Performance Essay”, n.d. https://studentshare.org/miscellaneous/1505391-bush-vs-clinton-an-economic-performance.
Comments (0)
Click to create a comment or rate a document

CHECK THESE SAMPLES OF Bush vs. Clinton: An Economic Performance

..., which is another major limitation. Recommendations In consideration to the analysis of this report and limitations mentioned-above, I am of the view that published accounting data provides the most reliable, economical and easiest way to evaluate the performance of bank. However, in order to make the comparisons of banks’ performance easier, there is a need to standardize financial reporting. Bibliography (n.d.). Retrieved October 21, 2009, from Wehner.Tamu: wehner.tamu.edu/finc.www/finc-kolari/Banking/bank3.ppt Badreldin, M. A. (2009). Measuring the Performance of Islamic Banks by Adapting Conventional Ratios. German University in Cairo. Banking and The Banking Industry . (n.d.). Retrieved October 19, 2009, from Economywatch : http...
7 Pages(1750 words)Case Study

... increase in the income of women which is expected to be $5.1 trillion by 2013. By earning more and influencing purchase decisions, women have acquired greater power in the market place. There is a greater emphasis on building vibrant business ecosystems that harness a shared foundation of technology and knowledge to accelerate growth and innovation (Tapscott, 2010). The Chinese exuded greater confidence than ever before and flaunted their economic performance. A visible signs of power shifting to east particularly China were clear and loud. Whether this shift will lead to cooperation or confrontation is a question that hovers on the western and American political and business mindscape. The projections were however marked by cautious...
7 Pages(1750 words)Coursework

The best possible outcome for SA is when it plays L while SS plays U and the best possible outcome for SS is when it plays L, and the other plays U. These outcomes (L, U) and (U, L) are difficult to achieve. This is because these strategies are not dominant for both. There is an incentive for one player to deviate.
If the prices are decided every week then the strategy would change in terms of the components. For the repeated games, the Nash equilibriums of all the sub-games are the same as the equilibrium of each one-shot game. The number of components in the strategy would increase because of the repetition of the game (both would still play L, L) however the pay off associated with the game would be increase by times of th...
6 Pages(1500 words)Essay
sponsored ads
Save Your Time for More Important Things
Let us write or edit the essay on your topic "Bush vs. Clinton: An Economic Performance" with a personal 20% discount.
GRAB THE BEST PAPER

Let us find you another Essay on topic Bush vs. Clinton: An Economic Performance for FREE!