Comments (0)
Add to wishlistDelete from wishlist
Cite this document
Summary
Public Interest" pertains to any work that is initiated for the benefit of the public of the state. If the State issues certain directives or order that stands to benefit its citizens, the move is said to be in favour of the public interest. The concept of public interest is an important element in many areas of law, a fact that more than one area of the law impinges on issues subject to litigation…
Download full paperFile format: .doc, available for editing
HIDE THIS PAPERGRAB THE BEST PAPER93.3% of users find it useful 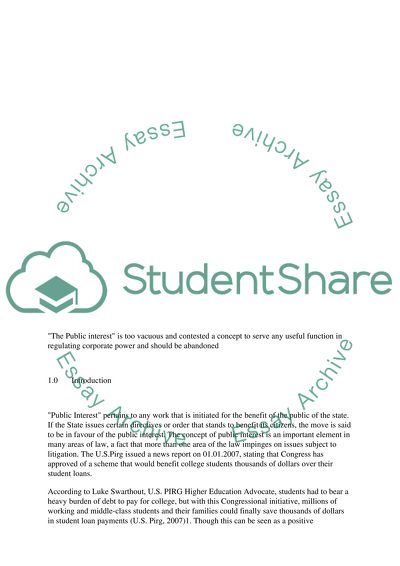 Download file to see previous pages Pirg, 2007)1. Though this can be seen as a positive development by Congress, in favour of public interest, a lot more needs to be done in protecting the public. There is a lot to be desired, but governments around the world face stiff legislative moves by an entity, that seeks to make the most of their interest at the interest of the public- the corporate.
On 3 October 2002, the contract of the British Railway with Railtrack came to an end, which initiated the government to establish Network Rail as the new contractor, provided Network Rail guaranteed that it would reinvest the profits into further railway infrastructure development in the pursuit of a safer and more reliable railway system. On closer observation, it is clear that these guarantees raise serious concerns in respect of the accountability of Network Rail; firstly, as its status as a private sector organisation, and secondly, its implications for the Treasury and the tax payer. This view could have been avoided had the Government adopted an alternative approach, commonly referred to as a 'government sponsored enterprise'. This would have given the government more authority in handling such a vital transport system in the country. This was not to be, and the government again goofed up an opportunity to gain increased control of the railway infrastructure at a significantly reduced price. The corporate was successful in twisting the government arm to its benefit (Lisa Whitehouse, 2003)2.
Large, transnational corporations (TNC) are becoming increasingly powerful. Additional problems result from a variety of social injustice and human rights violations. This is not to say that corporates are a bane to society, but the muscle power of corporates to dictate and run policies in their favour is most disturbing. Profits are the driving factor, and not workers satisfaction. Corporates work tirelessly to improve their market presence and in the bargain, has no time or inclination to focus on the treatment vetted to their co-workers, or how society and the environment are affected.
Sometimes, the role of these multinational giants can be seen in the backdrop of deliberate abdication of social clauses and regulations to maximise their profits.
These companies manipulate international trade pacts and agreements, in order to maximise profits, such as cheap labour, government incentives and subsidies, tax rebates and so on (Anup Shah, 2002)3.
Tax avoidance adds to the woes of the general public. Suppressing the formation of workers union to fight for their co-workers justice, these corporates run the show to their advantage at all levels. The future for the workers looks ...Download file to see next pagesRead More
Share:
Tags
Cite this document
(“Regulating Corporate Power and Company Law in United Kingdom Essay”, n.d.)
Regulating Corporate Power and Company Law in United Kingdom Essay. Retrieved from https://studentshare.org/miscellaneous/1505023-regulating-corporate-power-and-company-law-in-united-kingdom

As a principle, HP doesn’t reveal non-public product details, financial information, marketing, R &D, manufacturing, and Personnel Data. We will work on whatever information the company discloses and is available in the common domain of knowledge to assess our strengths, marketing mix, current strategies, current events, and global information and discuss how they can be more streamlined in. In today’s world, no amount of market strategizing is enough, no amount of competitor’s latest strategies and innovation and we have always to remain in an ever-evolving role.
We have chosen our Personal Computer as the product of our current study. Just for sake of recall, we make mention of current product segmenta...
8 Pages(2000 words)Case Study

For centuries, ethics has been a crucial and significant component of human societies that contributed enormously to the creation of norms and values through religious influences, as well as through the contribution of intellectuals and philosophers in society. Unfortunately, nowadays, it is an observation that individuals, organizations, and even nations have commenced overlooking the phenomenon of ethics in their practices, specifically in the business sector that has become the major stakeholder confronting criticisms related to ethical practices. Critics (Crane, pp. 23-29, 2007) argue that business ethics has now become a component limited to theoretical policies and frameworks of business organizations, and such principles an...
10 Pages(2500 words)Case Study
sponsored ads
Save Your Time for More Important Things
Let us write or edit the essay on your topic "Regulating Corporate Power and Company Law in United Kingdom" with a personal 20% discount.
GRAB THE BEST PAPER

Let us find you another Essay on topic Regulating Corporate Power and Company Law in United Kingdom for FREE!