Comments (0)
Add to wishlistDelete from wishlist
Cite this document
Summary
In the 18th century Sorrows of Young Werther was written by Goethe during the German golden age of literature which led the cultural movement known as Romanticism. Romanticism was dissatisfaction with any world, whether real or not.
The pursuit of happiness by Werther is clearly elaborated as the romantic hero tried to find happiness but in vain as his search ended by his death…
Download full paperFile format: .doc, available for editing
HIDE THIS PAPERGRAB THE BEST PAPER99% of users find it useful 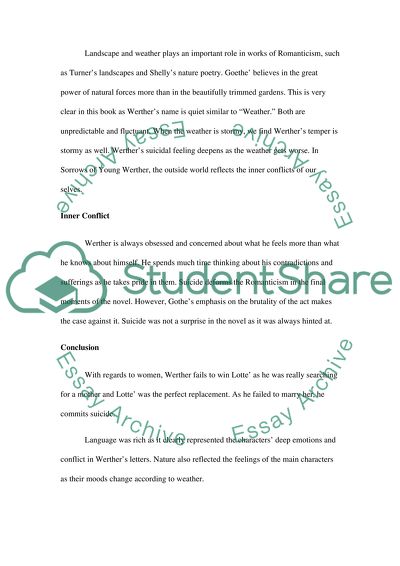 Extract of sample "The Sorrows of Young Werther by J.W. Von Goethe"

“The Sorrows of Young Werther by J.W. Von Goethe Book Report/Review”, n.d. https://studentshare.org/miscellaneous/1504994-the-sorrows-of-young-werther-by-jw-von-goethe.
Comments (0)
Click to create a comment or rate a document

CHECK THESE SAMPLES OF The Sorrows of Young Werther by J.W. Von Goethe

... Character analysis of Werther in Johann Wolfgang von Goethe's The Sorrows of Young Werther The news rippled through the film industry in 2006 that Romper Stomper director Geoffrey Wright, who is in his mid-40s, had become a father for the first time. Many who knew him observed that fatherhood might be good for him, might settle him down. Whatever you want to call it -- volatility or thuggery, passion or belligerence, courage or obstinacy -- Wright has it. Wright's baby is named Nevada; he met her mother, Ruby O'Rourke, during the making f his latest film, an antipodean Macbeth influenced by Melbourne's gangland wars. O'Rourke sings the witches' chant double, double toil and trouble'' on the soundtrack. The film is a bloody and brutal big...
6 Pages(1500 words)Essay

... Character analysis of Werther in Johann Wolfgang von Goethe's The Sorrows of Young Werther Introduction Johann Wolfgang von Goethe was brought into the world on August, 28th, 1749, in Frankfurt, Germany. His father was a well-respected German, who at the time was wealthy, educated, and of high social class. His mother was the progeny of the councilor, Textor. His mother inspired Goethe by making up stories as a child. In some ways this sparked the beginning of his career. Goethe's father, as a man of power, sought for him to receive the best education possible. Goethe was provided a private teacher who lived with the Goethes. At the age of eight years, Goethe was able to read and write at elementary level in the German, French, Italian...
10 Pages(2500 words)Book Report/Review

The Sorrows of Young Werther

... s Passion is what drives Goethe's Sorrows of Young Werther - Right until the End In Goethe's Sorrows of Young Werther, the protagonist's characteristics and ideas define him as the prototypical romantic personality. The Romantic Movement emphasizes emotion over reason, an idea that Werther emulates throughout his life. Werther loves pastoral settings; in nature, he feels most in touch with his emotions. He rejects rationality and complexity with the sentiment that life is an adventure to be guided by intuition. Werther's longing for his love, Lotte, is a paradigm of the Romantic concept of longing, one's constant yearning for something that they will never possess or know. Werther finds Lotte to be the object of his hopeless desire...
3 Pages(750 words)Essay

Food Advertising and Its Impact on Young Minds

Issue of fairness: I believe like most parents and consumer protection groups that advertising directly to children is dangerous and unethical as it can be deceptive and manipulative. It also promotes consumerism and poor nutritional habits to a defenseless target audience.
To create awareness and promote stricter Regulations: In the UK, as compared to many other European nations, there are currently few policies or standards for food advertising and marketing aimed at children. For example, The Nordic countries are at the forefront of protecting children from the effects of advertising. Sweden has the strictest controls in Europe and in 1991 instituted a ban on television and radio advertising targeted at children under the...
18 Pages(4500 words)Research Proposal

Why Did George W. Bush Win the 2004 Presidential Election

Born into a family of power and privilege, George W. Bush was a mediocre student, compiled a disgraceful military record, consistently failed in his occupational ventures and suddenly transformed from a drunken, cocaine user to a conservative religious zealot. During his first term, the U.S. national budget went from a surplus to the highest debt in history, millions of jobs were lost, the country experienced a foreign attack, the country’s ideological divide grew wider and America’s allies were alienated (Cervera, 2004). How could this have happened, what mechanisms were in place for Bush to be rehired for a job he proved he could not do? A job that is responsible for the world’s largest economy and military. Ac...
12 Pages(3000 words)Term Paper

Now that young adults live in the radically different Internet age, in which more forms of media and communication vie for their attention, this compounds the reasons for adults to feel concerned about the possible distraction the new media could bring to stunt the proper development of their children. A big part of this fear relates to the sex-and-violence content of media, which is widely construed as capable of eroding the moral and social fiber of a nation that does not subscribe to media censorship. This is especially the case in the UK, which steadfastly pursues the media policy of self-regulation (PCC Citing online source).

Amongst the more popular complaints raised by older people against the Internet generation...

Goethe The Sorrows of Young Werther

...Johann Wolfgang von Goethe, a German whose works span the fields of poetry, drama, literature, theology, humanism and science. 28th August 1749 saw the birth of this, in the words of George Eliot “Germany’s greatest man of letters………and the last true polymath to walk the earth”. (Maertz, 2004). The Sorrows of young Werther written in 1774 was an epistolary novel- a novel written as a series of documents in the form of letters. The Sorrows of young Werther reports an unhappy romantic fascination which ends in suicide. The opening lines in the May 4th letter, “HOW happy I am that I am gone! My dear friend, what a thing is the heart of man!” sets the mood and tone of melancholy and freedom from the daily toils of man. “Have not other...
11 Pages(2750 words)Essay

Metternich was born at Koblenz. His father was a diplomat and retired from his service as Archbishopric of Trier to the court of Vienna and her mother was Countess Maria Beatrice Aloisia von Kageneck. The boy grew up under the influence of ideas that were prospering in the small German courts of the French sphere influenced during the Ancient Regime. Metternich started his legal education in the year 1778 at the University of Strasbourg. The outbreak of the French Revolution compelled him to leave his studies and in 1790 he was deputed as their Master of Ceremonies by the Catholic Bench of Westphalia Circle in Frankfurt. He was appointed for the coronation of Emperor Leopold II.
After staying for a long duration in England, M...
9 Pages(2250 words)Assignment

Handicap has since a long time ago ruled research in-game and incapacity. Understanding the movement "issues" which the individual has by the goodness of a physical, tactile or intelligent "catastrophe" has been the area of much research that concentrates on inability and game. Subsequently, the estimation of the game for incapacitated individuals has gotten to be perceived as one that fits a restoration methodology to incapacity.
East London has been known to set the phase when it comes to sports concerning the disabled. They have set up numerous Paralympic games that encourage the disabled participants to express their abilities within these games. There are several organizations that have come up to ensure that there is in...
6 Pages(1500 words)Assignment
sponsored ads
Save Your Time for More Important Things
Let us write or edit the book report/review on your topic "The Sorrows of Young Werther by J.W. Von Goethe" with a personal 20% discount.
GRAB THE BEST PAPER

Let us find you another Book Report/Review on topic The Sorrows of Young Werther by J.W. Von Goethe for FREE!