Comments (0)
Add to wishlistDelete from wishlist
Cite this document
Summary
Financially, the primary objective of a business organisation is the maximisation of shareholder value. According to Keown, this means the "maximization of the shareholder price" (2005) which, is irrefutably linked with the internal operation of the firm and the external perception of the different players in the company's environment…
Download full paperFile format: .doc, available for editing
HIDE THIS PAPERGRAB THE BEST PAPER91.3% of users find it useful 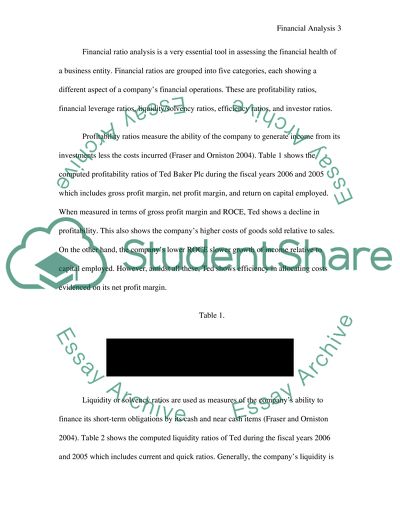 Download file to see previous pages In order to attain this goal, companies strive to manage their operations which are quantitatively reflected in their annual reports. Thus, at the heart of every decision made by a company is the primary concern about its possible effects on the owners.
The determination of Ted Baker Plc (Ted) creates and maximises value for shareholders can be aided by utilising financial analysis techniques which looks at the overall performance of the company. Through a financial ratio analysis, this portion will look at the specific areas where Ted's financial position can be further enhanced. Lastly, this paper will critically examine whether the financial objectives are in line with the goal the primary goal of shareholder value maximisation.
Financial ratio analysis is a very essential tool in assessing the financial health of a business entity. Financial ratios are grouped into five categories, each showing a different aspect of a company's financial operations. These are profitability ratios, financial leverage ratios, liquidity/solvency ratios, efficiency ratios, and investor ratios.
Profitability ratios measure the ability of the company to generate income from its investments less the costs incurred (Fraser and Orniston 2004). Table 1 shows the computed profitability ratios of Ted Baker Plc during the fiscal years 2006 and 2005 which includes gross profit margin, net profit margin, and return on capital employed. When measured in terms of gross profit margin and ROCE, Ted shows a decline in profitability. This also shows the company's higher costs of goods sold relative to sales. On the other hand, the company's lower ROCE slower growth of income relative to capital employed. However, amidst all these, Ted shows efficiency in allocating costs evidenced on its net profit margin.
Table 1.
Liquidity or solvency ratios are used as measures of the company's ability to finance its short-term obligations by its cash and near cash items (Fraser and Orniston 2004). Table 2 shows the computed liquidity ratios of Ted during the fiscal years 2006 and 2005 which includes current and quick ratios. Generally, the company's liquidity is improving. It should be noted that in both years, all the current assets of the company can more than pay off its current liabilities. However, the large discrepancies between the current and quick ratios indicate that almost half of the current assets are tied up in inventory. This huge stock dilutes the liquidity of Ted Baker Plc.
Table 2.
Working capital ratios are also called efficiency ratios because they reveal the company's ability to manage their working capital efficiently (Fraser and Orniston 2004).. Table 3 shows the computed the working capital efficiency ratios of Ted during the fiscal years 2006 and 2005 which includes stock, debtors, and creditors turnover. The company's stock turnover has improved although sales of merchandises is still slow. Both of the debtors and creditors turnover has declined indicating longer collection of receivables and supplier payment periods.
Table 3.
Financial leverage ratios provide an indication of the long-term solvency of ...Download file to see next pagesRead More
Share:
Tags
Cite this document
(“Financial analysis Essay Example | Topics and Well Written Essays - 2000 words - 1”, n.d.)
Financial analysis Essay Example | Topics and Well Written Essays - 2000 words - 1. Retrieved from https://studentshare.org/miscellaneous/1504785-financial-analysis

CHECK THESE SAMPLES OF Financial analysis

...Climate change Can we imagine an Earth where there are no green mountains, no deep blue seas and no living creatures? No. But a disaster of such magnitude and dimension is looming over Earth. Humans have identified this threat, defined it and given it a name, global warming. This dangerous proposition is based on the truth that even a 5 % increase in the surface temperature on Earth can wipe out life from this beautiful planet. And the temperature is increasing as never before. It was in 1990s that the world began to hear serious warnings on global warming and climate change. The summary for policy makers prepared as part of the first assessment report by Inter-governmental Panel on Climate Change was the first ever in depth... change Can we ...
6 Pages(1500 words)Literature review
sponsored ads
Save Your Time for More Important Things
Let us write or edit the essay on your topic "Financial analysis" with a personal 20% discount.
GRAB THE BEST PAPER

Let us find you another Essay on topic Financial analysis for FREE!