Comments (0)
Add to wishlistDelete from wishlist
Cite this document
Summary
Homer's Achilles was a great hero. When he was born as a mortal, his mother, Thetis, dipped him into the special waters of the river Styx. She did this to make him immortal. Thetis held Achilles by his heel and forgot to wet this heel and this became his weak spot…
Download full paperFile format: .doc, available for editing
HIDE THIS PAPERGRAB THE BEST PAPER94.1% of users find it useful 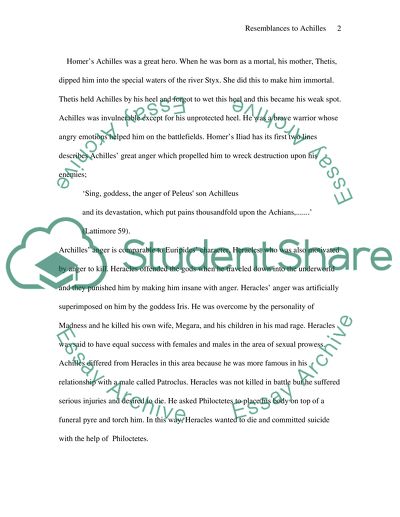 ic characters that resemble Homer's Achilles. Homer's Achilles was a great hero. When he was born as a mortal, his mother, Thetis, dipped him into the special waters of the river Styx. She did this to make him immortal. Thetis held Achilles by his heel and forgot to wet this heel and this became his weak spot. Achilles was invulnerable except for his unprotected heel. He was a brave warrior whose angry emotions helped him on the battlefields. Homer's Iliad has its first two lines describes Achilles' great anger which propelled him to wreck destruction upon his enemies;
'Sing, goddess, the anger of Peleus' son Achilleus
and its devastation, which put pains thousandfold upon the Achians,.......'
(Lattimore 59).
Archilles' anger is comparable to Euripides' character, Heracles, who was also motivated
by anger to kill. Heracles offended the gods when he traveled down into the underworld
and they punished him by making him insane with anger. Heracles' anger was artificially
superimposed on him by the goddess Iris. He was overcome by the personality of
Madness and he killed his own wife, Megara, and his children in his mad rage. Heracles
was said to have equal success with females and males in the area of sexual prowess.
Achilles differed from Heracles in this area because he was more famous in his
relationship with a male called Patroclus. Heracles was not killed in battle but he suffered
serious injuries and desired to die. He asked Philoctetes to place his body on top of a
funeral pyre and torch him. In this way, Heracles wanted to die and committed suicide
with the help of Philoctetes.
Achilles was killed by Paris of Troy who was avenging his brother Hector's death. Paris has been termed a coward in some literature because he took advantage of Archilles' weakest spot and killed him by an arrow to his heel.
Sophocles' Greek character, Philoctetes, resembles Achilles because he was wounded in his foot. His injury did not cure. Philoctetes was about to participate in the Trojan war when he was bitten by a snake on his foot. He suffered great pain and the wound smelled bad. His superior, Odysseus, betrays him and leaves him behind on an island called Lemnos. It seems Philoctetes' has an 'Achilles heel' too because his weak spot on his foot refused to heal. However, Philoctetes, unlike Achilles, does not die from his foot injury. It seems that the pain in his foot was linked to his reception of Heracles' bow. For when Neoptolemus tried to deceive Philoctetes and steal his Heracles' bow, the pain in his foot magnified. Neoptolemus took pity upon him and returned his bow. Philoctetes fought in the Trojan war. As a reward from the gods, his foot was cured of pain, smell and disease.
Antigone was the daughter of Oedipus. She was a brave heroine who tried to bury her slain brother Polyneices, against the orders of Creon, Haemon's father. Her lover, Haemon, defended her actions and committed suicide after her death. Haemon's mother, Eurydice, killed herself because of grief. Creon gives up his life to his enemies. Antigone has died by her own hand while Achilles was killed by his enemy. It seems the feminine Antigone does not resemble Achilles except that they both had great love relationships with their lovers.
I would choose Sophocles' Philoctetes to be the tragic hero who best resembles Homer's Achilles.
Works Cited.
Lattimore, Richard. The Iliad of Homer by Homer. USA: Phoenix Books, 2006. Read More
Share:
Tags
Cite this document
(“Homers Achilles Essay Example | Topics and Well Written Essays - 500 words”, n.d.)
Retrieved from https://studentshare.org/miscellaneous/1504690-homers-achilles

CHECK THESE SAMPLES OF Homers Achilles

The traits of Hector and Achilles

...which Achilles was mistaken to have exercised as it put the lives of his countrymen at risk. This is not true, as a silent acceptance of Agamemnon’s insult would have been an impediment in his glory more than anything. Indeed, Achilles goes one step further and inflicts a curse upon Agamemnon’s army, summoning his mother, the sea-nymph Thetis, to beckon Zeus to demolish the same. This episode is also evidence of a barrage of emotions transpiring at the hands of the great warrior Achilles, which not only demonstrated the superfluous warrior’s spite for the king, insulting him to his face, but also became the advent of a unique emotional spiral that would plague the great man in the...
6 Pages(1500 words)Essay

The Character of Achilles in the Iliad

.... This enhanced feeling of wrath is indisputably stronger than that of a dishonored hero. Therefore, Achilles reconciles with Agamemnon and together with his troops starts slaughtering the warriors of Troja with cruelty. Finally, this wrath makes him want vengeance so much, that when he kills Hector in the end, it appears not enough and he disgraces his body. Of course, it may be argued that Achilles displays many humane feelings and heroic features. For example, his grief over the lost friend and his sympathy towards Priam who, as he finds, resembles him of his own father, are of certain moral significance. At the same time, the fact he fails to clean his soul and personality at the end of the poem, as...
4 Pages(1000 words)Essay

Comparison of Homers and Virgils epics

...of their styles. They use the diction of the highest level and employ different stylistic device like rhetoric, epic similes, and allusions to embellish their story. The literature of classic Greeks and Romans presents these poems as the finest example of their creative genius. In the following lines we will trace some similarities and dissimilarities between Homer’s epics with those of Virgil. Divine Parentage of the heroes Heroes of the epics are unique personalities. They possess the passions of humans but also have dignity of gods. They are mortal beings but their mortality is not common. Their power and bravery are proverbial as is the case with Achilles and Aeneas. In order to put them above...
5 Pages(1250 words)Essay

...Section/# Achilles and Hector: An Examination of Two Foils Whereas Hector and Achilles both share a litany of similarities within Homer’s Iliad, it is the belief of this author that they are portrayed as exquisite foils of one another. Although there are a number of means by which an author could seek to analyze the text and point to key passages and overall evidence with regards to whether or not these characters complement one another or integrate with one another so as to form a stark contrast, the means by which this analysis will undertake to prove such a point is by analyzing the key similarities and differences and then seeking to portray the overall importance of these with...
4 Pages(1000 words)Essay

...sufficient since they can express pleasure or pain and concept of justice and injustice clearly shows that human are political animals (Marietta, 127). The present article intends to compare personalities of Achilles and Odysseus in the light of Aristotle's concept of self- sufficiency. The portrayal of Achilles and Odysseus is a presentation of bie ( wild force) and metis (tact or cleverness). Homer, though pays honor to Achilles which is deserved by his greatness yet in the end the intelligence and endurance of Odysseus triumphs (Clay 96). When we first meet Odysseus, he is sitting on the seashore, desolately lamenting for his island home Ithaca and his wife...
4 Pages(1000 words)Essay

...Like two opposite ends in a spectrum, I believe that St. Augustine and Telemachus in Homer's Odyssey grew up in very different environment. The ways in which they matured into adulthood are poles apart. The Role of Parents With respect to their mothers, St. Augustine was close to his mother, Monica, while growing up. She taught him about the Catholic faith and constantly guided him through his journey for knowledge. He looks up to her for wisdom and such, her teaching indeed was very influential on how St. Augustine grew up to be the man he became to be. On the contrary, Penelope has quite the opposite effect on Telemachus. Unlike Monica to the young Augustine, Penelope did not share any knowledge or wisdom to...
3 Pages(750 words)Essay

Discuss the character of Achilles in Homers Hiad

... 04 March The Character of Achilles in Homer’s Iliad Achilles, king of Myrmidons and the valiant hero of Iliad, is one of the most illustrious characters in this epical saga, whose influence has finally determined the fate of the Greeks in the war. Considered by many as an impulsive person, Achilles is both courageous and wise but he often reacts quite outrageously both with warriors and gods. This characteristic traits seem to have been nourished in him because of his peculiar positioning as a hero who has to lead a war but he knows that he is destined to die in there because of the unique fate assigned to him by the gods, where his glory “walks hand in hand with his doom” (Peterson 2004). Thus, Achilles can be seen as suffering... an...
2 Pages(500 words)Essay

Comparison between odysseus and achilles

...characters with their friends and families have different outcomes. For this reason, despite the fact that Odysseus and Achilles are considered to be the greatest warriors by their people, these individuals are surprisingly diverse in terms of their personalities and the actions ascribed to them. They are, however, similar in certain aspects. They both emerge as heroic figures, like to take part in battle; although Achilles is the more aggressive one, and are sentimental about their crews. In their own right, both off them are heroes. History remembers Achilles as the hero who is quick to cat whereas Odysseus is a more methodical and cunning hero. Therefore, I do not believe that either...
6 Pages(1500 words)Essay

...The Sheald of Achilles INTRODUCTION The Shield of Achilles is a particular shield, which used by Achilles while fighting with Hector. It was extensively described in one of the passages of the book entitled Iliad penned by famous author Homer. The description was that Achilles had lost his armour during the battle and later, Hephaestus provided the shield to Achilles, as a replacement of his armour in order to win the battle (Prezgonzlez 150-162). DISCUSSION The story presented by Homer in his work depicts that a fleet runner named Antilochus sent a messenger to Achilles who was among the...
2 Pages(500 words)Assignment

...﻿ Homer’s Iliad: Achilles Table of Contents I. Introduction 3 II. Exploring Achilles’ Existential Crisis 3 III. The Nature of Achilles’ Relationships with Other Warriors and Gods 5 IV. Achilles’ Realizations Away from Battle 6 V. Discussing Achilles as Literature’s First Real/True Individual, First Problem Character in the West 7 VI. Achilles’ Behavior – Responses by Readers. What Repels and Keeps Sympathies Towards Achilles 9 Works Cited 10 I. Introduction This paper explores Achilles’ character in Homer’s ‘Iliad’,...
9 Pages(2250 words)Assignment
sponsored ads
Save Your Time for More Important Things
Let us write or edit the essay on your topic "Homers Achilles" with a personal 20% discount.
GRAB THE BEST PAPER

Let us find you another Essay on topic Homers Achilles for FREE!