Budgetary planning and control and the evaluation of performance - Essay Example

Comments (0)
Add to wishlistDelete from wishlist
Cite this document
Summary
Budgeting is a key component in the management process. Understanding what a budget is and the role budgeting plays is essential to the proper exercise of a manager's responsibilities, which include planning, organizing and staffing, directing or leading, and controlling…
Download full paperFile format: .doc, available for editing
HIDE THIS PAPERGRAB THE BEST PAPER92.8% of users find it useful 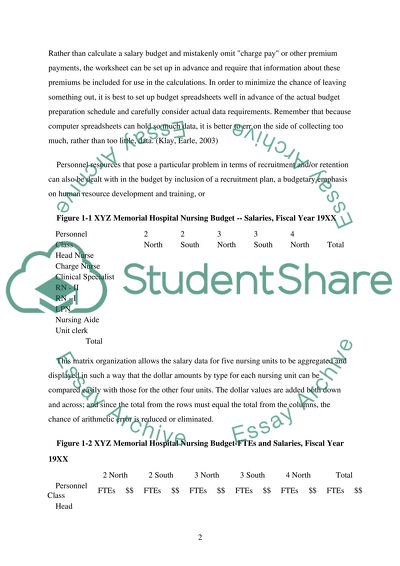 Download file to see previous pages It represents a plan for the future expressed in formal, measurable terms. (Botner, Stanley, 1991).
To be helpful, a budget must be prepared in sufficient detail to inform all levels of management of the exact expectations. It is not sufficient to establish a personnel budget for an institution and limit the detail to a statement of the overall number of employees. This serves no purpose except, perhaps, as part of a summary. Rather, a personnel budget should detail the quantities and types of full-time equivalents by department or cost center, perhaps by shift or by workstation. It should detail the salaries to be paid and the components, including routine, overtime, shift pay, cost of living or merit increases, and so on. All positions -- vacant and otherwise -- should be included in the budget. To assemble the quantity of data necessary to support a detailed plan, a matrix organization of rows and columns is essential. The matrix allows a significant amount of information to be displayed in an orderly manner and a limited amount of space. If organized properly, interrelationships can easily be seen, the data can be viewed and understood quickly, and the chance of arithmetic error can be reduced or eliminated. Figures 1-1 and 1-2 display two such matrix-style worksheets for a nursing department's personnel budget in computer spreadsheet form.
One other advantage of a matrix-style worksheet is that it can help guard against errors of omission by specifying certain data to be collected in a particular set of columns or rows. Rather than calculate a salary budget and mistakenly omit "charge pay" or other premium payments, the worksheet can be set up in advance and require that information about these premiums be included for use in the calculations. In order to minimize the chance of leaving something out, it is best to set up budget spreadsheets well in advance of the actual budget preparation schedule and carefully consider actual data requirements. Remember that because computer spreadsheets can hold so much data, it is better to err on the side of collecting too much, rather than too little, data. (Klay, Earle, 2003)
Personnel resources that pose a particular problem in terms of recruitment and/or retention can also be dealt with in the budget by inclusion of a recruitment plan, a budgetary emphasis on human resource development and training, or
Figure 1-1 XYZ Memorial Hospital Nursing Budget -- Salaries, Fiscal Year 19XX
Personnel
2
2
3
3
4
Class
North
South
North
South
North
Total
Head Nurse
Charge Nurse
Clinical Specialist
RN - II
RN - I
LPN
Nursing Aide
Unit clerk
Total
This matrix organization allows the salary data for five nursing units to be aggregated and displayed in such a way that the dollar amounts by type for each nursing unit can be compared easily with those for the other four units. The dollar values are added both down and across; and since the total from the rows must equal the total from the columns, the chance of arithmetic error is reduced or eliminated.
Figure 1-2 XYZ Memorial Hospital Nursing Budget-FTEs and Salaries, Fiscal ...Download file to see next pagesRead More
Share:
Tags
Cite this document
(“Budgetary planning and control and the evaluation of performance Essay”, n.d.)
Budgetary planning and control and the evaluation of performance Essay. Retrieved from https://studentshare.org/miscellaneous/1504648-budgetary-planning-and-control-and-the-evaluation-of-performance

“Budgetary Planning and Control and the Evaluation of Performance Essay”, n.d. https://studentshare.org/miscellaneous/1504648-budgetary-planning-and-control-and-the-evaluation-of-performance.
Comments (0)
Click to create a comment or rate a document

Many people take the words “obese” and “overweight” to mean the same thing. Actually, they are not. Overweight refers to an increased body weight (not necessarily increase in body fat) relative to height, above that which is generally accepted as a standard. (Capella University, 2004). Obesity, however, is “defined simply as...

... charge-offs plus PLL and recoveries)/Total loans and leases). To evaluate the operational efficiency or cost control of the bank two ratios of Fixed occupancy expenses/Total expenses and Wages and salaries/Total expenses are calculated. The temporary investment ratio and volatility-liability dependency ratios are calculated to measure the liquidity of the bank. The idea of measuring these ratios is to determine the extent to which the bank has used ‘hot’ money to fund its riskiest assets. Apart from that, the other financial ratios that can be used to evaluate the performance of the bank may include tax rate (total taxes paid/Net income before taxes) and Dollar gap ratio (Interest rate sensitive assets – Interest rate sensitive...
7 Pages(1750 words)Case Study

... for each of the firm. If they both play L then the profits would be half of what they would earn if they do not change. Part B The purpose of this essay is to critically analyze the extent to which the efficiency and equity considerations should be taken into account in the Structure-Conduct-Performance Model when it comes to deciding policies for the mergers between large firms. Firstly, the paper talks briefly about the Structure-Conduct-Performance Model and then moves onto discuss the importance of equity and efficiency in policy making for mergers. Introduction According to the Structure-Conduct-Performance Model, the performance of any industry depends on the firms’ conducts in the industry. The Conduct of the firms in turn depends...
6 Pages(1500 words)Essay
sponsored ads
Save Your Time for More Important Things
Let us write or edit the essay on your topic "Budgetary planning and control and the evaluation of performance" with a personal 20% discount.
GRAB THE BEST PAPER

Let us find you another Essay on topic Budgetary planning and control and the evaluation of performance for FREE!