Comments (0)
Add to wishlistDelete from wishlist
Cite this document
Summary
Politics are a dirty business. People will often say whatever they think people want to hear in order to get elected. Once in office, we tend to see candidate's promises melt away into wishy-washy ideas that may or may not actually take tangible form. This often happens in politics…
Download full paperFile format: .doc, available for editing
HIDE THIS PAPERGRAB THE BEST PAPER96.9% of users find it useful 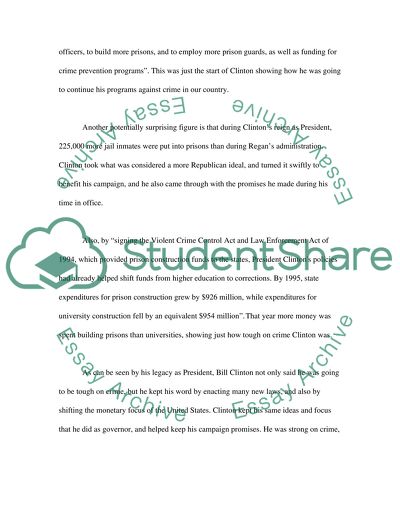 Politics are a dirty business. People will often say whatever they think people want to hear in order to get elected. Once in office, we tend to see candidate's promises melt away into wishy-washy ideas that may or may not actually take tangible form. This often happens in politics. However after reading the article I would have to say I disagree, and that President Clinton really did make some changes to the crime system in America.
Previous to the election, Clinton has showed just how tough on crime he was. He had presided over four executions during his reign as governor, and gave the voting public the impression that he was truly tough on crime. He successfully stole the "War on Crime" idea and added it into his campaign, and rode it all the way to victory in the White House.
However, Clinton soon put his money where his mouth was, and showed just how tough on crime he was going to be during his Presidency. Throughout the entirety of Clinton's administration he "consistently supported increased penalties and additional prison construction. The Violent Crime Control and Law Enforcement Act of 1994 provided state and municipal governments with $30 billion to add 100,000 new police officers, to build more prisons, and to employ more prison guards, as well as funding for crime prevention programs". This was just the start of Clinton showing how he was going to continue his programs against crime in our country.
Another potentially surprising figure is that during Clinton's reign as President, 225,000 more jail inmates were put into prisons than during Regan's administration. Clinton took what was considered a more Republican ideal, and turned it swiftly to benefit his campaign, and he also came through with the promises he made during his time in office.
Also, by "signing the Violent Crime Control Act and Law Enforcement Act of 1994, which provided prison construction funds to the states, President Clinton's policies had already helped shift funds from higher education to corrections. By 1995, state expenditures for prison construction grew by $926 million, while expenditures for university construction fell by an equivalent $954 million". That year more money was spent building prisons than universities, showing just how tough on crime Clinton was.
As can be seen by his legacy as President, Bill Clinton not only said he was going to be tough on crime, but he kept his word by enacting many new laws, and also by shifting the monetary focus of the United States. Clinton kept his same ideas and focus that he did as governor, and helped keep his campaign promises. He was strong on crime, just like he said, and made sure to not simply flash words; he delivered substance behind his promises. Read More
Share:
Tags
Cite this document
(“President Clinton's Crime Policy Essay Example | Topics and Well Written Essays - 500 words”, n.d.)
President Clinton's Crime Policy Essay Example | Topics and Well Written Essays - 500 words. Retrieved from https://studentshare.org/miscellaneous/1504613-president-clintons-crime-policy

They, therefore, believe that internal and external factors affect the chances of a person being subject to a crime. The situation at which a person commits a crime also forms the basis of the determinist approach of causes of crimes.
Several theories elaborate on the factors that dispose of different people toward crimes. The classical theory explains that crimes occur when their benefits outdo the costs or consequences of the crime. The theory of Routine Activities suggests that a crime likely occurs if a motivated offender finds an attractive target and no appropriate guardianship in place. Various biological factors also influence the causes of crimes as evident in the discussion.
One of the major assumptions of the...
8 Pages(2000 words)Term Paper
sponsored ads
Save Your Time for More Important Things
Let us write or edit the essay on your topic "President Clinton's Crime Policy" with a personal 20% discount.
GRAB THE BEST PAPER

Let us find you another Essay on topic President Clinton's Crime Policy for FREE!