Comments (0)
Add to wishlistDelete from wishlist
Cite this document
Summary
Going to war is not simply deploying soldiers and launching missiles to the perceived enemy. It is also about "rallying the masses around the public" or making sure that the public supports the war effort. This is where the Media, particularly that on screen, play a crucial role in portraying conflicts…
Download full paperFile format: .doc, available for editing
HIDE THIS PAPERGRAB THE BEST PAPER98% of users find it useful 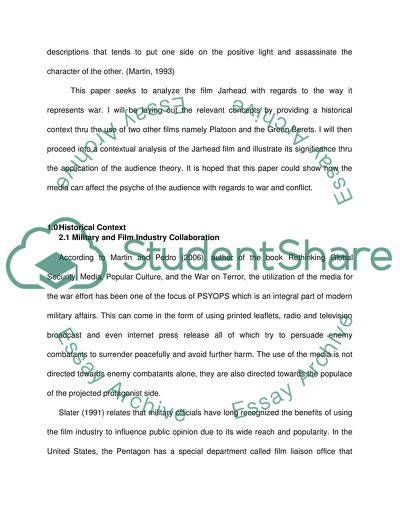 Extract of sample "Representation of war in media"

Download file to see previous pages The media is said to assume a dichotomous coverage of the war where the conflicting sides are portrayed either as good/evil, innocent/guilty, heroic/despotic, united/fragmented and other descriptions that tends to put one side on the positive light and assassinate the character of the other. (Martin, 1993)
This paper seeks to analyze the film Jarhead with regards to the way it represents war. I will be laying out the relevant concepts by providing a historical context thru the use of two other films namely Platoon and the Green Berets. I will then proceed into a contextual analysis of the Jarhead film and illustrate its significance thru the application of the audience theory. It is hoped that this paper could show how the media can affect the psyche of the audience with regards to war and conflict.
According to Martin and Pedro (2006), author of the book Rethinking Global Security: Media, Popular Culture, and the War on Terror, the utilization of the media for the war effort has been one of the focus of PSYOPS which is an integral part of modern military affairs. This can come in the form of using printed leaflets, radio and television broadcast and even internet press release all of which try to persuade enemy combatants to surrender peacefully and avoid further harm. The use of the media is not directed towards enemy combatants alone, they are also directed towards the populace of the projected protagonist side.
Slater (1991) relates that military officials have long recognized the benefits of using the film industry to influence public opinion due to its wide reach and popularity. In the United States, the Pentagon has a special department called film liaison office that works with Hollywood in making war movies. The relationship is as follows: Hollywood gets to use military equipment such as tanks, helicopters, aircraft carriers, troops and even live munitions for free. In return, the Pentagon is given the right to approve the script and edit it so that the U.S. military is portrayed in a positive light while the enemies are depicted as evil and abusive. The relationship has other uses as well such as propaganda for recruitment. Martin and Pedro (2006) observe that the military "know that when positive images are portrayed in movies and television shows, they see huge spikes in recruitment. The military is really pressing to get into these pictures".
2.2 The Green Beret and the Vietnam War
One perfect example of how the military establishment and the film industry worked together for propaganda purposes was in the film The Green Berets which was a cinematic portrayal of the lives of U.S. soldiers during the Vietnam War. The cinematic treatment of the Vietnam War took time to develop because American society was very sensitive about the discussing the war which created deep divisions, exhausted the treasury and sacrificed many of its soldiers but ultimately resulted to their defeat in spite of numerous successful military campaigns. It does not mean, however, that there was no film produced during the war. (Studlar and Desser, 1990)
The Green Berets (1968) was the only film addressing the Vietnam War produced while the war occurred. The film was directed by and starred John Wayne, ...Download file to see next pagesRead More
Share:
Tags
Cite this document
(“Representation of war in media Essay Example | Topics and Well Written Essays - 3000 words”, n.d.)
Retrieved from https://studentshare.org/miscellaneous/1504566-representation-of-war-in-media

CHECK THESE SAMPLES OF Representation of war in media

New and complex issues have arisen which demanded fresh understanding and handling of cases involved them. This has resulted in the enhanced development of specialized laws e.g. cyber laws and interpretation of those laws. The same is true with Media Laws. Media has developed much in the last half-century. As it evolved as a profession and more people started to join it, there arose the levels of money involved in it. With this grew the contractual obligations on the parts of parties and concerned laws e.g. patent laws, privacy laws, and copyrights laws, etc. also started to play their parts. With these issues, the role of law in the media industry also reached a new height.
Mathew Fisher, the appellant, joined a band with Mr...
6 Pages(1500 words)Assignment
sponsored ads
Save Your Time for More Important Things
Let us write or edit the essay on your topic "Representation of war in media" with a personal 20% discount.
GRAB THE BEST PAPER

Let us find you another Essay on topic Representation of war in media for FREE!