Comments (0)
Add to wishlistDelete from wishlist
Cite this document
Summary
The logo represents the name of the company and explicitly explains what type of business it is involved into though its name and the graphics. The name of mugs contains a mug instead of a 'u' and similarly the name cups have the picture of a cup instead of a 'u'…
Download full paperFile format: .doc, available for editing
HIDE THIS PAPERGRAB THE BEST PAPER95.1% of users find it useful 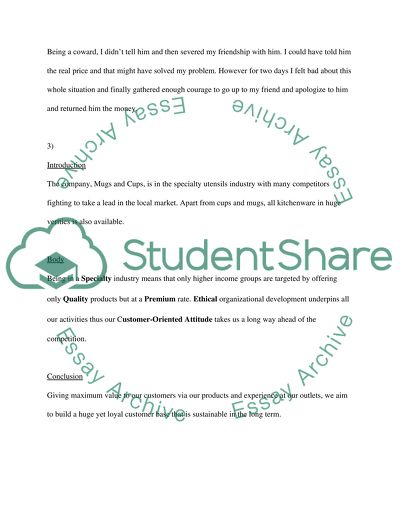 Download file to see previous pages My problem came when we were supposed to purchase chemistry books for our new class. Since I lived near to the book store, my best friend asked me to purchase one for him too. I bought two books, one for myself and the other for my friend at $10 each. The next day I gave the book to my pal and told him that the book cost $15. I told him this price on the presumption that I can keep a $5 commission for getting him the book. My friend unknowingly paid me $15 and that was the end of matters when a day later my friend confronted me about the real price of the book. Feeling ashamed of myself I lied and told him it was for $15. Somehow he had found out the real price from somewhere and had come to me to ask for an explanation. Being a coward, I didn't tell him and then severed my friendship with him. I could have told him the real price and that might have solved my problem. However for two days I felt bad about this whole situation and finally gathered enough courage to go up to my friend and apologize to him and returned him the money.
The company, Mugs and Cups, is in the specialty utensils industry with many competitors fighting to take a lead in the local market. Apart from cups and mugs, all kitchenware in huge verities is also available.
Being in a Specialty industry means that only higher income groups are targeted by offering only Quality products but at a Premium rate. Ethical organizational development underpins all our activities thus our Customer-Oriented Attitude takes us a long way ahead of the competition.
Conclusion
Giving maximum value to our customers via our products and experience at our outlets, we aim to build a huge yet loyal customer base that is sustainable in the long term.
1)
Introduction
Our main competitor at the moment is coffee giant, Starbucks. Being the market leader, Starbucks business model has earned them huge revenues while taking out smaller coffee houses in the way. Crystal Mugs is a small and young company, but it is giving Starbucks a run for their lives in certain specific areas in New York City.
(Source: www.starbucks.com)
Body
The Starbucks brand name is known globally and it is recognized by its logo by people of all ages. This is mainly due to high budgets for advertisements and marketing strategies. Being a global chain, they have the financial backing and the liberty to open a store in any area they want and they do this well with their blanketing strategy. Being located in every few blocks, they have built a walking to store culture for the customers and by giving them the 'Starbucks Experience', they have won the hearts of many.
Conclusion
The size of operations of Starbucks is so huge that it can wipe away any competitor in a jiffy. With huge expenditures on human resources, strategies and marketing etc., Starbucks is our most threatening competitor. But with increased vigor and passion, we at Crystal Mugs offer a difference for our valued customers.
2)
Introduction
With intense competition at our heels, we needed to have a strategic location so that competition could be beaten even with their reputation. The location is extremely important for every business which should be close to its target market.
Body
Located in New York NY, just around the Washington Park Square on the Greene Street, so that people who come for a hang out at the park can take a quick stop at Crystal Mugs for Coffee. We even cater to deliveries ...Download file to see next pagesRead More
Share:
Tags
Cite this document
(“Business Communications Case Study Example | Topics and Well Written Essays - 1750 words”, n.d.)
Retrieved from https://studentshare.org/miscellaneous/1504490-business-communications-case-study

After the emergence of new business technologies, the overall business management has greatly improved. Now we have better tools and techniques business management. The use of modern and up-to-date technology in the business always offers better support to the business in managing and organizing the organization’s resources. However, the implementation of information technology at business is a challenging task that requires extensive resources, knowledge, and planning. Club IT nightclub aimed to implement a new a...
8 Pages(2000 words)Case Study

... than fifty academic institutions in the UK, USA, and Canada immediately terminated contracts with the Coca-Cola that was a major blow for the company (Srivastava, 2008). However, most of the critics (MarketLine, 2005) argue that this showed business profit and continuity as the foremost priority of Coca-Cola, rather than ethical or sustainable impact on the community or stakeholders associated with the company. Besides over-extraction and pollution, the report (Srivastava, 2009) pointed out the third issue that the company was not even following its own policies and procedures of the waste management that became a major risk factor of various diseases in hundreds of families residing near the bottling plant (Flex news, 2008). Lastly...
10 Pages(2500 words)Case Study
sponsored ads
Save Your Time for More Important Things
Let us write or edit the case study on your topic "Business Communications Case Study" with a personal 20% discount.
GRAB THE BEST PAPER

Let us find you another Case Study on topic Business Communications Case Study for FREE!