Comments (0)
Add to wishlistDelete from wishlist
Cite this document
Summary
Washington, D.C., March 17, 2010-Only 20 of 128 economies have equal legal rights for men and women in several important areas for entrepreneurs and workers, according to a new World Bank Group report, Women, Business and the Law 2010. Inequality occurs across all regions and income levels…
Download full paperFile format: .doc, available for editing
HIDE THIS PAPERGRAB THE BEST PAPER91.5% of users find it useful 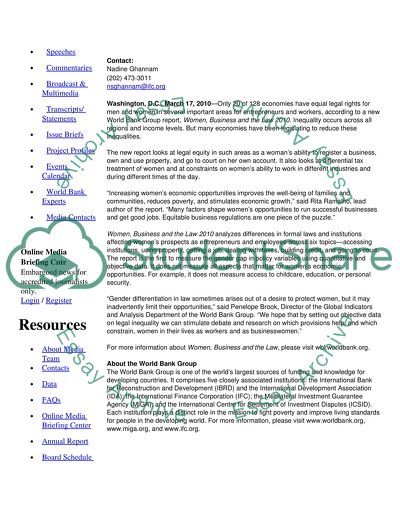 Extract of sample "Unequal Rules for Women Entrepreneurs and Workers"

Home -Site Map -Index -FAQs -Contact Us About Countries Data & Research Learning News Projects & Operations Publications Topics Top of Form
Search
Bottom of Form
Home > News > Unequal Rules for Women Entrepreneurs an...
Top of Form
Bottom of Form
-
-Espaol
-
-Franais
-P
All News
Press Releases
Feature Stories
Development News Daily
Loans & Credits
Speeches
Commentaries
Broadcast & Multimedia
Transcripts/ Statements
Issue Briefs
Project Profiles
Events Calendar
World Bank Experts
Media Contacts
Online Media Briefing Cntr
Embargoed news for accredited journalists only.
Login / Register
Resources
About Media Team
Contacts
Data
FAQs
Online Media Briefing Center
Annual Report
Board Schedule & Minutes
President Zoellick
Unequal Rules for Women Entrepreneurs and Workers Across the World, New Report Finds
Available in:Franais, , , , Espaol
Press Release No:2010/299/IFC
Contact:
Nadine Ghannam
(202) 473-3011
nsghannam@ifc.org
Washington, D.C., March 17, 2010-Only 20 of 128 economies have equal legal rights for men and women in several important areas for entrepreneurs and workers, according to a new World Bank Group report, Women, Business and the Law 2010. Inequality occurs across all regions and income levels. But many economies have been legislating to reduce these inequalities.
The new report looks at legal equity in such areas as a woman's ability to register a business, own and use property, and go to court on her own account. It also looks at differential tax treatment of women and at constraints on women's ability to work in different industries and during different times of the day.
"Increasing women's economic opportunities improves the well-being of families and communities, reduces poverty, and stimulates economic growth," said Rita Ramalho, lead author of the report. "Many factors shape women's opportunities to run successful businesses and get good jobs. Equitable business regulations are one piece of the puzzle."
Women, Business and the Law2010analyzes differences in formal laws and institutions affecting women's prospects as entrepreneurs and employees across six topics-accessing institutions, using property, getting a job, dealing with taxes, building credit, and going to court. The report is the first to measure the gender gap in policy variables using quantitative and objective data. It does not measure all aspects that matter for women's economic opportunities. For example, it does not measure access to childcare, education, or personal security.
"Gender differentiation in law sometimes arises out of a desire to protect women, but it may inadvertently limit their opportunities," said Penelope Brook, Director of the Global Indicators and Analysis Department of the World Bank Group. "We hope that by setting out objective data on legal inequality we can stimulate debate and research on which provisions help, and which constrain, women in their lives as workers and as businesswomen."
For more information about Women, Business and the Law, please visit wbl.worldbank.org.
About the World Bank Group
The World Bank Group is one of the world's largest sources of funding and knowledge for developing countries. It comprises five closely associated institutions: the International Bank for Reconstruction and Development (IBRD) and the International Development Association (IDA); the International Finance Corporation (IFC); the Multilateral Investment Guarantee Agency (MIGA); and the International Centre for Settlement of Investment Disputes (ICSID). Each institution plays a distinct role in the mission to fight poverty and improve living standards for people in the developing world. For more information, please visit www.worldbank.org, www.miga.org, and www.ifc.org.
Permanent URL for this page: http://go.worldbank.org/8TFU7HRLE0
Home |
Site Map |
Index |
FAQs |
Contact Us |
Search |
RSS
2010 The World Bank Group, All Rights Reserved. Legal Read More
Share:
Tags
Cite this document
(“Unequal Rules for Women Entrepreneurs and Workers Research Paper”, n.d.)
Unequal Rules for Women Entrepreneurs and Workers Research Paper. Retrieved from https://studentshare.org/miscellaneous/1504401-unequal-rules-for-women-entrepreneurs-and-workers

CHECK THESE SAMPLES OF Unequal Rules for Women Entrepreneurs and Workers

The circumstances under which women proceed to criminal actions have been extensively studied in the literature. Towards this direction, the study of Radosh (2002) revealed that ‘the common life experience of prior physical or sexual abuse is among the most consistent recurring themes among incarcerated women; for these wome...

As far as religious practices are concerned, the role of women in Islam and the Wicca religion is very impor...

In the story, one symbolism used to represent the sensitivity and weakness of women is the chrysanthemums themselves. The chrysanthemums are described as having stems that are too small and easy for Elisa’s energy, and this is basically the same as her character. As a weak and sensitive woman, she easily becomes prey to the kindness displayed by the stranger. Just like the chrysanthemums that need to be constantly transplanted and regularly cut, women like Elisa easily believe what men tell them although this is not necessarily true. Moreover, the chrysanthemums are somehow ridiculed by Harvey when he tells Elisa, “Some of those yellow chrysanthemums you had this year were ten inches across…I wish you’d wo...
7 Pages(1750 words)Literature review
sponsored ads
Save Your Time for More Important Things
Let us write or edit the research paper on your topic "Unequal Rules for Women Entrepreneurs and Workers" with a personal 20% discount.
GRAB THE BEST PAPER

Let us find you another Research Paper on topic Unequal Rules for Women Entrepreneurs and Workers for FREE!