Comments (0)
Add to wishlistDelete from wishlist
Cite this document
Summary
Until 20th century most of the countries were under colonial rule, they were annexed into the colonial empire. The national movement or the movement for independence was a part of national resurgence. This annexed all aspects of national life, religions, and social educational, cultural and economy…
Download full paperFile format: .doc, available for editing
HIDE THIS PAPERGRAB THE BEST PAPER92.3% of users find it useful 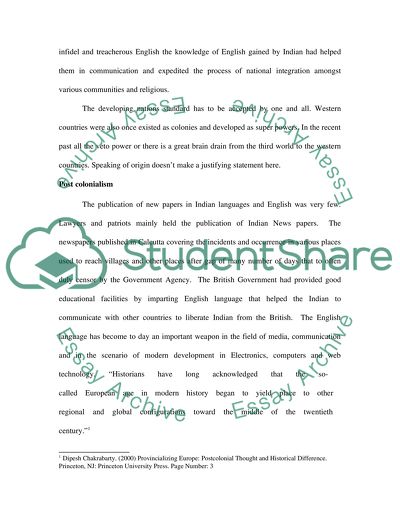 Download file to see previous pages Canning brought out peace allover India by dividing the territories into two. The East India Company ruled one and Indian princes who owed faith to the East India Company ruled the rest. The Indians who knew the antecedents of the East India Company were skeptical about the temporary peace.
In 1857 during summer, British domination in India was shaken up by revolt of sepoy mutiny or the First war of Independence by Indian soldiers. The revolt of Indian soldiers in the year 1857 was radically a different that of other revolts taken place in the years 1806 at Vellore, Bengal in 1842 etc., The British soldiers were killed by the Indian soldiers and marched to Delhi in the year 1857. They declared Bahadur Shaw, Mogul Emperor as the Emperor of India in 1857. Bahadur Shaw issued a proclamations asking the people of India, Hindus and Muslims alike-to end the tyranny and oppression, the infidel and treacherous English the knowledge of English gained by Indian had helped them in communication and expedited the process of national integration amongst various communities and religious.
The developing nations standard has to be accepted by one and all. Western countries were also once existed as colonies and developed as super powers. In the recent past all the veto power or there is a great brain drain from the third world to the western countries. Speaking of origin doesn't make a justifying statement here.
Post colonialism
The publication of new papers in Indian languages and English was very few. Lawyers and patriots mainly held the publication of Indian News papers. The newspapers published in Calcutta covering the incidents and occurrence in various places used to reach villages and other places after gap of many number of days that to often duly censor by the Government Agency. The British Government had provided good educational facilities by imparting English language that helped the Indian to communicate with other countries to liberate Indian from the British. The English language has become to day an important weapon in the field of media, communication and in the scenario of modern development in Electronics, computers and web technology. "Historians have long acknowledged that the so-
called European age in modern history began to yield place to other
regional and global configurations toward the middle of the twentieth
century."1
In the modern society due to advancement of technology in the fields of electronics, communication, Radio, TV, communication satellites, the media is now able to transmit or send news and messages within a very short time. The people are now in position to see, read and talk directly to the other side through videoconferences. Messages can be sent through e-mails to anywhere within five seconds once it set in motion.
The worldwide computer network is the backbone of IT revolution. This network was able to work when special cables, and telephone lines and wireless measures are installed for quick delivery of information from one place to the other irrespective of distance. Today, the media can acquire any form of information in digital format. Modern techniques allow powerful ways and us to use images in media very effectively. The image information is useful in medical treatment also. The media is able to get even geographical information systems through remote sensing and image processing helps them to find out details of very small remote ...Download file to see next pagesRead More
Share:
Tags
Cite this document
(“Postcolonial Society Essay Example | Topics and Well Written Essays - 1500 words”, n.d.)
Postcolonial Society Essay Example | Topics and Well Written Essays - 1500 words. Retrieved from https://studentshare.org/miscellaneous/1504379-postcolonial-society

CHECK THESE SAMPLES OF Postcolonial Society

Morrison scrutinizes the community with its internal conflict between the rising middle class and the lower classes but also points out its responsibility in the main character’s downfall. In fact, through the character of Pecola Breedlove, an 11-year-old girl who struggles to get accepted in her community because of her perceived standard of beauty, Morrison exposes the drama about the concept of beauty in the American society. Indeed, Pecola’s longing for blue eyes reflects her understanding of beauty according to white principles and features that pose a serious self-esteem problem for African Americans. This statement exposes the problem:
Morrison addresses the instability in the black family that has dire con...
15 Pages(3750 words)Book Report/Review
sponsored ads
Save Your Time for More Important Things
Let us write or edit the essay on your topic "Postcolonial Society" with a personal 20% discount.
GRAB THE BEST PAPER

Let us find you another Essay on topic Postcolonial Society for FREE!