Intelligence and the Concept of G - Essay Example

Comments (0)
Add to wishlistDelete from wishlist
Cite this document
Summary
If we were to look in any diction we would see that intelligence is defined as "the capacity for learning, reasoning, understanding and similar forms of mental activity" ("Intelligence" 2006, 1). This definition is, however, incomplete. Although it tells us, more or less, what intelligence does, it does not explain the inter-workings of intelligence - the why This very question prompted Charles Spearman at the turn of the 20th century to investigate exactly what intelligence is and how it can be measured.
…
Download full paperFile format: .doc, available for editing
HIDE THIS PAPERGRAB THE BEST PAPER97.2% of users find it useful 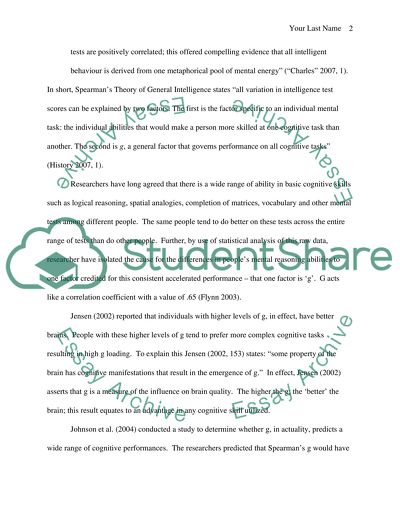 Extract of sample "Intelligence and the Concept of G"

Download file to see previous pages On his road to achieve this Spearman developed Factor Analysis a statistical analysis method to determine if there were correlations between independent factors. In 1904, Spearman published "General Intelligence, Objectively Measured and Observed" in which the first scientific definition of intelligence was put forth. According to Spearman,
intelligent behaviour is generated by a single, unitary quality within the human mind or brain. Spearman derived this theoretical entity, called the general factor, or simply g, through a new statistical technique that analyzed the correlations among a set of variables. This technique, called factor analysis, demonstrated that scores on all mental tests are positively correlated; this offered compelling evidence that all intelligent behaviour is derived from one metaphorical pool of mental energy" ("Charles" 2007, 1).
In short, Spearman's Theory of General Intelligence states "all variation in intelligence test scores can be explained by two factors. The first is the factor specific to an individual mental task: the individual abilities that would make a person more skilled at one cognitive task than another. The second is g, a general factor that governs performance on all cognitive tasks" (History 2007, 1).
Researchers have long agreed that there is a wide range of ability in basic cognitive skills such as logical reasoning, spatial analogies, completion of matrices, vocabulary and other mental tests among different people. The same people tend to do better on these tests across the entire range of tests than do other people. Further, by use of statistical analysis of this raw data, researcher have isolated the cause for the differences in people's mental reasoning abilities to one factor credited for this consistent accelerated performance - that one factor is 'g'. G acts like a correlation coefficient with a value of .65 (Flynn 2003).
Jensen (2002) reported that individuals with higher levels of g, in effect, have better brains. People with these higher levels of g tend to prefer more complex cognitive tasks resulting in high g loading. To explain this Jensen (2002, 153) states: "some property of the brain has cognitive manifestations that result in the emergence of g." In effect, Jensen (2002) asserts that g is a measure of the influence on brain quality. The higher the g; the 'better' the brain; this result equates to an advantage in any cognitive skill utilized.
Johnson et al. (2004) conducted a study to determine whether g, in actuality, predicts a wide range of cognitive performances. The researchers predicted that Spearman's g would have a strong correlation on a diverse set of abilities. The empirical evidence proving the existence of g is well documented. However, there remains some controversy in that "the social implications of the existence of measurable individual differences in a personal characteristic that is highly predictive of a broad range of life outcomes" (Johnson et al. 2004, 96). The researchers assert that regardless of the battery of tests utilized to measure g, the results should be uniform across various test batteries. If, in fact, g varies across these different kinds of test ...Download file to see next pagesRead More
Share:
Tags
Cite this document
(“Intelligence and the Concept of G Essay Example | Topics and Well Written Essays - 1500 words”, n.d.)
Intelligence and the Concept of G Essay Example | Topics and Well Written Essays - 1500 words. Retrieved from https://studentshare.org/miscellaneous/1504364-intelligence-and-the-concept-of-g

“Intelligence and the Concept of G Essay Example | Topics and Well Written Essays - 1500 Words”, n.d. https://studentshare.org/miscellaneous/1504364-intelligence-and-the-concept-of-g.
Comments (0)
Click to create a comment or rate a document

CHECK THESE SAMPLES OF Intelligence and the Concept of G

These verses express the importance of karma in guiding the Buddhists in th...
6 Pages(1500 words)Assignment
sponsored ads
Save Your Time for More Important Things
Let us write or edit the essay on your topic "Intelligence and the Concept of G" with a personal 20% discount.
GRAB THE BEST PAPER

Let us find you another Essay on topic Intelligence and the Concept of G for FREE!