Comments (0)
Add to wishlistDelete from wishlist
Cite this document
Summary
The art of communication has been the most crucial trait among the qualities of a successful person in this modern world. Even in the ancient age the behaviour and communication played a vital role in making the civilization prosperous and rich. May be by communication we do not always mean speech or action; even the silence at the appropriate time can communicate many things…
Download full paperFile format: .doc, available for editing
HIDE THIS PAPERGRAB THE BEST PAPER97.8% of users find it useful 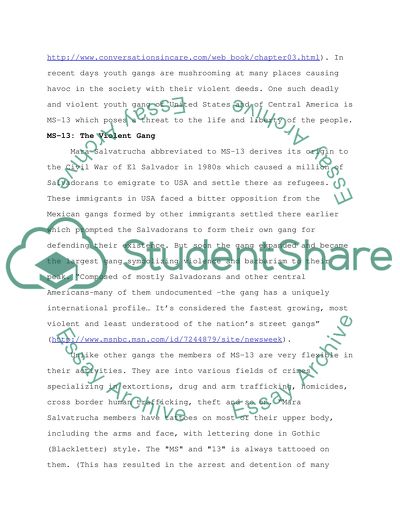 Download file to see previous pages This radical change in this field caused the mankind inviting many problems as well as solutions to deal with them. Appropriate communication during the time of crisis plays a pivotal role to manage the situation effectively. As at the time of crisis the emotions are at their highest level because of stress which often makes people behave in an erratic way. Confusion creeps in their mind to manage the crisis and at that time effective communication skills comes to their rescue. Crisis situations may vary in their nature such as a disastrous situation due to a natural calamity or a terrorist attack or even violence caused by the street gangs and many others. All these situations demands prompt actions which in turn can lead to wrong moves. "Adequate coping skills along with other balancing factors, such as realistic perception of the event and social support can help minimize overreaction"(Radziewicz, http://www.conversationsincare.com/web_book/chapter03.html). In recent days youth gangs are mushrooming at many places causing havoc in the society with their violent deeds. One such deadly and violent youth gang of United States and of Central America is MS-13 which poses a threat to the life and liberty of the people.
Mara Salvatrucha abbreviated to MS-13 derives its origin to the Civil War of El Salvador in 1980s which caused a million of Salvadorans to emigrate to USA and settle there as refugees. These immigrants in USA faced a bitter opposition from the Mexican gangs formed by other immigrants settled there earlier which prompted the Salvadorans to form their own gang for defending their existence. But soon the gang expanded and became the largest gang symbolizing violence and barbarism to their peak. "Composed of mostly Salvadorans and other central Americans-many of them undocumented -the gang has a uniquely international profile It's considered the fastest growing, most violent and least understood of the nation's street gangs" (http://www.msnbc.msn.com/id/7244879/site/newsweek).
Unlike other gangs the members of MS-13 are very flexible in their activities. They are into various fields of crimes specializing in extortions, drug and arm trafficking, homicides, cross border human trafficking, theft and so on. "Mara Salvatrucha members have tattoes on most of their upper body, including the arms and face, with lettering done in Gothic (Blackletter) style. The "MS" and "13" is always tattooed on them. (This has resulted in the arrest and detention of many people, first in Honduras then in El Salvador for illicit association based entirely on the fact that they are wearing tattoos associated with gang membership)
(http://en.wikipedia.org/wiki/Mara_Salvatrucha).
The members of MS-13 are relatively fearless compared to other gangs and shows zero tolerance to the persons who became informant to the cops about their misdeeds. Even they act defiantly without being intimidated by the law enforcement officials easily. The members who abandons the gang is brutally killed by other active members. They impose rent on the people in the locality in which they live in lieu of guarranty of the security of the locals from the threats of other gangs. They are quite adept at using exlosives, firearms and grenades. Having been trained in guerilla warfare the MS-13 members frequently change their places ...Download file to see next pagesRead More
Share:
Tags
Cite this document
(“Crisis Communications Paper on MS13 Gang Violence Essay”, n.d.)
Crisis Communications Paper on MS13 Gang Violence Essay. Retrieved from https://studentshare.org/miscellaneous/1504251-crisis-communications-paper-on-ms13-gang-violence

The idea that masculinity is synonymous with power transcends the times.5 At least from a purely feminist perspective power over women and children has always been essential for maintaining the gender gap in which men are superior to women.6 Anthony Whitehead writes that:
This concept of masculinity goes back to Victorian times and rapidly developed into an ideology that recognized “unity and power of men over women” as the hierarchal structure within “patriarchal social relations.”8
Masculinity and manhood encapsulate an ideology that goes beyond other characteristics of identity such as race, class, and sexuality.9 Heroism, for instance, is aligned to masculinity. The hero has been portrayed thr...
12 Pages(3000 words)Assignment

...Political communication: Today, voters no longer make decisions based only on personal opinion but view most issues through the eyes and ears of the media. Most options arise from interpretation of the symbols obtained from mass media. Political advertising is a prominent media for reaching voters. Political advertisements aim at increasing issue knowledge, influencing perceptions of the candidate’s character, altering attitudes and affecting candidate preference. In most political advertisements, politicians essentially promote themselves, their thoughts, beliefs, values, image and political propaganda. These advertisements can have a rather persuasive influence on voters. Political ads can convey both positive and negative feelings...
6 Pages(1500 words)Essay
sponsored ads
Save Your Time for More Important Things
Let us write or edit the essay on your topic "Crisis Communications Paper on MS13 Gang Violence" with a personal 20% discount.
GRAB THE BEST PAPER

Let us find you another Essay on topic Crisis Communications Paper on MS13 Gang Violence for FREE!