Comments (0)
Add to wishlistDelete from wishlist
Cite this document
Summary
Financial ratio analysis is a very popular technique in the evaluation of the financial health of a business organization.This report aims to yield a closer look at the financial performance of UK's leading hospitality company Whitbread Plc…
Download full paperFile format: .doc, available for editing
HIDE THIS PAPERGRAB THE BEST PAPER96.6% of users find it useful 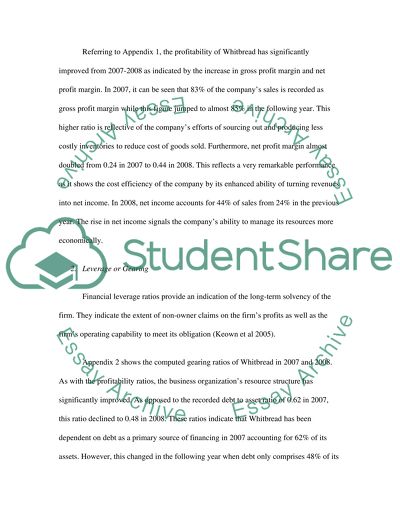 Download file to see previous pages This report aims to yield a closer look at the financial performance of UK's leading hospitality company Whitbread Plc with the aim of conducting a financial SWOT analysis.

Profitability ratios measure the ability of the company to generate income from its investments less the costs incurred (Keown et al 2005). In this analysis, gross profit margin, net profit margin, and asset turnover will be used.

Referring to Appendix 1, the profitability of Whitbread has significantly improved from 2007-2008 as indicated by the increase in gross profit margin and net profit margin. In 2007, it can be seen that 83% of the company's sales is recorded as gross profit margin while this figure jumped to almost 85% in the following year. This higher ratio is reflective of the company's efforts of sourcing out and producing less costly inventories to reduce cost of goods sold. Furthermore, net profit margin almost doubled from 0.24 in 2007 to 0.44 in 2008. This reflects a very remarkable performance as it shows the cost efficiency of the company by its enhanced ability of turning revenues into net income. In 2008, net income accounts for 44% of sales from 24% in the previous year. The rise in net income signals the company's ability to manage its resources more economically.
2. Leverage or Gearing
Financial leverage ratios provide an indication of the long-term solvency of the firm. They indicate the extent of non-owner claims on the firm's profits as well as the firm's operating capability to meet its obligation (Keown et al 2005).
Appendix 2 shows the computed gearing ratios of Whitbread in 2007 and 2008. As with the profitability ratios, the business organization's resource structure has significantly improved. As opposed to the recorded debt to asset ratio of 0.62 in 2007, this ratio declined to 0.48 in 2008. These ratios indicate that Whitbread has been dependent on debt as a primary source of financing in 2007 accounting for 62% of its assets. However, this changed in the following year when debt only comprises 48% of its resources. It should be noted that debt is seen as a more risky financial resource as it entails the regular payment of interest and face value at the end of its life. The shift from debt to equity therefore signals lower financial risk for Whitbread.
However, this improvement in resource structure fails to reflect in the company's interest coverage ratio which measures the proportion of interest expense to the business organization's income before tax. In 2007, this interest coverage ratio is 8.2 while it dropped to 3.3 in 2008. It should be noted though that in both years, the company has enough financial resource to cover its interest obligation.
3. Liquidity
Liquidity or solvency ratios are used as measures of the company's ability to finance its short-term obligations by its cash and near cash items (Keown et al 2005). Appendix 3 shows the computed liquidity ratios of Whitbread in 2007 and 2008.
The business organization is in danger in terms of liquidity. In both years, the company's current assets are meager compared to its immediate short term liabilities. If these current liabilities become due immediately, Whitbread will never be able to pay off all its short-term creditors. Furthermore, its liquidity ratios are deteriorating evidenced by the marked decline ...Download file to see next pagesRead More
Share:
Tags
Cite this document
(“Whitbread PLC Financial Summary Essay Example | Topics and Well Written Essays - 1500 words”, n.d.)
Whitbread PLC Financial Summary Essay Example | Topics and Well Written Essays - 1500 words. Retrieved from https://studentshare.org/miscellaneous/1504120-whitbread-plc-financial-summary

Audit risk should be estimated to a low level that will provide sufficient evidential material to obtain reasonable assurance in order to issue an opinion on financial statements.
Michelmerish Brick Holding Plc’s (MBHP) business consists of the production of clay products, landfill operations, and development of land. The operational profits in 2007 increased matching with the rise in revenue when compared to the performance with 2006. Under such a scenario of hugely increased operational activities, the acceptable low level of audit risk is a matter that may be determined by evaluating the auditor’s reliance on the extent and efficacy of internal controls in operation with MBHP. Besides the assessment of the acce...
7 Pages(1750 words)Assignment

Finances and Management of Marstons Plc and Whitbread Plc

...﻿ Financial Analysis and Management Introduction This report is divided into three parts. First part deals with an understanding about Price/ Earning ratios and its multiples. It determines that P/E ratio reflects the behavior of earnings over the price of shares of the firm. In the second part a comparative review is undertaken of the financial performances of Marston’s Plc and Whitbread Plc for the years 2007 and 2008.The review is carried through ratio analysis of the performances under the categories of profitability, liquidity, and activities. In third part the behavior of share prices of both companies is studied with reference to conclusions of the performances and behavior P/E ratio in first two parts of the report. Contents...
10 Pages(2500 words)Research Paper

The first paper is about International Banking Regulation. For banks that may want to spread across borders, the study gives an explanation of how the various policies and laws may affect its operations. The second paper in the study gives the various restrictions on the development of Pan-European bank mergers. It shows how regional liquidity shocks limit cross-border bank mergers. Thirdly, the study shows the various methods banks use in risk assessment when lending to less developed countries’ sovereign governments. It gives a topology that can help banks efficiently assess risks. An explanation of the multi-nationalization that is given in this paper comes with a model showing how applicable the profit maximization hypot...
8 Pages(2000 words)Literature review
sponsored ads
Save Your Time for More Important Things
Let us write or edit the essay on your topic "Whitbread PLC Financial Summary" with a personal 20% discount.
GRAB THE BEST PAPER

Let us find you another Essay on topic Whitbread PLC Financial Summary for FREE!