Comments (0)
Add to wishlistDelete from wishlist
Cite this document
Summary
More than 100 years ago George Eastman "put the first simple camera into the hands of a world of consumers" and proceeded to build one of the most innovative technological giants of its time anchored on "mass production at low cost, international distribution, extensive advertising and a focus on the customer." (Kodak 2007) Up to the 1990s, Kodak was a "blue-chip highflier" (Marcial 2007) that was looked up to not only for technological innovation in its field but a corporate giant worth emulating…
Download full paperFile format: .doc, available for editing
HIDE THIS PAPERGRAB THE BEST PAPER92.7% of users find it useful 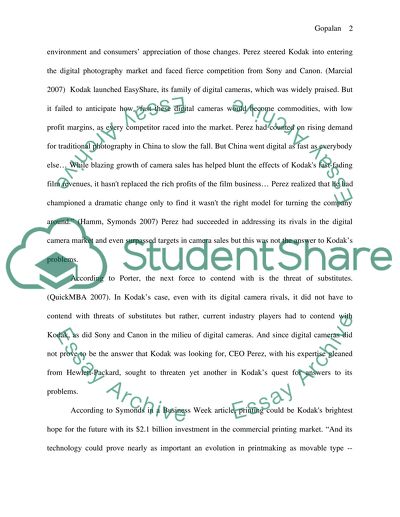 Download file to see previous pages The appointment of CEO Antonio Perez, in 2003, with his commitment to the "worldwide transformation of Kodak from a business based on film to one based primarily on digital technologies" (Marcial 2007) may well be the answer to Kodak's woes.
Will Eastman Kodak under the leadership of CEO Perez succeed to manage its new environment According to Michael Porter's five forces model of industry analysis, the points to consider are (1) Rivalry, (2) Threat of Substitutes, (3) Buyer Power, (4) Supplier Power, and (5) Barriers to Entry. (QuickMBA 2007)
Under Perez, Kodak realized that the company needed to reinvent and reposition itself. It was no longer the technological giant of the photography, film and film processing industry, because that industry was in danger of extinction with the changes in the technological environment and consumers' appreciation of those changes. Perez steered Kodak into entering the digital photography market and faced fierce competition from Sony and Canon. (Marcial 2007) Kodak launched EasyShare, its family of digital cameras, which was widely praised. But it failed to anticipate how "fast these digital cameras would become commodities, with low profit margins, as every competitor raced into the market. Perez had counted on rising demand for traditional photography in China to slow the fall. But China went digital as fast as everybody else While blazing growth of camera sales has helped blunt the effects of Kodak's fast-fading film revenues, it hasn't replaced the rich profits of the film business Perez realized that he had championed a dramatic change only to find it wasn't the right model for turning the company around." (Hamm, Symonds 2007) Perez had succeeded in addressing its rivals in the digital camera market and even surpassed targets in camera sales but this was not the answer to Kodak's problems.
According to Porter, the next force to contend with is the threat of substitutes. (QuickMBA 2007). In Kodak's case, even with its digital camera rivals, it did not have to contend with threats of substitutes but rather, current industry players had to contend with Kodak, as did Sony and Canon in the milieu of digital cameras. And since digital cameras did not prove to be the answer that Kodak was looking for, CEO Perez, with his expertise gleaned from Hewlett-Packard, sought to threaten yet another in Kodak's quest for answers to its problems.
According to Symonds in a Business Week article, printing could be Kodak's brightest hope for the future with its $2.1 billion investment in the commercial printing market. "And its technology could prove nearly as important an evolution in printmaking as movable type -- allowing for mass customization on unprecedented scales." (Symonds 2006) In this arena, again Kodak had to face tough competition from leaders Xerox and Hewlett-Packard, but "Kodak has pulled together a broader portfolio than rivals by picking up everything from the software and plates printers need to get a job started to the presses needed to complete it." (Symonds 2006) So, it wasn't so much that Kodak had to deal with the threats of substitutes but rather it had to work on becoming a potent threat itself to dislodge ...Download file to see next pagesRead More
Share:
Tags
Cite this document
(“Managing Eastman Kodaks New Environment Case Study”, n.d.)
Managing Eastman Kodaks New Environment Case Study. Retrieved from https://studentshare.org/miscellaneous/1504091-managing-eastman-kodaks-new-environment

... A Brave New World 26 February Introduction Man has always wondered since time immemorial about his ultimate place in the big universe. He had attempted to find meaning in this scheme of things without much success. A key repeated theme is seeming failure to find that true meaning that will justify his existence. What usually happens is that the more Man goes deeper into the search for ultimate meaning, the more he finds nothing. This is confounding, to say the least, and goes to show how useless the search could be. Many people had been doing this search several times and came up with nothing. Out of this seeming hopelessness and uselessness came the philosophical idea of the absurd – that Mans search for individual meaning is bound...
8 Pages(2000 words)Term Paper
sponsored ads
Save Your Time for More Important Things
Let us write or edit the case study on your topic "Managing Eastman Kodaks New Environment" with a personal 20% discount.
GRAB THE BEST PAPER

Let us find you another Case Study on topic Managing Eastman Kodaks New Environment for FREE!