Comments (0)
Add to wishlistDelete from wishlist
Cite this document
Summary
As per a proverb "Economist are pessimists: they have predicted 8 of the last depression" (Barry Asmus). Believe it or not this proverb tells a lot about the economists and their expertise. We know that Economics is the name of money and consumption; more precisely we can define economics as "How to earn the money and how to consume it" which is known as the main concept of economics.
…
Download full paperFile format: .doc, available for editing
HIDE THIS PAPERGRAB THE BEST PAPER95% of users find it useful 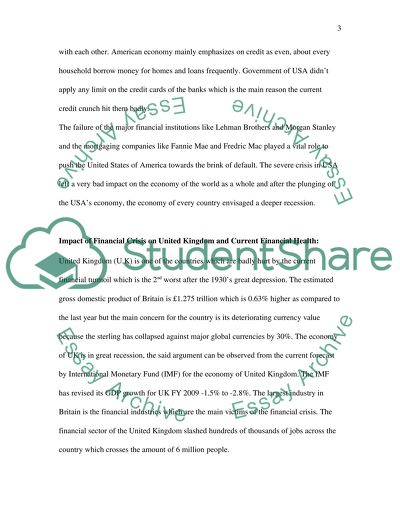 Download file to see previous pages The world leader, who dominated the world at that time, was USA (Still Dominating) had a very strong economy and currency. The global financial crisis crunch came on screen in September 2008, when a number of American giant financial institutions failed to sustain or merge with some other institutions mainly due to not meeting the regulatory requirements or inability to comply with them pertinently. Due to the dominating power and instinct of USA, the country must leave a positive or negative impact on the world economy whenever the country's economy plunges or hike, because the country provides a platform to most of the countries to indulge in exports and imports with each other. American economy mainly emphasizes on credit as even, about every household borrow money for homes and loans frequently. Government of USA didn't apply any limit on the credit cards of the banks which is the main reason the current credit crunch hit them badly.
The failure of the major financial institutions like Lehman Brothers and Morgan Stanley and the mortgaging companies like Fannie Mae and Fredric Mac played a vital role to push the United States of America towards the brink of default. The severe crisis in USA left a very bad impact on the economy of the world as a whole and after the plunging of the USA's economy, the economy of every country envisaged a deeper recession.
Impact of Financial Crisis on United Kingdom and Current Financial Health:
United Kingdom (U.K) is one of the countries which are badly hurt by the current financial turmoil which is the 2nd worst after the 1930's great depression. The estimated gross domestic product of Britain is 1.275 trillion which is 0.63% higher as compared to the last year but the main concern for the country is its deteriorating currency value because the sterling has collapsed against major global currencies by 30%. The economy of UK is in great recession, the said argument can be observed from the current forecast by International Monetary Fund (IMF) for the economy of United Kingdom. The IMF has revised its GDP growth for UK FY 2009 -1.5% to -2.8%. The largest industry in Britain is the financial industries which are the main victims of the financial crisis. The financial sector of the United Kingdom slashed hundreds of thousands of jobs across the country which crosses the amount of 6 million people.
A year ago finance officials thought that the British economy had become particularly resilient to shocks, but after the shrinking currency value and persistently condensing deposits in the banks, the perceptions seem to be not working for the Britain. The financial constraints mounting pressure and fear of bankruptcy still intervenes between the banks and borrowers, as the banks of UK are still reluctant to lend the money to the borrowers. The current interest rates of UK's banks are 1% but it is unable to attract the foreign investors as well as the domestic investment influences them to cut down the interest rates further to stress the investors to put their money in the banks. Recently the US did the same and cut the interest rates to 0.25% merely to attract investments. United Kingdom is one of those countries who are heavily relying ...Download file to see next pagesRead More
Share:
Tags
Cite this document
(“CURRENT FINANCIAL CONDITIONS & THE INDUSTRIES Essay”, n.d.)
CURRENT FINANCIAL CONDITIONS & THE INDUSTRIES Essay. Retrieved from https://studentshare.org/miscellaneous/1503848-current-financial-conditions-the-industries

CHECK THESE SAMPLES OF CURRENT FINANCIAL CONDITIONS & THE INDUSTRIES

The number of factors or attributes desired from the vendor is vast, and different organizations and different industries place different importance on the attributes (Sonmat, 2006). Some of the vendor attributes may gain importance owing to the nature of the industry, for example, in the case of consumer perishables suppliers, like fresh vegetables or fruits, the buying firm would...
20 Pages(5000 words)Literature review
sponsored ads
Save Your Time for More Important Things
Let us write or edit the essay on your topic "CURRENT FINANCIAL CONDITIONS & THE INDUSTRIES" with a personal 20% discount.
GRAB THE BEST PAPER

Let us find you another Essay on topic CURRENT FINANCIAL CONDITIONS & THE INDUSTRIES for FREE!