Comments (0)
Add to wishlistDelete from wishlist
Cite this document
Summary
Feminism is both an intellectual commitment and a political movement that seeks justice for women and the end of sexism in all forms (Jacqui and Albrecht, 1998). It is a social theory and a political movement at the same time which is primarily informed and motivated by the experiences of women…
Download full paperFile format: .doc, available for editing
HIDE THIS PAPERGRAB THE BEST PAPER92.2% of users find it useful 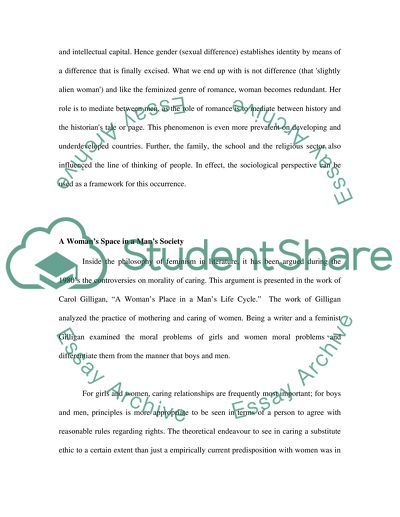 Download file to see previous pages Nonetheless, motivated by the quest for social justice, feminist inquiry provides a wide range of perspectives on social, cultural, and political phenomena. Important topics for feminist theory and politics include: the body, class and work, disability, the family, globalization, human rights, popular culture, race and racism, reproduction, science, the self, sex work, and sexuality.
Issues on gender such as equality have always existed ever since the early ages. Although perhaps, the movement for gender equality gradually evolved in the late 19th century and was fuelled by women movements in the 20th century; the mild, moderate and radical feminist groups mustered their organizing influence to slowly inflict change in the society. For instance, the barrier that significantly defined the fate of every woman in the employment sector has been increasingly downgraded by the emphasis on competitiveness and productiveness.
While the traditional system had emphasized the necessity for strength due largely for the lack or insufficiency of machines, this era highlights the essence of competence and intellectual capital. Hence gender (sexual difference) establishes identity by means of a difference that is finally excised. What we end up with is not difference (that 'slightly alien woman') and like the feminized genre of romance, woman becomes redundant. Her role is to mediate between men, as the role of romance is to mediate between history and the historian's tale or page. This phenomenon is even more prevalent on developing and underdeveloped countries. Further, the family, the school and the religious sector also influenced the line of thinking of people. In effect, the sociological perspective can be used as a framework for this occurrence.
A Woman's Space in a Man's Society
Inside the philosophy of feminism in literature, it has been argued during the 1980's the controversies on morality of caring. This argument is presented in the work of Carol Gilligan, "A Woman's Place in a Man's Life Cycle." The work of Gilligan analyzed the practice of mothering and caring of women. Being a writer and a feminist Gilligan examined the moral problems of girls and women moral problems and differentiate them from the manner that boys and men.
For girls and women, caring relationships are frequently most important; for boys and men, principles is more appropriate to be seen in terms of a person to agree with reasonable rules regarding rights. The theoretical endeavour to see in caring a substitute ethic to a certain extent than just a empirically current predisposition with women was in part a response to the overpowering supremacy that the notion of justice, with its associated conceptual moral values, had been an agreement in the moral theory educated and conferred in philosophy and fields pressured by it in the preceding decade and during most of the history of moral theory. The existence of women's experience, an ethic of care distinguished that caring for children and dependent relative persons is a significant action linking moral values; it observes persons as mutually dependent rather than as free human beings and holds that morality should deal with issues of caring and understanding and relationships between people rather than only or first and foremost the rational decisions of solitary moral agents.
Most women choose to talk about moral problems in a more realistic situation, this is considered by Gilligan ...Download file to see next pagesRead More
Share:
Tags
Cite this document
(“Feminism: power of development Essay Example | Topics and Well Written Essays - 2000 words”, n.d.)
Retrieved from https://studentshare.org/miscellaneous/1503517-feminism-power-of-development

CHECK THESE SAMPLES OF Feminism: power of development

When it comes to the cognitive development of children, the name of Piaget is und...
7 Pages(1750 words)Assignment
sponsored ads
Save Your Time for More Important Things
Let us write or edit the essay on your topic "Feminism: power of development" with a personal 20% discount.
GRAB THE BEST PAPER

Let us find you another Essay on topic Feminism: power of development for FREE!