Comments (0)
Add to wishlistDelete from wishlist
Cite this document
Summary
Poverty can not be ignored in the society. The word may have been overly used by many such that it is too commonly used especially in the third word yet it is a word that does not exempt even the most developed countries. Poverty exists in every sense of the word, but majority ignores its, unless something is written or someone has made a scene out of it that the community is reminded of the fact that there are still people who live in extreme poverty, who would make all their efforts to survive…
Download full paperFile format: .doc, available for editing
HIDE THIS PAPERGRAB THE BEST PAPER91.4% of users find it useful 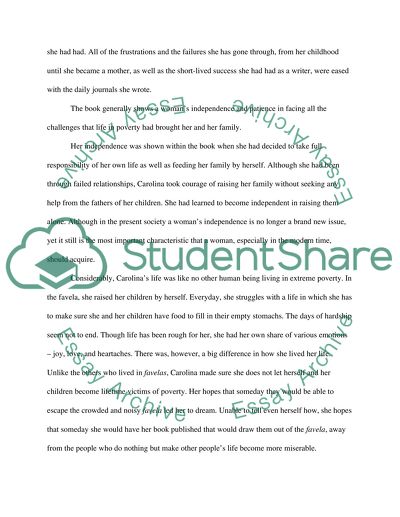 Download file to see previous pages On the other hand, the gap between those who live in comfort as well as those who are deprived of it should be resolved.
In Carolina Maria de Jesus' 'Child of the Dark', she had implied that the rich and the poor co-exist. Both groups in the society need each other for the most basic reason that the rich may not be able to see and appreciate what they have unless they see those who do not have it.
Life in the favela was something that Carolina might consider as a nightmare. On the other hand, this is where she had learned to dream for her children. Living in poverty, moreover, had taught Carolina to become stronger and face the world with more courage. She had fought the frustrations and the challenges of her family's hand-to-mouth existence by herself. And it is only through writing her daily journal where she had found refuge out of all the disappointments she had had. All of the frustrations and the failures she has gone through, from her childhood until she became a mother, as well as the short-lived success she had had as a writer, were eased with the daily journals she wrote.
The book generally shows a woman's independence and patience in facing all the challenges that life in poverty had brought her and her family.
Her independence was shown within the book when she had decided to take full responsibility of her own life as well as feeding her family by herself. Although she had been through failed relationships, Carolina took courage of raising her family without seeking any help from the fathers of her children. She had learned to become independent in raising them alone. Although in the present society a woman's independence is no longer a brand new issue, yet it still is the most important characteristic that a woman, especially in the modern time, should acquire.
Considerably, Carolina's life was like no other human being living in extreme poverty. In the favela, she raised her children by herself. Everyday, she struggles with a life in which she has to make sure she and her children have food to fill in their empty stomachs. The days of hardship seem not to end. Though life has been rough for her, she had her own share of various emotions - joy, love, and heartaches. There was, however, a big difference in how she lived her life. Unlike the others who lived in favelas, Carolina made sure she does not let herself and her children become lifetime victims of poverty. Her hopes that someday they would be able to escape the crowded and noisy favela led her to dream. Unable to tell even herself how, she hopes that someday she would have her book published that would draw them out of the favela, away from the people who do nothing but make other people's life become more miserable.
It is not on courage where Carolina had learned to survive. It is through unending patience where she had found the true reason to continue living for herself and for her children. Courage loses every time you use it as an armor against disappointments and frustrations - ...Download file to see next pagesRead More
Share:
Tags
Cite this document
(“Poverty Book Report/Review Example | Topics and Well Written Essays - 1000 words”, n.d.)
Poverty Book Report/Review Example | Topics and Well Written Essays - 1000 words. Retrieved from https://studentshare.org/miscellaneous/1503452-poverty-book-reportreview

The Use of Marijuana in Canada

God In The Jewish Tradition

Prepare a report presenting the results of the analysis of recent trends in sales, costs and profits of a chosen company

... mission and vision of the company. Beyond this, it also needs to review how its strategy formulation and strategy implementation had gotten separated in the last few years (Grant 2005, p. 187). Even with todays remaining six divisions (infrastructure, industrials, commercial finance, GE Money, health care and NBC-Universal), it still needs to trim down. In other words, G.E. needs to reformulate its strategy and decide once and for all that it is no longer viable to be a conglomerate. The days of empire are over and it is best to start selecting the core areas in which it can compete effectively by disposing of non-core assets and businesses. It is only now that G.E. has finally tried to go past the shadow of Jack Welch whose influence...
12 Pages(3000 words)Report
sponsored ads
Save Your Time for More Important Things
Let us write or edit the book report/review on your topic "Poverty Book Report/Review" with a personal 20% discount.
GRAB THE BEST PAPER