Comments (0)
Add to wishlistDelete from wishlist
Cite this document
Summary
1.) Heavily religious in theme, the paintings and other visual arts in the Middle Ages generally depicted the impersonal and pious living. As such, humans were portrayed as stiff and lacking in emotions. Their shapes are flat and elongated. Humans were painted in a solid background (Medieval Art).
…
Download full paperFile format: .doc, available for editing
HIDE THIS PAPERGRAB THE BEST PAPER91.4% of users find it useful 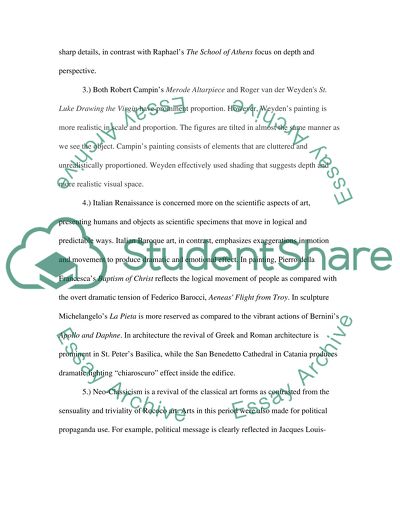 Extract of sample "History of Art"

Download file to see previous pages 2.) Italian Renaissance is more vibrant and more prominent than Northern Renaissance. Since there are more commercial and trading centers in Italy at those times than the countries in the north of Italy, particularly France, the Netherlands, and Germany, Italian Renaissance artists had more patrons than their Northern counterparts.
The Dukes of Burgundy in the Northern Renaissance were more interested in buying illuminated manuscripts, tapestries and furnishings while Italian art patrons were more into painting. Humanism, a revisiting of Greco-Roman scientific presentation of art, is the driving force behind the Italian Renaissance artists. The Northern Renaissance focused more on topics on religious reform. In terms of rendering of paintings, Italian Renaissance painters are keener on scientific aspects, while their Northern counterparts are more concerned on what they art look like thus, putting emphasis on color and detail. Jan van Eyck's Madonna in the Church, for example, is painted in vivid colors and in sharp details, in contrast with Raphael's The School of Athens focus on depth and perspective.
3.) Both Robert Campin's Merode Altarpiece and Roger van der Weyden's St. Luke Drawing the Virgin have prominent proportion. However, Weyden's painting is more realistic in scale and proportion. The figures are tilted in almost the same manner as we see the object. Campin's painting consists of elements that are cluttered and unrealistically proportioned. Weyden effectively used shading that suggests depth and more realistic visual space.
4.) Italian Renaissance is concerned more on the scientific aspects of art, presenting humans and objects as scientific specimens that move in logical and predictable ways. Italian Baroque art, in contrast, emphasizes exaggerations in motion and movement to produce dramatic and emotional effect. In painting, Pierro della Francesca's Baptism of Christ reflects the logical movement of people as compared with the overt dramatic tension of Federico Barocci, Aeneas' Flight from Troy. In sculpture Michelangelo's La Pieta is more reserved as compared to the vibrant actions of Bernini's Apollo and Daphne. In architecture the revival of Greek and Roman architecture is prominent in St. Peter's Basilica, while the San Benedetto Cathedral in Catania produces dramatic lighting "chiaroscuro" effect inside the edifice.
5.) Neo-Classicism is a revival of the classical art forms as contrasted from the sensuality and triviality of Rococo art. Arts in this period were also made for political propaganda use. For example, political message is clearly reflected in Jacques Louis-David's Death of Marat. Classical themes painted by fresh techniques, such as the use of contrast, characterize David's style and those of Neoclassical artists (Heindorff).
6.) The Oath of Horatii depicts Jacques Louis David's pioneering effort in French painting. It is marked by the usage of contrast in identifying three different groups of figures in the painting. David also effectively uses harmony of colors, arrangement of figures and of a majestic shadow that provides depth and contrast, as well as abstract nature of the painting (Jacques-Louis David: The Oath of the Horatii).
7.) Since the United States were under the British colonial rule, most European influence can be vividly seen in early American paintings. Neoclassicism, with its aim to use art as a form ...Download file to see next pagesRead More
Share:
Tags
Cite this document
(“History of Art Essay Example | Topics and Well Written Essays - 750 words”, n.d.)
History of Art Essay Example | Topics and Well Written Essays - 750 words. Retrieved from https://studentshare.org/miscellaneous/1503223-history-of-art

CHECK THESE SAMPLES OF History of Art

Television is the most widely used mean of spreading information as it is helpful in not only delivering the information but also aids learning while people use their two main senses i.e. hearing and viewing. Research says that we can learn things more quickly by seeing and viewing things. The pictures or ads shown on television easily convince people to use these brands. Customers can easily know the advantages of the products they want to use without any struggle. It is the most effective way of spreading information. Educational television is also playing its role in building character and knowledge of the young generation. Overcrowded schools, teacher shortage and enormous amounts of fees to be paid are the main reasons that a...
6 Pages(1500 words)Coursework
sponsored ads
Save Your Time for More Important Things
Let us write or edit the essay on your topic "History of Art" with a personal 20% discount.
GRAB THE BEST PAPER

Let us find you another Essay on topic History of Art for FREE!