Comments (0)
Add to wishlistDelete from wishlist
Cite this document
Summary
The question on whether Karter or Noonan must pay Jimmy the $1000 USD that he has lost will depend on the legal facts behind this case. A legal justification will also be at hand before any responsibility can be shifted to Jimmy, Karter and Vincent on who is liable for the paintings.
…
Download full paperFile format: .doc, available for editing
HIDE THIS PAPERGRAB THE BEST PAPER93.1% of users find it useful 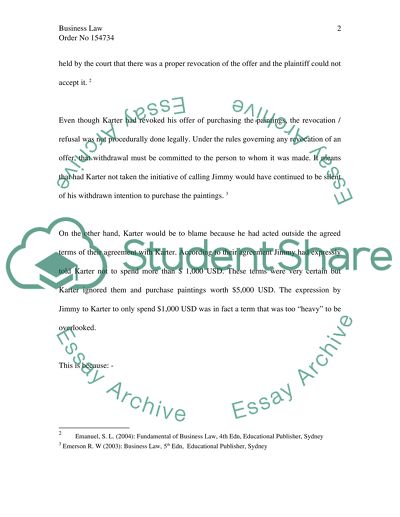 Download file to see previous pages By this time Karter had not parted with the money to purchase the paintings. Therefore Karter purchases the paintings knowing very well that Jimmy had repudiated his offer and was not going to make any good payment of them. 1
In Dickinson Vs Dodds, 1876, the defendant gave the plaintiff a written offer to sell him his house for 800 on Wednesday. The offer was to be left open until next Friday 9 a.m. On Thursday the defendant sold the house to someone else. On that very evening, the plaintiff was told of the sale by a third party, but before 9 a.m. on Friday the plaintiff delivered his acceptance to the defendant which the defendant refused to receive. It was held by the court that there was a proper revocation of the offer and the plaintiff could not accept it. 2
Even though Karter had revoked his offer of purchasing the paintings, the revocation / refusal was not procedurally done legally. Under the rules governing any revocation of an offer, that withdrawal must be committed to the person to whom it was made. It means that had Karter not taken the initiative of calling Jimmy would have continued to be silent of his withdrawn intention to purchase the paintings. 3
On the other hand, Karter would be to blame because he had acted outside the agreed terms of their agreement with Karter. According to their agreement Jimmy had expressly told Karter not to spend more than $ 1,000 USD. These terms were very certain but Karter ignored them and purchase paintings worth $5,000 USD. The expression by Jimmy to Karter to only spend $1,000 USD was in fact a term that was too "heavy" to be overlooked.
This is because: -
(a) Jimmy would not have entered into the contract if the statement was not made. The statement was important because it showed the maximum amount of money that he had and which he was willing to spend on paintings.
(b) The statement was made immediately alongside the other agreements meaning that the representer highly regarded its importance.
But Karter can still argue that he had thought that the statement was not a term of the contract since it was not followed by a written agreement. Jimmy could have reduced his oral expression into writing.

Though he did not expressly state that he could not purchase the paintings if they cost over $1,000 USD, it was implied that he was not going to spend over $1,000 USD in paintings. These are implied terms that parties probably had in mind but did not bother to express. They have to be implied by the courts. Additionally, the parties would have expresses this agreement in writing if they had foreseen the difficulty occurring. Such terms the parties could have expressed in writing had they seen the difficulties are implied by the courts because of the court's view of fairness or public policy.
Vincent acted in good faith in selling his painting and cannot be held responsible. He was made to believe in statements that were not true. He was in fact misrepresented by Karter who told him that he had been authorized to purchase the painting on behalf of Jimmy. Misrepresentation renders the contract voidable at the option of the innocent party. The statement was made are the time the contract was made and it induced Vincent into the contract. 4
Vincent could not have entered into the contract if: -
(i) He knew that Karter's statement was false.
(ii) He would have made the contract despite the misrepresentation.
(iii) He did not know that there had been a misrepresentation i.e. after entering into the ...Download file to see next pagesRead More
Share:
Tags
Cite this document
(“Businese Law Essay Example | Topics and Well Written Essays - 2500 words”, n.d.)
Businese Law Essay Example | Topics and Well Written Essays - 2500 words. Retrieved from https://studentshare.org/miscellaneous/1503154-businese-law

CHECK THESE SAMPLES OF Businese Law

Thus, the advertisement placed by Adams in the local newspaper is an invitation to treat and not an offer, as per the case law discussed above. It is to be determined, whether Adam had formed legally binding contracts...
6 Pages(1500 words)Case Study
sponsored ads
Save Your Time for More Important Things
Let us write or edit the essay on your topic "Businese Law" with a personal 20% discount.
GRAB THE BEST PAPER

Let us find you another Essay on topic Businese Law for FREE!