The Financial Crisis of 2008 - Essay Example

Comments (0)
Add to wishlistDelete from wishlist
Cite this document
Summary
The media has contributed to the opinion that the subprime lending and low government intervention as the triggers for the current recession, but new and slightly different ideas have been offered by various observers. Dramatic rising social inequality in the U.S in the past thirty five years is supposed to be the underlying cause of the current financial crisis [Wisman &Barker, 2008].According to this idea, to maintain a relatively higher standard of living, individuals from the lower and middle srata of society started consuming more, as a result of which savings declined, working hours increased and households resorted to higher debts…
Download full paperFile format: .doc, available for editing
HIDE THIS PAPERGRAB THE BEST PAPER91.2% of users find it useful 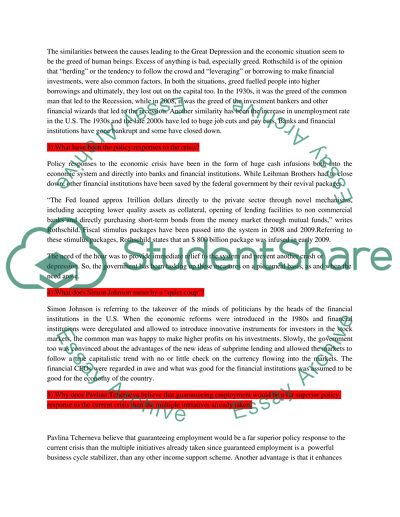 Extract of sample "The Financial Crisis of 2008"

Download file to see previous pages [Wisman &Barker, 2008].
An interesting and relatively new idea is put forth by James Livingston in his book "Their Great Depression and Ours," Challenge. He argues that the cause of the Great Depression in the 1930s was poor wage performance leading to large profits in search of few investment opportunities. In another article, Saving Private Savings, or, The God That Failed he discusses at length the plausible reasons reasons for the current economic crisis. While not blaming anyone in particular for the present economic crisis, he opines that economic growth is possible only through higher consumer demand and spending. This in turn requires higher savings. In his words, "economic growth has proceeded as a function of declining net investment for the last 90 years."As the sequence of events that should have been tax cuts, savings, investments by the government and higher job growth, higher wages and higher spending got mixed up, higher private savings from households and business firms were parked in the stock market, the speculative bubble had to burst, both in 1920s and now.
2) What are some of the similarities and differences between the current crisis and the one that launched the Great Depression
The Great Depression of the 1930s was brought on by the crash of the Wall Street in September and October 1929.Stock prices tumbled by almost 50% in a matter of two months. The market had probably been overbought and had reached a peak before it came crashing down. The unpredictable stock markets that had been steadily rising for some time shed the excess fat and trimmed down considerably. Investors who had made good gains in stock markets the preceding years had borrowed from banks to invest more on the stock markets. When the markets crashed, there was panic all round. Banks were unable to recover debts, news of banks closing down spread and people wanted to withdraw all their savings. Banks were weary and wanted to sit on cash and stopped lending. This led to closure of the manufacturing units dependent on credit which in turn led to large scale unemployment. Finally the government took drastic steps to check the recession and the economy stopped declining.
The similarities between the causes leading to the Great Depression and the economic situation seem to be the greed of human beings. Excess of anything is bad, especially greed. Rothschild is of the opinion that "herding" or the tendency to follow the crowd and "leveraging" or borrowing to make financial investments, were also common factors. In both the situations, greed fuelled people into higher borrowings and ultimately, they lost out on the capital too. In the 1930s, it was the greed of the common man that led to the Recession, while in 2008, it was the greed of the investment bankers and other financial wizards that led to the recession. Another similarity has been ...Download file to see next pagesRead More
Share:
Tags
Cite this document
(“The Financial Crisis of 2008 Essay Example | Topics and Well Written Essays - 750 words”, n.d.)
The Financial Crisis of 2008 Essay Example | Topics and Well Written Essays - 750 words. Retrieved from https://studentshare.org/miscellaneous/1503068-the-financial-crisis-of-2008

CHECK THESE SAMPLES OF The Financial Crisis of 2008

The first paper is about International Banking Regulation. For banks that may want to spread across borders, the study gives an explanation of how the various policies and laws may affect its operations. The second paper in the study gives the various restrictions on the development of Pan-European bank mergers. It shows how regional liquidity shocks limit cross-border bank mergers. Thirdly, the study shows the various methods banks use in risk assessment when lending to less developed countries’ sovereign governments. It gives a topology that can help banks efficiently assess risks. An explanation of the multi-nationalization that is given in this paper comes with a model showing how applicable the profit maximization hypot...
8 Pages(2000 words)Literature review
sponsored ads
Save Your Time for More Important Things
Let us write or edit the essay on your topic "The Financial Crisis of 2008" with a personal 20% discount.
GRAB THE BEST PAPER

Let us find you another Essay on topic The Financial Crisis of 2008 for FREE!