Comments (0)
Add to wishlistDelete from wishlist
Cite this document
Summary
This study looks at the buying behaviour of mobile phone customers in the U.K. using analysis of secondary research data to test the hypothesis that such behaviour is rational. Based on findings from the latest annual industry survey conducted by the Communications Management Association of the U.K…
Download full paperFile format: .doc, available for editing
HIDE THIS PAPERGRAB THE BEST PAPER99% of users find it useful 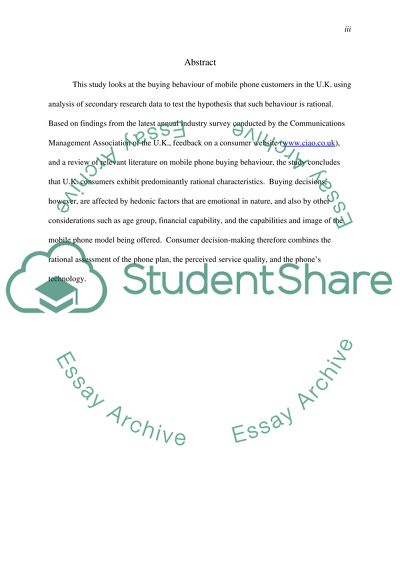 Extract of sample "Mobile Phone Buying Behaviour in the UK"

Download file to see previous pages This study looks at the buying behaviour of mobile phone customers in the U.K. using analysis of secondary research data to test the hypothesis that such behaviour is rational. Based on findings from the latest annual industry survey conducted by the Communications Management Association of the U.K., feedback on a consumer website (www.ciao.co.uk), and a review of relevant literature on mobile phone buying behaviour, the study concludes that U.K. consumers exhibit predominantly rational characteristics. Buying decisions, however, are affected by hedonic factors that are emotional in nature, and also by other considerations such as age group, financial capability, and the capabilities and image of the mobile phone model being offered. Consumer decision-making therefore combines the rational assessment of the phone plan, the perceived service quality, and the phone's technology.2. To determine which of the following features have greater influence on the customer's decision to buy a mobile phone: the plan (tariffs, free minutes, network coverage, etc.), the phone itself (capabilities, image, or advertising), customer service, or a combination of any or all three factors.Conventional marketing theory predicts that buying behaviour of mobile phones follows a rational process because a mobile phone is a high-technology product, it is useful, and it is a personal item that a consumer has close at hand for many hours during the day.
The study aims to test the hypothesis that the mobile phone buying behaviour is rational.
Proving our hypothesis would mean that customers who buy mobile phones follow a rational decision-making process that marketing theorists summarise as a five-stage process of Awareness Interest Evaluation Trial Adoption.
In order to determine whether the buying behaviour is rational, this study looks at each stage of the buying process according to a set of basic rational and emotional factors as shown in Tables 1 and 2. Using secondary research based on U.K. consumer data and their decision to buy a mobile phone service, it would be possible to compare responses with the rational and emotional factors and test our hypothesis based on the results. The hypothesis can be confirmed if the results show that rational factors consistently score higher than emotional factors. Otherwise, the hypothesis is false.
Research Methodology and Literature Review
The research study used three secondary data sources.
The first data source is the latest annual survey of the Communications Management Association (CMA, 2006), a U.K.-based professional organisation of companies in the telecommunications sector, which includes mobile phone suppliers such as Nokia, Sony Ericsson, and Motorola; and mobile service providers such as Vodafone, Orange, O2, T-Mobile, and Virgin. The CMA has been conducting an annual survey since 2003 and publishing the results on its website (www.thecma.com).
The CMA conducted its last annual surveys in 2006, and part of the data gathered from the survey are the factors that make up consumer decision-making and satisfaction, consumer concerns, and image perceptions towards mobile phone suppliers and mobile service providers.
The second source of data is ciao.co.uk, a shopping intelligence ...Download file to see next pagesRead More
Share:
Tags
Cite this document
(“Mobile Phone Buying Behaviour in the UK Research Paper”, n.d.)
Mobile Phone Buying Behaviour in the UK Research Paper. Retrieved from https://studentshare.org/miscellaneous/1502935-mobile-phone-buying-behaviour-in-the-uk

CHECK THESE SAMPLES OF Mobile Phone Buying Behaviour in the UK

Johnson et al highlight that external macro-economic factors intrinsically impact strategy management and without accounting for macroeconomic factors in strategy development and management, a business will fail (Johnson et al, 2008, p.3). If we consider this contextually with regard to the UK grocery market; the move demise of the local high street store to the dominance of supermarkets in the past 20 years has radically transformed the grocery market ( Henry, 2008, p.77). For example, the DEFRA Economic Note on UK Grocery Retailing (2006) indicates that in addition to continued growth in the UK Grocery Retail sector; approximately “3/4 sales are made in supermarkets and superstores… with traditional small retailers...
13 Pages(3250 words)Assignment
sponsored ads
Save Your Time for More Important Things
Let us write or edit the research paper on your topic "Mobile Phone Buying Behaviour in the UK" with a personal 20% discount.
GRAB THE BEST PAPER

Let us find you another Research Paper on topic Mobile Phone Buying Behaviour in the UK for FREE!