Comments (0)
Add to wishlistDelete from wishlist
Cite this document
Summary
Locke names labour the source of property, and that is how he disputes the division of society into classes. He is sure that everyone can become rich and prosperous thanks to him own labouriousness…
Download full paperFile format: .doc, available for editing
HIDE THIS PAPERGRAB THE BEST PAPER91.3% of users find it useful 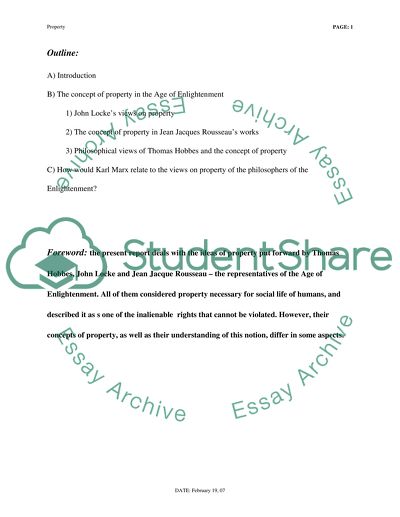 Download file to see previous pages John Locke is considered one of the precursors of American democracy, and his political concept is based predominantly upon social contract theory and natural rights of human beings. He believed that the state should have legislative and executive power, as well as the right to decide whether to start military actions or not (the right for war and peace). However, it is very important that he refused to grant the state with the right to handle people’s lives and property: according to J. Locke, these two were the natural rights of people, and they could only be restricted if the security of other citizens was endangered. In Locke’s ideal state, therefore, the government could not take property from people, nor could it even collect different kinds of payments without previous agreement of the majority of people (or their representatives) to pay this money.
Talking of freedom as the natural condition for all the citizens of his ideal state, John Locke stated that the main natural right of people (the right of property) should necessarily be secured using legal regulations, so that no conflicts arise. Locke believed that the political society is formed by means of concluding a "social contract", and as a result the government is formed which has to be responsible to people:
"The natural liberty of man is to be free from any superior power on earth, and not to be under the will or legislative authority of man, but to have only the law of nature for his rule. The liberty of man, in society, is to be under no other legislative power, but that established, by consent, in the commonwealth; nor under the dominion of any will, or restraint of any law, but what that legislative shall enact, according to the trust put in it." (Chapter IV (Of Liberty), Section 22)
All in all, John Locke's idea of state was concluding this social contract that would restrict the freedom of people to a certain extent, but the right of property was viewed by him as the right that can by no means be violated. J. Locke believed that the reason why some people have more property than others is because though all children are born equal, in the process of development some of them get more knowledge and prove to have better abilities, and therefore the result of this labour (property) should not be alienated from its owner.
it is very easy to conceive, without any difficulty, how labour could at first begin a title of property in the common things of nature, and how the spending it upon our uses bounded it. So that there could then be no reason of quarrelling about title, nor any doubt about the largeness of possession it gave. Right and conveniency ...Download file to see next pagesRead More
Share:
Tags
Cite this document
(“The Concept Of Property In The Philosophy Of The Enlightenment Essay”, n.d.)
Retrieved from https://studentshare.org/miscellaneous/1502269-the-concept-of-property-in-the-philosophy-of-the-enlightenment

(The Concept Of Property In The Philosophy Of The Enlightenment Essay)
https://studentshare.org/miscellaneous/1502269-the-concept-of-property-in-the-philosophy-of-the-enlightenment.

“The Concept Of Property In The Philosophy Of The Enlightenment Essay”, n.d. https://studentshare.org/miscellaneous/1502269-the-concept-of-property-in-the-philosophy-of-the-enlightenment.
Comments (0)
Click to create a comment or rate a document

These verses express the importance of karma in guiding the Buddhists in th...
6 Pages(1500 words)Assignment
sponsored ads
Save Your Time for More Important Things
Let us write or edit the essay on your topic "The Concept Of Property In The Philosophy Of The Enlightenment" with a personal 20% discount.
GRAB THE BEST PAPER

Let us find you another Essay on topic The Concept Of Property In The Philosophy Of The Enlightenment for FREE!