Benefits to Bailing Out the Big 3 - Essay Example

Comments (0)
Add to wishlistDelete from wishlist
Cite this document
Summary
Yes the Billions of Dollars for a Federal Bailout of Chrysler, Ford, and GM makes great sense for Americans. Yet, a number of people disagree entirely; feeling that such a bail out could cause trouble for the American people. Some even say that allowing the government to give so much money to these three companies will cause America to become more like a socialistic country because the government will seize control of these companies and regulate how they will conduct business…
Download full paperFile format: .doc, available for editing
HIDE THIS PAPERGRAB THE BEST PAPER97.4% of users find it useful 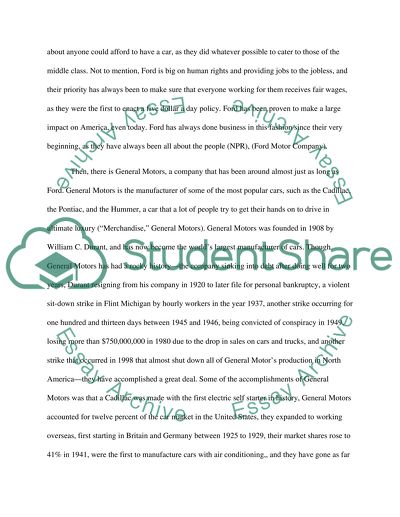 Extract of sample "Benefits to Bailing Out the Big 3"

Download file to see previous pages Sure, these companies will be subject to certain conditions when borrowing federal money; however, it is no different if they were to borrow from a bank. Banks also like to see what the borrowed money will be used for, and in some instances, they like to see an entire plan drafted up before letting the money go. Lenders like to see that the one they are lending to has a purpose for borrowing from them, and the borrower is subject to those terms until the loan is paid off. While numerous individuals put a lot of effort into disputing why helping these three companies with their losses is not a good idea, there are a number of reasons why the bail out of these three companies makes great sense for the American people.
First of all, we must look at how long these three companies have been in business, as well as the history behind these companies. Ford has been in business since 1903, when it was first founded by Henry Ford, Sr. The first car manufactured by the ford family, known as the Model T, was ready to deliver to the public in 1925. This company was the first to put the first car on the road, as well as the first to make cars available to the masses. Ford made sure just about anyone could afford to have a car, as they did whatever possible to cater to those of the middle class. Not to mention, Ford is big on human rights and providing jobs to the jobless, and their priority has always been to make sure that everyone working for them receives fair wages, as they were the first to enact a five dollar a day policy. Ford has been proven to make a large impact on America, even today. Ford has always done business in this fashion since their very beginning, as they have always been all about the people (NPR), (Ford Motor Company).
Then, there is General Motors, a company that has been around almost just as long as Ford. General Motors is the manufacturer of some of the most popular cars, such as the Cadillac, the Pontiac, and the Hummer, a car that a lot of people try to get their hands on to drive in ultimate luxury ("Merchandise," General Motors). General Motors was founded in 1908 by William C. Durant, and has now become the world's largest manufacturer of cars. Though General Motors has had a rocky history-the company sinking into debt after doing well for two years, Durant resigning from his company in 1920 to later file for personal bankruptcy, a violent sit-down strike in Flint Michigan by hourly workers in the year 1937, another strike occurring for one hundred and thirteen days between 1945 and 1946, being convicted of conspiracy in 1949, losing more than $750,000,000 in 1980 due to the drop in sales on cars and trucks, and another strike that occurred in 1998 that almost shut down all of General Motor's production in North America-they have accomplished a great deal. Some of the accomplishments of General Motors was that a Cadillac was made with the first electric self starter in history, General Motors accounted for twelve percent of the car market in the United States, they expanded to working overseas, first starting in Britain and Germany between 1925 to 1929, their market shares rose to 41% in 1941, were the first to manufacture cars with air conditioning,, and they have gone as far as to selling cars in ...Download file to see next pagesRead More
Share:
Tags
Cite this document
(“Benefits to Bailing Out the Big 3 Essay Example | Topics and Well Written Essays - 2000 words”, n.d.)
Retrieved from https://studentshare.org/miscellaneous/1502146-benefits-to-bailing-out-the-big-3

CHECK THESE SAMPLES OF Benefits to Bailing Out the Big 3

An automated computer control system that is used to run the invoicing process, and especially one that is available, can offer a company so much into realizing its goal and objectives and act as a highway through which growth and expansion could be realized without investing much in terms of money and time. Most benefits have to do with gaining the customers’ confidence and winning their loyalty to the IT clean services company.
To the users, the invoicing system offers cost-effectiveness as a crucial advantage, among others. To begin with, such a system saves the customers on time and money needed to travel to the company to request and pay for a service that has been offered. This process has been done initially in a...
6 Pages(1500 words)Term Paper

Some researchers have come out with conclusions that soft drinks have negative impacts on the consumers and the environment. However, the critics of this idea state that soft drinks have many positive benefits as refresher drinks and it would be unreasonable to condemn them as causes of behavioral diseases and environmental pollution. From a critical point of view, it is clear that soft drinks have serious impacts on the health of individuals and there is a need to look into safer ways of satisfying this demand and to reduce the harmful effects of these drinks.
For the past two decades, there has been a significant increase in the demand for soft drinks in the whole world and companies have capitalized on this demand to make...
9 Pages(2250 words)Term Paper

The Benefits of a Sperm Bank

Sperm banks are facilities designated specifically for receiving and storing sperms which are later used by women who need the same. Sperm obtained from such a donor is known as donor sperm (Falcone and Hurd 539). Other names for sperm banks include cryobank and semen banks. As medically perceived there is no difference between pregnancies gotten through the natural insemination and ones that have been artificially inseminated (Falcone and Hurd 547). Though this as said may be true, but could this be the view of every other person?
The fact that sperm can be donated raises a few ethical issues that need to be tackled before the process of artificial insemination begins (stanford.edu par. 4). These have been put into rights th...
6 Pages(1500 words)Case Study
sponsored ads
Save Your Time for More Important Things
Let us write or edit the essay on your topic "Benefits to Bailing Out the Big 3" with a personal 20% discount.
GRAB THE BEST PAPER

Let us find you another Essay on topic Benefits to Bailing Out the Big 3 for FREE!