Comments (0)
Add to wishlistDelete from wishlist
Cite this document
Summary
b) Preparation of Tender: This cost is not related to the production or manufacturing of the cabinet. Instead, it is an admin cost. According to accounting concept, admin costs are not charged to the manufacturing cost statements and instead they are included in the profit and loss account or the income statement…
Download full paperFile format: .doc, available for editing
HIDE THIS PAPERGRAB THE BEST PAPER96% of users find it useful 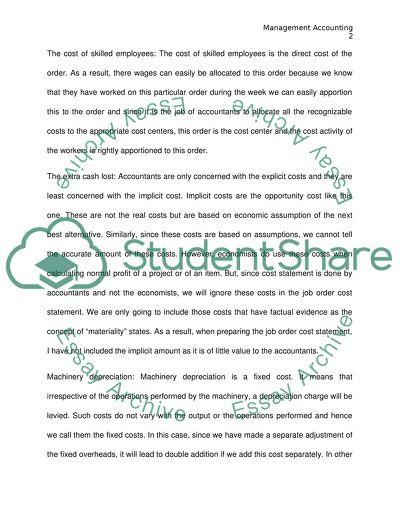 Download file to see previous pages This concept states that stock is valued at lower of NRV or cost. Since NRV is not given in this case, we will include the purchase price or the cost of stock which is 750 in this case.
The cost of skilled employees: The cost of skilled employees is the direct cost of the order. As a result, there wages can easily be allocated to this order because we know that they have worked on this particular order during the week we can easily apportion this to the order and since it is the job of accountants to allocate all the recognizable costs to the appropriate cost centers, this order is the cost center and the cost activity of the workers is rightly apportioned to this order.
The extra cash lost: Accountants are only concerned with the explicit costs and they are least concerned with the implicit cost. Implicit costs are the opportunity cost like this one. These are not the real costs but are based on economic assumption of the next best alternative. Similarly, since these costs are based on assumptions, we cannot tell the accurate amount of these costs. However, economists do use these costs when calculating normal profit of a project or of an item. But, since cost statement is done by accountants and not the economists, we will ignore these costs in the job order cost statement. We are only going to include those costs that have factual evidence as the concept of "materiality" states. As a result, when preparing the job order cost statement, I have not included the implicit amount as it is of little value to the accountants.
Machinery depreciation: Machinery depreciation is a fixed cost. It means that irrespective of the operations performed by the machinery, a depreciation charge will be levied. Such costs do not vary with the output or the operations performed and hence we call them the fixed costs. In this case, since we have made a separate adjustment of the fixed overheads, it will lead to double addition if we add this cost separately. In other words, the depreciation charge is already included in the fixed overheads and it will lead to distortion of the cost statement if we include a separate head for machinery depreciation. In more professional terms, these will windows dress the financial statement and hence will give a different picture to the cost statement than it is in reality. For the reasons given above, I have excluded the amount for machinery depreciation from the cost statement.
Electricity: The statement in the question tells us whether the order is received or not, the machinery will be in continuous use. Since all machinery is run on electricity, we can assume that the charge of electricity is also fixed. The entire costs related to machine are fixed as it is indifferent to the order and hence these costs will also be included in the fixed overheads. Hence by adding them separately, we will again be making a mistake of double debiting our cost statement. This again will distort the cost of the order in reality and will make us assume that we are incurring more costs than we really are. This is called as window dressing and should be avoided from both the ethical and legal point of view. Hence, this amount is excluded from the job order cost statement.
Fixed overheads: Certain indirect costs are incurred when a company is working on a ...Download file to see next pagesRead More
Share:
Tags
Cite this document
(“Managerial accounting Essay Example | Topics and Well Written Essays - 1000 words - 1”, n.d.)
Managerial accounting Essay Example | Topics and Well Written Essays - 1000 words - 1. Retrieved from https://studentshare.org/miscellaneous/1502126-managerial-accounting

CHECK THESE SAMPLES OF Managerial accounting

The Profit and Loss for 2006 of PSA Peugeot Citroen is presented Vertically as depicted in its annual report. Further, there are ‘Functional breakdown’ of expenses, as the headings of expense accounts are as per functions performed, e.g., Cost of Goods and Service sold, Selling, General, and Administrative Expenses, Research and Development Costs, and like that.

Legal Reserve is the reserve as required by any national law of the country of the European Union. This is depicted in the subhead of ‘Retained Earnings’ under ‘Equity’ of PSA Peugeot Citroen's Balance Sheet in accordance with Article 9 of the Fourth Schedule.

...IAS 17-ACCOUNTING FOR LEASES INTRODUCTION: A Lease may be defined as a contractual arrangement in which a party owning an asset (Lessor) provides theasset for use to another or transfers the right to use the asset to the user (Lessee) for an agreed period of time. Leasing essentially involves separation of ownership from the economic use of an asset. MAIN FEATURES OF IAS-17 1The objective of IAS17-Accounting for leases is to prescribe appropriate accounting policies and disclosures for Lessees and Lessors with respect to Finance and operating leases. According to IAS 17, a lease is classified as Finance lease if it transfers substantially all the risks and rewards associated with the ownership of the asset to the Lessee...
6 Pages(1500 words)Assignment

The efficient market hypothesis states that securities are typically in equilibrium and that they are fairly priced in th...
8 Pages(2000 words)Article
sponsored ads
Save Your Time for More Important Things
Let us write or edit the essay on your topic "Managerial accounting" with a personal 20% discount.
GRAB THE BEST PAPER

Let us find you another Essay on topic Managerial accounting for FREE!