Comments (0)
Add to wishlistDelete from wishlist
Cite this document
Summary
This papers draws out key similarities and dissimilarities in the work styles of the two great leaders of corporate world Mr. Gates and Kay Ash. The paper draws key conclusions on the management style of the Gates and Kay Ash. The leadership styles are compared with respect to least Preferred Co-worker theory and situational control parameters
…
Download full paperFile format: .doc, available for editing
HIDE THIS PAPERGRAB THE BEST PAPER94.7% of users find it useful 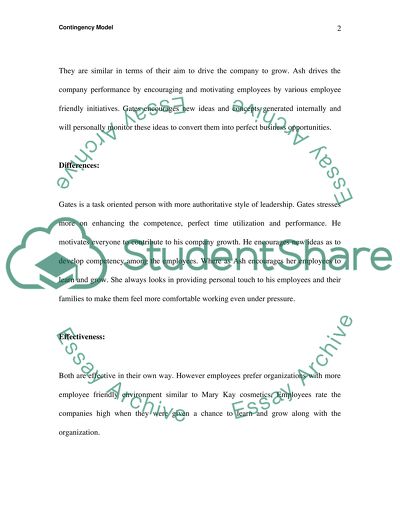 Contingency Model Introduction This papers draws out key similarities and dissimilarities in the work styles of the two great leaders of corporate world Mr. Gates and Kay Ash. The paper draws key conclusions on the management style of the Gates and Kay Ash. The leadership styles are compared with respect to least Preferred Co-worker theory and situational control parameters
Similarities:
According to the case study, Ash and bill gates depicts that Ash was more of people oriented personality who keeps driving her workforce towards the organizational goals. Where as Bill gates is more task oriented person who drives the concept of contribution from various ends of his organization. He prefer to monitor the progress of new ideas and innovation personally. He travels a lot to the respective locations to make his presence felt throughout his organization. He manages his time strictly to suit his work style and ranks his performance on the number of man hours utilized. He thus created an ambience where people will compete among themselves for a common purpose, performance. Mr. Gates keeps his organization in front of him rather than his personal agenda and he expects the same priorities to be set by his co-workers.
Relatively Mary Kay Ash markets his ideas internally with good people management skills. Ash puts people in front, she concerns about her employees. She manages trains and motivates her employees through different ways with an intention to make them more competitive and more responsible towards their work. Ash sends a positive impression that organization cares for them who come out with better performers.
They are similar in terms of their aim to drive the company to grow. Ash drives the company performance by encouraging and motivating employees by various employee friendly initiatives. Gates encourages new ideas and concepts generated internally and will personally monitor these ideas to convert them into perfect business opportunities.
Differences:
Gates is a task oriented person with more authoritative style of leadership. Gates stresses more on enhancing the competence, perfect time utilization and performance. He motivates everyone to contribute to his company growth. He encourages new ideas as to develop competency among the employees. Where as Ash encourages her employees to learn and grow. She always looks in providing personal touch to his employees and their families to make them feel more comfortable working even under pressure.
Effectiveness:
Both are effective in their own way. However employees prefer organizations with more employee friendly environment similar to Mary Kay cosmetics. Employees rate the companies high when they were given a chance to learn and grow along with the organization.
Which leader would you prefer to work for Why
I would prefer to work with Mary Kay cosmetics as it provides an environment where an employee can balance my work pressure with professional growth and friendly work environment.
Conclusion:
On a whole we can observe that Gates possess an authoritative leadership style with less concern on the employee relation. Mac Kay was successful in implementing employee friendly initiatives and has drive the growth of the company aggressively throughout her career.
Reference:
http://www.student.euv-frankfurt-o.de/euv-5327/lead_1.php
http://changingminds.org/disciplines/leadership/theories/fiedler_lpc.htm Read More
Share:
Tags
Cite this document
(“Contingency Model (DB) Essay Example | Topics and Well Written Essays - 500 words”, n.d.)
Contingency Model (DB) Essay Example | Topics and Well Written Essays - 500 words. Retrieved from https://studentshare.org/miscellaneous/1502119-contingency-model-db

For this reason, it has been supported by Leslie (1997, 4) that “many discussions in the literature get bogged down in the mathematics of Black Scholes valuation when they go beyond the conceptual level; however managers dont need to be deeply conversant with the calculation techniques of real-option valuation”. The particular model can be found in the Appendix section. It should be noticed in any case the Black-Scholes model has originally developed for the pricing of options. However, its potential use in different sectors at the next stage cannot be rejected. As for the potential use of the specific model in the energy sector, this could be considered as rather difficult to be completed mostly because this model wou...
11 Pages(2750 words)Assignment

...It is always an interesting point to learn many things about the society. That is why there are prevailing theories used in order to make this learning a possibility. Among these theories are the social learning theory and the social model theory that have essential applications in social work. For this reason, the work at hand presents these two theories by using relevant theoretical frameworks in order to investigate their application and relationship in the social concept of power and social work values. Origin and application of social learning theory Social learning theory, a theory developed by Albert Bandura in 1963, originally has its inspiration from Skinner’s reactive mechanical model of behavior, but later, it turned out...
9 Pages(2250 words)Coursework
sponsored ads
Save Your Time for More Important Things
Let us write or edit the essay on your topic "Contingency Model (DB)" with a personal 20% discount.
GRAB THE BEST PAPER

Let us find you another Essay on topic Contingency Model (DB) for FREE!