Comments (0)
Add to wishlistDelete from wishlist
Cite this document
Summary
The two countries that I select for this essay each show a very different perspective on contemporary women's workplace rights. Canada is known today as one of the leading humanitarian countries in the world. Women are able to receive the necessary protection in the workplace, as well as fair rights…
Download full paperFile format: .doc, available for editing
HIDE THIS PAPERGRAB THE BEST PAPER97.1% of users find it useful 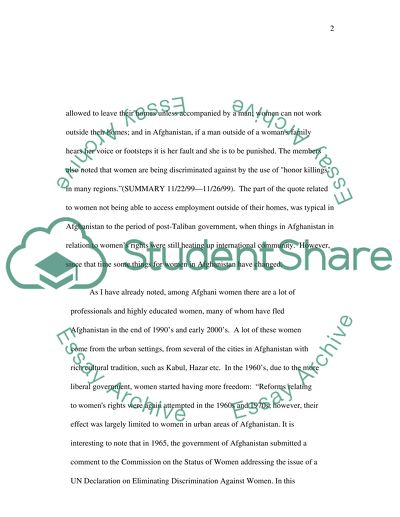 Download file to see previous pages Women's workplace rights in Afghanistan have been practically non-existent in those years. This is in contrast to the 1960's when women in Afghanistan, under a more liberal government, started working as air hostesses, doctors, health care professionals, nurses, etc.
The following quote is from a thread posted by International Women's Rights Summary, ('99): Members from Afghanistan and Turkey listed some of the discrimination towards women, which is incorporated into law: women are not
hears her voice or footsteps it is her fault and she is to be punished. The members also noted that women are being discriminated against by the use of "honor killings" in many regions."(SUMMARY 11/22/99-11/26/99). The part of the quote related to women not being able to access employment outside of their homes, was typical in Afghanistan to the period of post-Taliban government, when things in Afghanistan in relation to women's rights were still heating up international community. However, since that time some things for women in Afghanistan have changed.
As I have already noted, among Afghani women there are a lot of professionals and highly educated women, many of whom have fled Afghanistan in the end of 1990's and early 2000's. A lot of these women come from the urban settings, from several of the cities in Afghanistan with rich cultural tradition, such as Kabul, Hazar etc. In the 1960's, due to the more liberal government, women started having more freedom: "Reforms relating to women's rights were again attempted in the 1960s and 1970s; however, their effect was largely limited to women in urban areas of Afghanistan. It is interesting to note that in 1965, the government of Afghanistan submitted a comment to the Commission on the Status of Women addressing the issue of a UN Declaration on Eliminating Discrimination Against Women. In this comment, it stated eliminating discrimination required the "combating of traditions, customs, and usages which thwart the advancement of women" and
went on to advocate the use of affirmative action policies to aid women in
overcoming the discrimination they faced." (Women in Afghanistan, 2006).
The discrimination referred to relates to the deeply entrenched cultural traditions of suppressing women's identity, their right to work outside of the home, and their rights to be educated. Nevertheless, there have been ongoing schools for girls, and many teachers in Afghanistan have traditionally been women. Thus Afghani women are not uneducated.
This last refers even to the residents of rural areas, who have been forced to flee Afghanistan as refugees. Being in foreign countries, these women refugees have had access to education.
One of the issues I wish to look at is maternity leave in both countries. Here is a definition of maternity leave, as given by Canadian Parental Leave (2006): '"Pregnancy" leave (also ...Download file to see next pagesRead More
Share:
Tags
Cite this document
(“Workplace Rights: Canadian Women Versus Afghani Women Essay”, n.d.)
Retrieved from https://studentshare.org/miscellaneous/1501927-workplace-rights-canadian-women-versus-afghani-women

Internal communication in any organization has been found to play a significant role in regard to role achievement in any business venture. When the internal communication department closely works with the top management, it has been found that job satisfaction levels rise which in effect translates to higher individual and group output from the workers (HRM guide, 2009). It is the role of the internal communication department to ensure that the strategic organizational direction is passed on to all employees and followed as planned so as to guarantee the achievement of intended outcomes.
With the current developments towards globalization, knowledge availability has become more readily available and the economy has approache...
9 Pages(2250 words)Assignment
sponsored ads
Save Your Time for More Important Things
Let us write or edit the essay on your topic "Workplace Rights: Canadian Women Versus Afghani Women" with a personal 20% discount.
GRAB THE BEST PAPER

Let us find you another Essay on topic Workplace Rights: Canadian Women Versus Afghani Women for FREE!